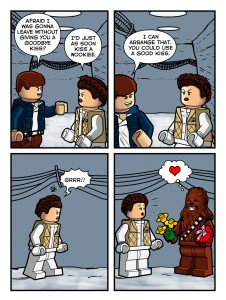 Poor Chewie. He doesn’t even get recognized at the medal ceremony at the end of A New Hope (though to be fair neither did the other two surviving pilots on the Death Star assault, Red 2 Wedge Antilles and Gold 7 Keyan Farlander. Where are their medals huh?). He’s not bitter or anything. Ever the loyal soldier, he follows Han and joins the Rebel alliance and relocates to Hoth. I wonder if he’s ever resented Han for that whole medal ceremony deal. I’m sure he thinks about it, ’cause he seems awfully eager to take advantage of a particular situation. Will Chewie finally come out on top? For once?

And for the record, this is last week’s comic. It’s entirely my fault that’s being posted a few days late. We’re going to try and get back on track this week.

And yes we still have our regular story line. We’re just banking that for when we get desperate for jokes.

In other news, I’d like to give a big thanks to those who responded for our call for volunteers. Our time grid is nearly filled so if you’re thinking about volunteering, don’t hesitate to shoot us an email. For those of you who did respond, I sent back verification instructions. The deadline to submit t-shirt sizes for the volunteers is quickly approaching, so if you decide to respond later, you might get stuck with a shirt too small or too big. And we can’t have that now can we?