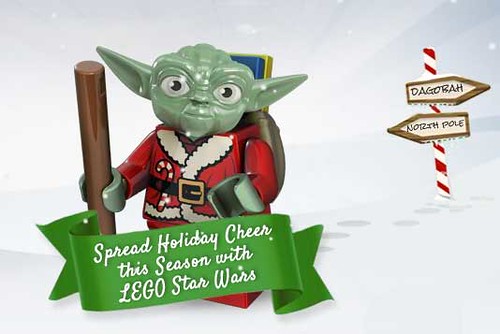 Okay. First, let me apologize for my absence. I really have no excuse other than the break I took was needed and fully enjoyed even if the timing was not the best. And now the update: despite what the LEGO Santa Yoda site said for total donation, I think it was just under 700k the last time I checked, I’ve received word that LEGO has generously donated 1 million toys to Toys for Tots. Yes, 1 million toys. The cynic in me wants to see proof of this, since we only have their word to go on, but I don’t want to be that guy. I’ll trust what they tell me, and if they say that 1 million toys were donated, that means 1 million more kids enjoyed a LEGO filled holiday.

Looking back on our efforts, it’s pretty obvious our efforts to hit that magic number caught them off guard where they throttled submissions to the point that reaching the goal was rendered impossible. Still, it warms the cockles of my heart knowing that there were people out there just as impassioned as I was to see LEGO donate as many toys as possible.

I’ll be taking care of the drawing of the prizes in the next few days. I know it’s already a month behind the close of LEGO Santa Yoda (even though the site was taken down a few days ago), but I’ll catch up. Please stay tuned.