I still can’t figure out what this is:

PROGRAM TO CELEBRATE
MOMENTS OF INSPIRATION

ENFIELD, Conn. (January 11,
2010) â€“ Think of that little bolt of excitement that
hits when the solution to a problem suddenly becomes clear. Thatâ€™s a
CLICK moment in action.Â  Consider times when a great idea comes out of the
shadows of the brain and needs to be shared. Thatâ€™s a CLICK moment, too.
Today, LEGO Systems launches a program to celebrate and foster these â€œCLICK
momentsâ€, jump-started by the companyâ€™s announcement of its first
official iPhone application, LEGOÂ® Photo, available for free at
the iTunes App Store.

The hub of the program,
www.LEGOCLICK.com, is a virtual canvas of ideas, inspired moments, quirky
stories, solutions and tips from serial CLICKers designed to celebrate and
inspire CLICK moments of all types.

â€œWe hope to motivate
people to recognize, embrace, share and yes, chase, those unpredictable but
powerful light bulb moments in life when things just CLICK,â€Â said
Michael McNally, brand relations director at LEGO Systems, Inc.
â€œExploring your imagination from a young age, daring to realize your
ideas, creating stories and uses for what you create, solving problems that no
one knew existed â€“ this is the stuff of LEGO play, and is exactly what
leads to a lifetime of CLICK moments.â€

LEGO Photo is an application
for iPhone and works with the iPhone and saved images on an iPod touch that
lets consumers immortalize their favorite things â€“ or their own CLICK
moments â€“ in LEGO form. Users can simply choose a photo from an existing
gallery or point the camera to snap a photo then touch the screen to watch
their masterpiece build. Additional screen taps shows portraits in nine
different color palette options. Celebrating CLICK portraits is easy. Users can
upload to a social networking page, email it to grandparents and friends, print
it–even tweet it using #legoclick.

LEGO Photo is available for
free download from the iTunes App store; a link from the companyâ€™s blog
at LEGOCLICK.com makes it easy to find the app directly. The best LEGO
portraits use photos that are shot at close range against a light, solid
colored background.

Created especially for LEGO
Systems by the team behind groundbreaking music videos for Coldplay, The
Chemical Brothers and New Order among others, the 3:19 film reveals the story
of a fictional inventorâ€™s journey to the joy of his CLICK moment,
inspired by millions of true stories of children who have realized a big idea
using imagination, perseverance and sometimes even LEGO bricks.

A pile of LEGO bricks is
what motivated the production team to create a visual vignette â€“
punctuated with whimsical animation and a playful, original score â€“ that
celebrates the sometimes simple and often sublime attainability of a CLICK
moment.Â

Fans of lifeâ€™s CLICK
moments can join the conversation on this blog that celebrates light bulb
moments, grand or understated. A conversation about what makes things CLICK,
the blog shines a light on those people whose ideas have helped to inspire
others, or those little moments when an idea is incubated or
launched.Â Guest contributors will share stories of how things CLICKed for
them, ideas for how to find a CLICK moment and photo and video inspiration to
tickle the inner creator in anyone.

I downloaded the LEGO App and here’s my 10 cent review:

The Good: You can take a pic or use an existing pic in your photo library on your iPhone and apply a filter on it to see the how the picture would look as a LEGO Mosiac. Once a mosaic is generated, you can save the image to your camera roll. The app is free.

The Bad: You can’t do anything with the pic besides save it to your camera roll. No instructions, no higher resolution option, nothing. How awesome would it be if you can “Order This Mosiac” directly from LEGO? Anyways, once you select the image you want to alter, there is a little timer to show you the progress. And once that’s done, you have to tap on a button to see the image. The app should automatically take you to the image once it’s done processing. Like the press release states, you can tap on the mosaic to change the color palette from warm reds and yellows to cool blues to black and white, etc. However, there’s no rhyme or reason as to where to tap for a specific palette, it seems that the app just cycles through each palette, so you can pretty much tap anywhere. There is a cool little ripple effect animation when the palette changes, but that gets old fast.

The Ugly: The pictures are just horrendous. I understand there’s a limited palette of colors, but that’s not really the issue. The issue is that the the 3 megapixel image is dumbed down to LEGO stud dimensions of 40×60. Take a look at a before and after pic below: 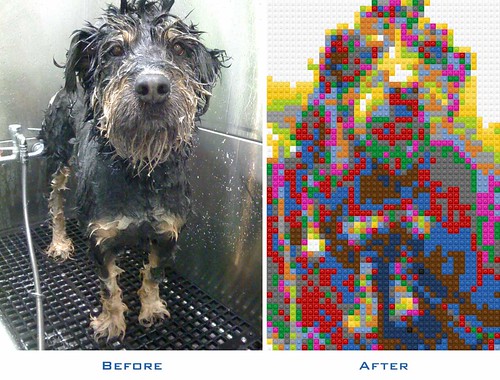 And just for kicks, I took a screen capture of the screen you’ll stare at while your image is being rendered to see how a simpler image would turn out: 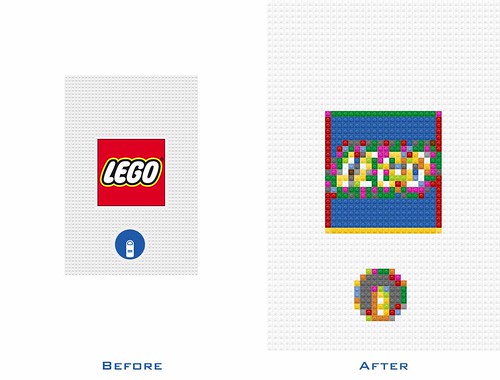 And no, I did not tap to apply a different color palette. White was the only color it got correct.

Final Verdict: For a free app, it’s certainly not the worst, but as an AFOL, I probably won’t be turning this one on again. For parents, it might be good enough to keep kids occupied for a little while, but I myself wouldn’t subject my daughter’s eyes to such ugliness.

I don’t know why you’d want to, but you can download LEGO Photo