When I was a kid, which sadly, was probably before most of you were born, I had a few favorite toys. One, of course, was LEGO stuff. The sheer amount of houses, cars, and space ships I built was beyond belief. GI Joe, of course, being a child of the 80s. Transformers, and, yes, GoBots (my all time favorite was the shuttle GoBot, even more than my Bumblebee or Starscream Transformers… in fact, I still have that, while the transformers were long ago consumed by garbage bunnies).

But past all of those, there were my army men. I had buckets of them, tanks, planes, and the epic battles of history all fought in my sandbox, on the basement floor. Opposing sides were ground under with balls, marbles, nerf guns, the occasional swipe of the hand. I probably had thousands of the things, in tan and green (really the only colors that existed back thenâ€¦ donâ€™t believe me, go ask someone older than 25).

So when I saw that LEGO was releasing Army Men as part of the Toy Story line, the first thought in my head was â€œI am going to buy the *bleep* out of that set.â€ Seeing two great childhood memories jammed together is like learning that Santa Claus is real, and heâ€™s also a ninja that rides a dragon mounted with lasers instead of a sleigh.

Anyway, this set is what originally got me excited in the Toy Story line, and it still stands out as one of the best values. Itâ€™s effectively a battle pack, I suppose, with four figures and a LEGO jeep. One of the helmets has a medic cross, and the set can best be described as â€œvery green.â€ Green minifig implements, green parts (save the axles, tires, and a couple random plates. And yet, it works, because thatâ€™s what captures the awesomeness of being a set of LEGO Army men.

Really, this whole thing is about the minifigs, which are done quite well, save the printing on the face. Iâ€™m not sure if itâ€™s just the nature of how it was printed, the contrast between black and green, or intentional since army men faces were never well defined, but the printing is extremely light on these. The printing doesnâ€™t seem to be as light on the torso, so Iâ€™m leaning towards intentional.

Details wise, the army â€œshirtâ€ is a good uniform print, and no doubt, there are already a gajillion builds swapping out the green faces for yellow or flesh and building WWII themed MOCs. Even Iâ€™ve wondered how many Iâ€™d need to make a Battle of the Bulge scene. Of course, for that, thereâ€™s the need to swap out green weapons for neutral colored ones, but Indy, Batman, and even the older sets have given us plenty to choose from for â€œwarâ€ type weapons. 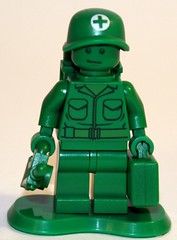 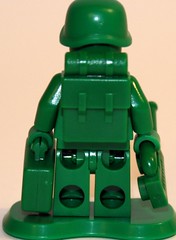 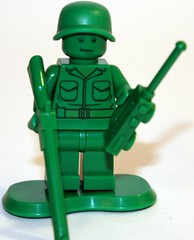 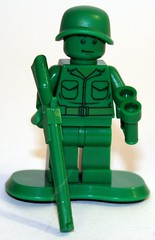 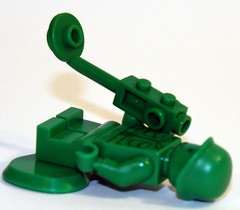 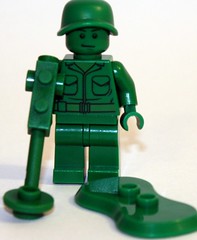 The jeep itself is well done, if simple. I wish it had a â€œglassâ€ windshield instead of green, simply because that was one of the few things on that sort of army men toy that was usually clear. It also could have used a nice star or similar sticker to set it off a bit more, but since the jeep was never even seen in the movie, I suppose thatâ€™s asking a bit much. 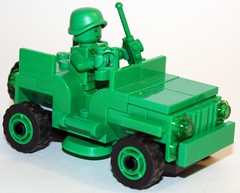 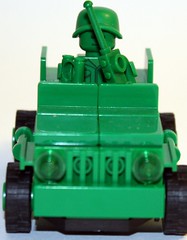 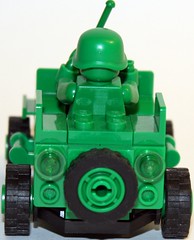 Sadly, the biggest problem with this set is that it’s so LEGO, and loses some of the real charm of being army men. I still love it, but Army Men are about positions. There’s no mortar, no handguns, and you can’t get them into most of the positions. In the comparisons below (with the Toy Story replicas from the first movie… just imagine R. Lee Ermey reciting this whole review, maggot), the sizing is fairly close, but you can see the variety of poses. These are fairly typical designs, and the figures can’t really make most of them. Plus, there’s no parachute, sadly. And that would have just been awesome to have a LEGO parachute.

Ultimately, LEGO added a lot to a simple part of the Toy Story mythos, and gave us a sideways shot at getting military figures, something I know a lot of hobbyists have always wanted. Itâ€™s a simple set, but certainly has value. Like a lot of the Toy Story line, Iâ€™m not sure how much you can build with it outside of what it was designed to be, but thatâ€™s really never been the point of battle packs, now has it?