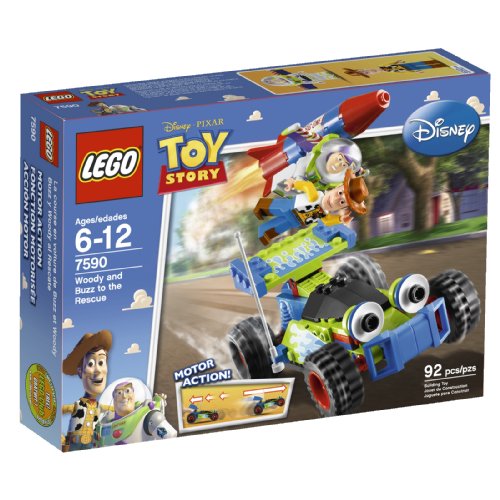 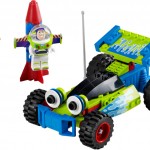 Toy Story sets hold a special place in my heart. Not just because they capture one of my favorite movies, or come from the mighty Pixar, whose movies have set a standard that all animation, and even all movies, try to ascribe to. No, I love these sets because they created a sense of excitement in me that I hadnâ€™t really felt since the first Star Wars sets hit. They are unique, and the first of the Disney line, capturing something that is already unique, and making it special.

Woody and Buzz to the Rescue captures a memorable scene from the first movie, the finale, actually, and captures it almost perfectly. RC Is rendered stunningly, and looks great compared to the movie. 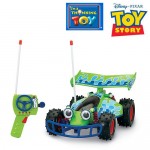 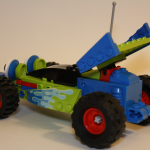 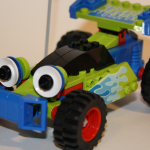 Interestingly, the set bricks are all printed, no stickers at all in the set (unlike most of the rest in the line). Not to mention, so many nice colors. The wheels are as good as you can get with LEGO without a new rubber mold, but they do lack the nubs of movie-RC. The antenna is another tack-on, since it doesnâ€™t have the red spot at the top, and itâ€™s not white, but thatâ€™s somewhat of a minor point.

Itâ€™s really hard to pin down accuracy on this model. As you can see in the picture above, RC looks great. Woody Looks great. Buzz looks great. But Woody and Buzz are so much smaller than RC that it throws scale completely out the Window. As youâ€™ll see in my Army Men on Patrol review, this is where that same LEGO style starts to suffer. The figures are all individually spot-on, but they donâ€™t show exactly how varied the sizes in the toys in the movie are. 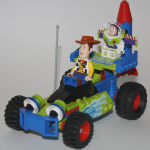 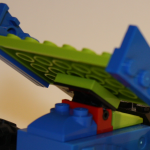 One frequent problem Iâ€™ve had with this set, though, is the rear spoiler falling off at the slightest little brush. Only a single 2×1 hinge holds it in place, and even the spoiler alone can tax that. Add to the fact that itâ€™s designed to have Buzz sitting on top of it as well, to recreate the movie, it just falls off way too much. I would love to see if anyone has modded this thing to keep it from falling off.

The pull-back function is decent, and itâ€™s nice to see the racers sets finally being put to use. Obviously, having the motor in the set lowers the ratio, which at .16 / part is already high. Thatâ€™s really not all that surprising for a licensed set these days.

What is missing, sadly, is the RC controller for the car. It was an important part in the movie, and wouldnâ€™t have taken a whole lot to get it looking right.

Minifigs are where the entire Toy Story line really shines, at least for looks. I mean, this set, like all the others, absolutely glows. LEGO Woody is the perfect fusion of that Toy Story look and LEGO style. Buzz is just great, and the hood and wings will eventually work their way into a wide variety of MOCs, Iâ€™m sure. Even with the unique printing and looks, thereâ€™s just a lot of promise. 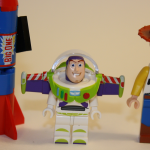 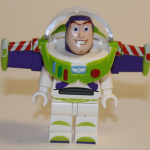 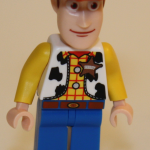 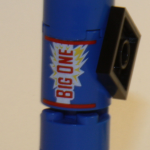 The faces are sculpted on all the Toy Story figures, which sadly mean Woodyâ€™s hat is attached. This does give us the benefit of having hair along with the hat, instead of the blank head weâ€™re normally treated to. Luckily, everything else about the minifig, the legs, torso, arms, are all exactly as weâ€™d expect them. So that means some nice extended arms and legs, something very unique and full of promise. And extra props for printing on the pull string on the back of his torso! 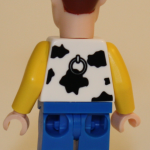 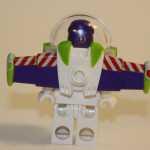 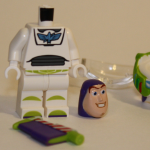 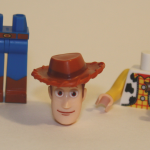 Buzz is just spot-on for the look and style, down to the buttons. The face is just perfectly printed, complete with eyebrows and that little cleft. The only knock I have on his figure is the fact that the wings are only capable of being installed straight-out. Great if you want to recreate Buzz Flying, but most of the time, he had them down.

So really, you get an iconic set with the two main minifigs for the line, a great representation of another character. Itâ€™s a bit small, but itâ€™s good both as a toy (pull-back car) and as Toy Story. Itâ€™s a solid, if simple, set, and a worth addition to any collection. Itâ€™s not a strong set for parting out, but to build what it comes with, youâ€™d be hard pressed to do better.