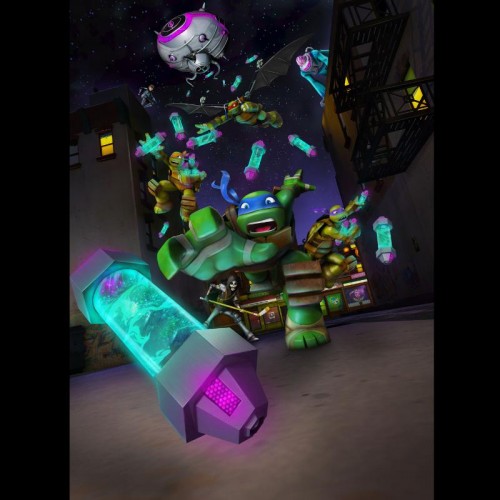 Check your DVRs! In a press release communicated yesterday, Nickelodeon announced the date for the season 2 premiere of their hit show Teenage Mutant Ninja Turtles. The show, titled The Mutation Situation, airs at 11:00am ET/PT on October 12, 2013 and has the turtles learning that the Kraang survived their previous encounter and has dropped mutagen canisters all over the city. Their mission throughout the second is to retrieve these canisters. Fans of the comic and previous iterations of the show will recognize the show’s newest star: Casey Jones, who will be voiced by Nick alum Josh Peck.

We’ve shown the trailer for season 2 before, along with a slew of other preview goodies, but we’ll post it here again, followed by the official press release.

Nickelodeon’s Heroes In A Half Shell Return To Battle Saturday, Oct. 12, At 11:00 a.m. (ET/PT), During The Season Two Debut Of Teenage Mutant Ninja Turtles

BURBANK, Calif., Sept. 26, 2013 /PRNewswire/ — Nickelodeon launches season two of the hit animated series, Teenage Mutant Ninja Turtles, Saturday, Oct. 12, at 11:00 a.m. (ET/PT), continuing the crime-fighting adventures of the four mutant turtlesâ€”Leonardo, Raphael, Donatello and Michelangelo. The season one finale ranked as the number-one telecast for the day across all TV with boys (August 8, 8-9:00 p.m. ET/PT). The half-hour weekly series is layered with comedy, action and sci-fi, and the unique CG animation draws inspiration from both American and Japanese animation, showcasing a stylistic effect of a printed comic. Teenage Mutant Ninja Turtles airs regularly on Saturdays at 11:00 a.m. (ET/PT) on Nickelodeon. The executive producers for season two are Ciro Nieli and Peter Hastings.

Nickelodeon alum Josh Peck (Drake & Josh) rounds out the cast this season as TMNT fan-favorite Casey Jones, a teenage hockey player with a rebellious attitude and a lust for cracking down on bad guys.

Season two starts off with a bang in the premiere episode, “The Mutation Situation.” In the episode, the Turtles discover that the alien Kraang survived their previous showdown and now have dropped mutagen canisters all over NYC. Throughout the season, the Turtles’ mission is to recover the canisters before more mutants can be created. Meanwhile, the Kraang and Shredder have united to put an end to the Turtles once and for all, which results in some very scary characters coming after the brothers. With Casey Jones’ help, the Turtles take on some of the most bizarre and dangerous villains they have ever seen, all the while trying to unravel the mystery regarding April O’Neil and her importance to the Kraang.

Teenage Mutant Ninja Turtles Vol.3 will be available on iTunes with a free re-cap of season one starting October 7. All new episodes will be available for purchase on iTunes, Xbox Video, Amazon Instant Video, PlayStation Store, Vudu and Samsung Media Hub, and also for streaming on the Nick App day after air. Fans can also visit Nick.com and the Nick App for exciting teaser clips, music videos and mash ups, and compilation videos showcasing the best butt-kicking moments of the series.

Nickelodeon, now in its 34th year, is the number-one entertainment brand for kids. It has built a diverse, global business by putting kids first in everything it does. The company includes television programming and production in the United States and around the world, plus consumer products, online, recreation, books, and feature films. Nickelodeon’s U.S. television network is seen in almost 100 million households and has been the number-one-rated basic cable network for 18 consecutive years. For more information or artwork, visit www.nickpress.com. Nickelodeon and all related titles, characters and logos are trademarks of Viacom Inc. (NASDAQ: VIA, VIAB).