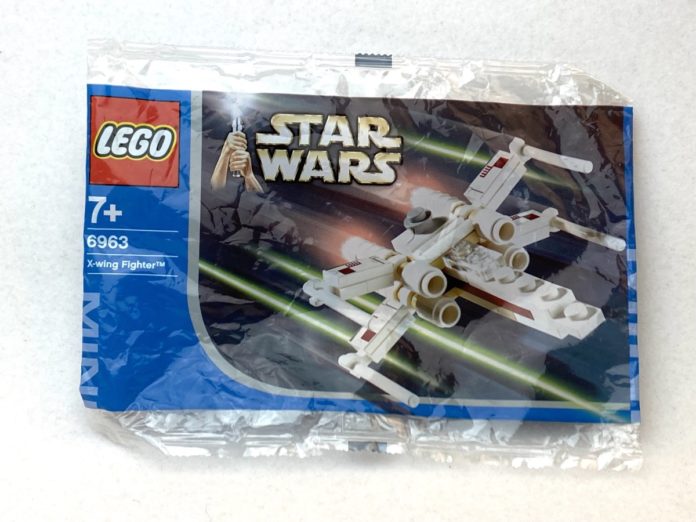 My first encounter with today’s polybag set, 6963 X-wing Fighter, was through a Japanese candy promotion. The name “Kabaya” comes to mind but I can’t be 100% sure. There were three small polybag sets as part of the promotion: this one, 6964 Boba Fett’s Slave I, and 6965 TIE Interceptor. Not sure how I scored this bag, probably Bricklink, but it’s a nice one. 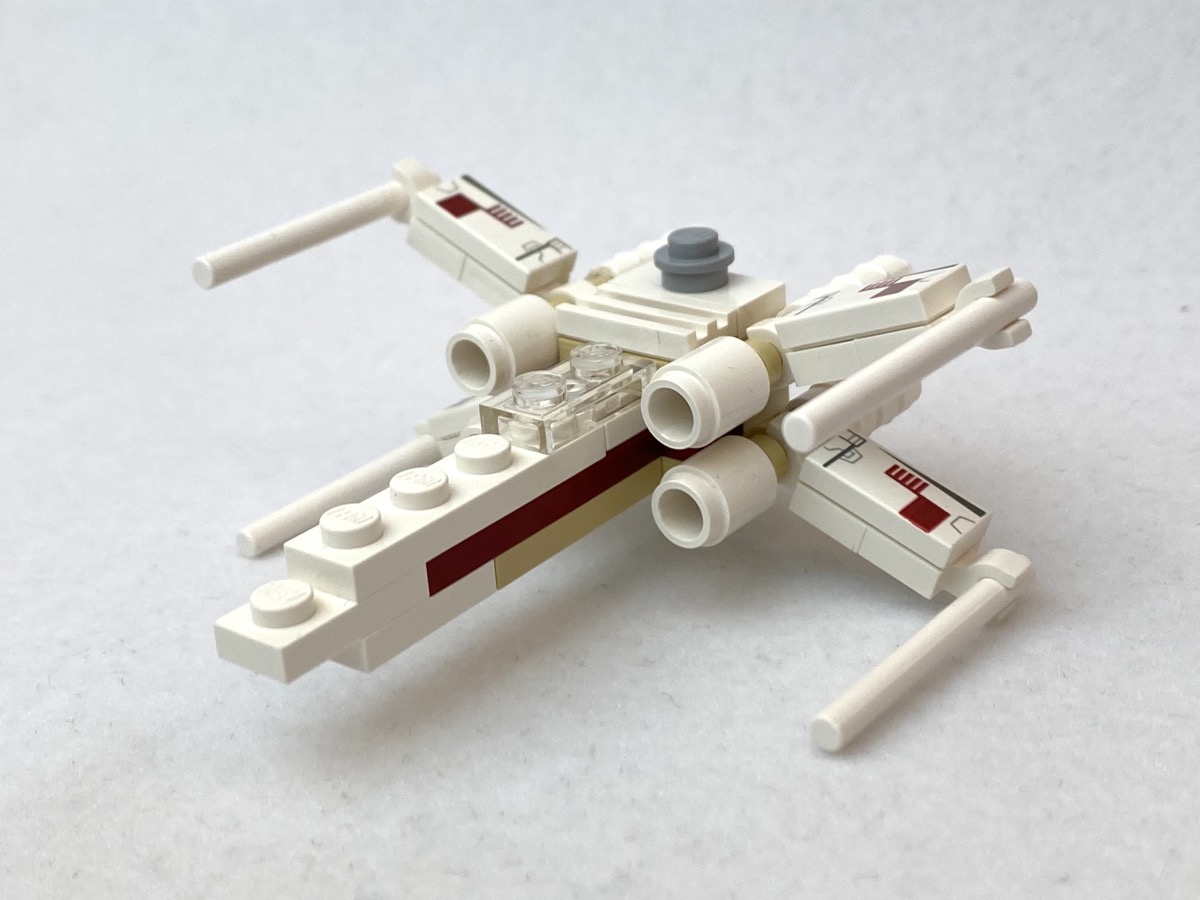 It was released in 2004, and it looks like it. The main fuselage is all studs up, there’s not a cheese slope in sight since they weren’t made yet, and the four laser cannons are just lightsaber blades in white. 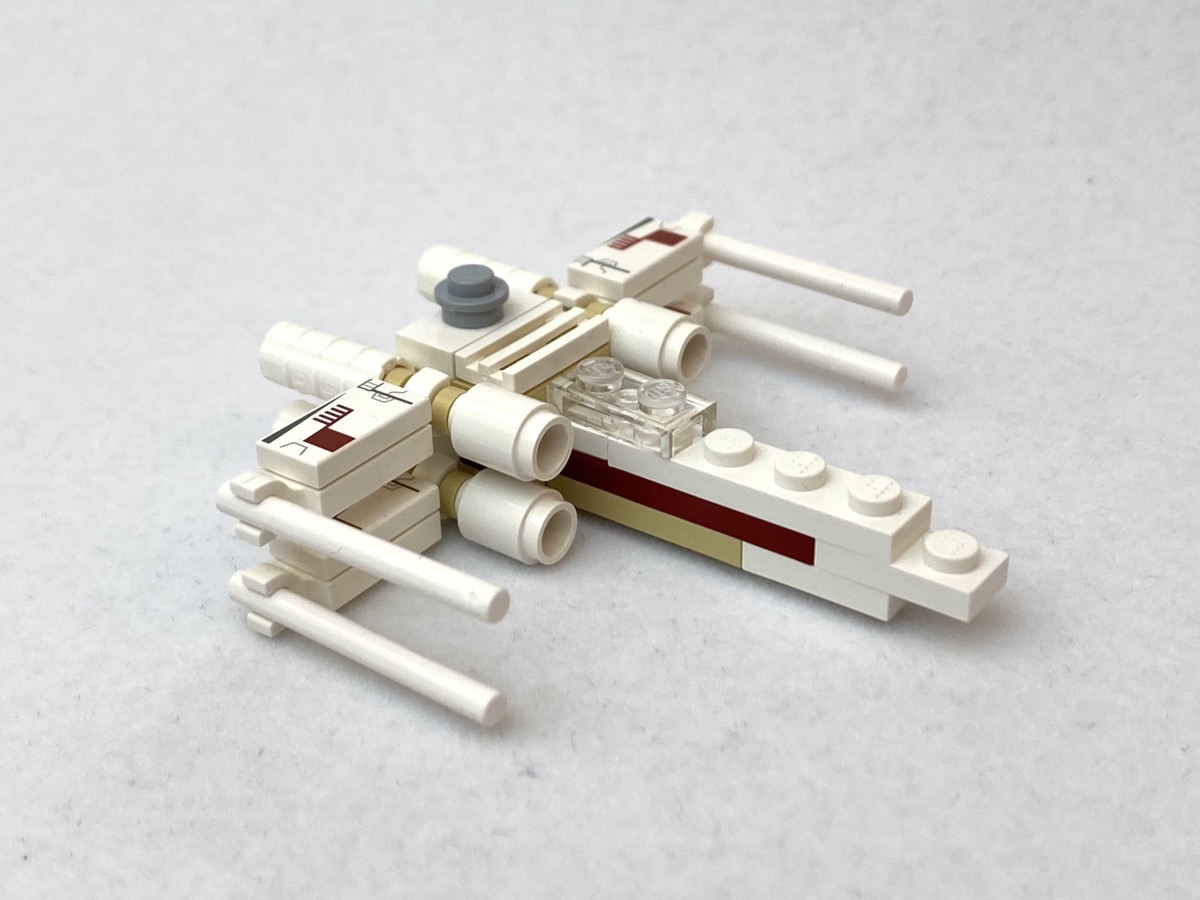 Those aren’t really criticisms though; this is the best way an X-wing could have been made 18 years ago. It hits all the right notes, building on the key characteristics of what makes an X-wing an X-wing. 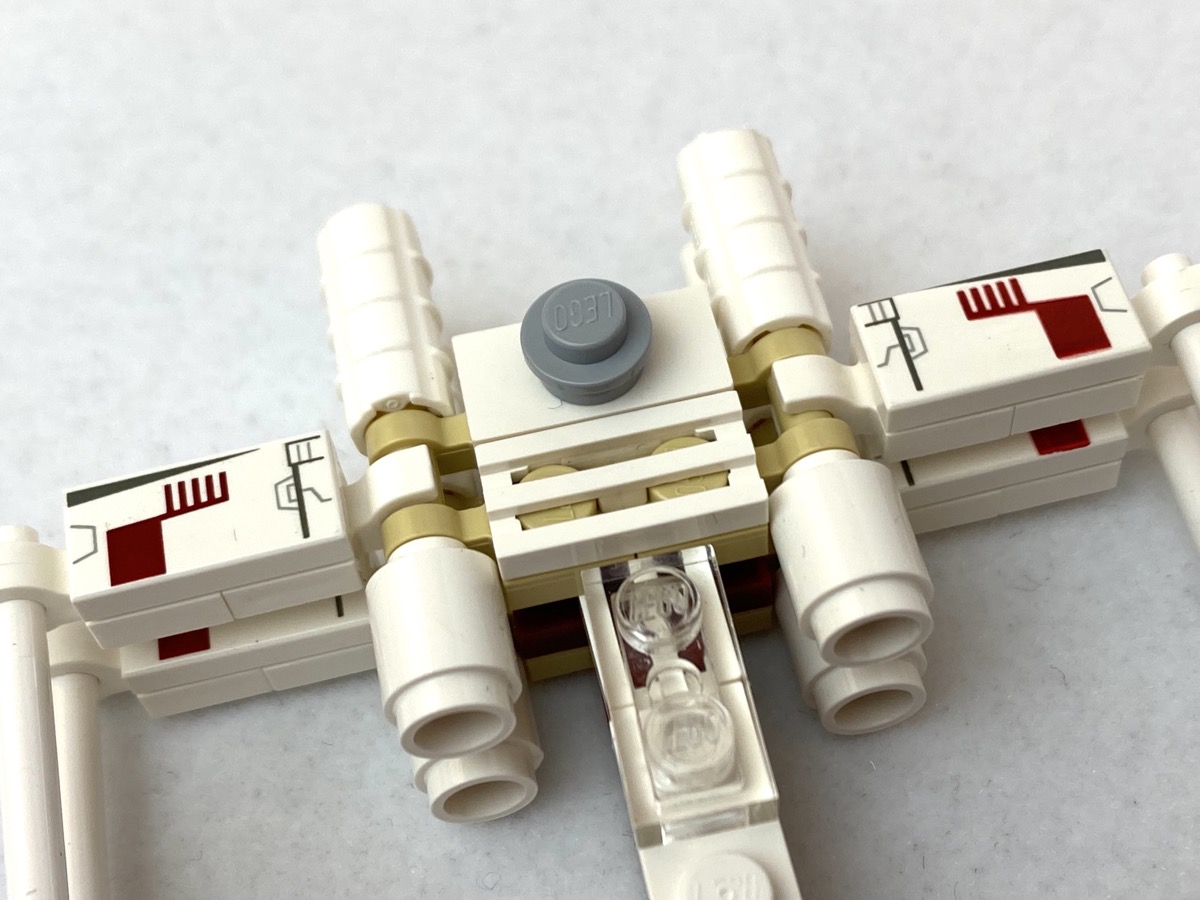 The ship is mostly white and dark red. The 1×2 plates with bar handle are in tan which adds a bit of visual interest and an additional color without being too garish. The intakes and the engines are a bit exaggerated at this scale but it can’t be helped.  There’s a grey 1×1 round stud to represent the astromech droid, in this case R2-D2. And how do I know this is R2-D2? Because this is Red 5. How do I know this is Red 5? Because of the printed tiles! 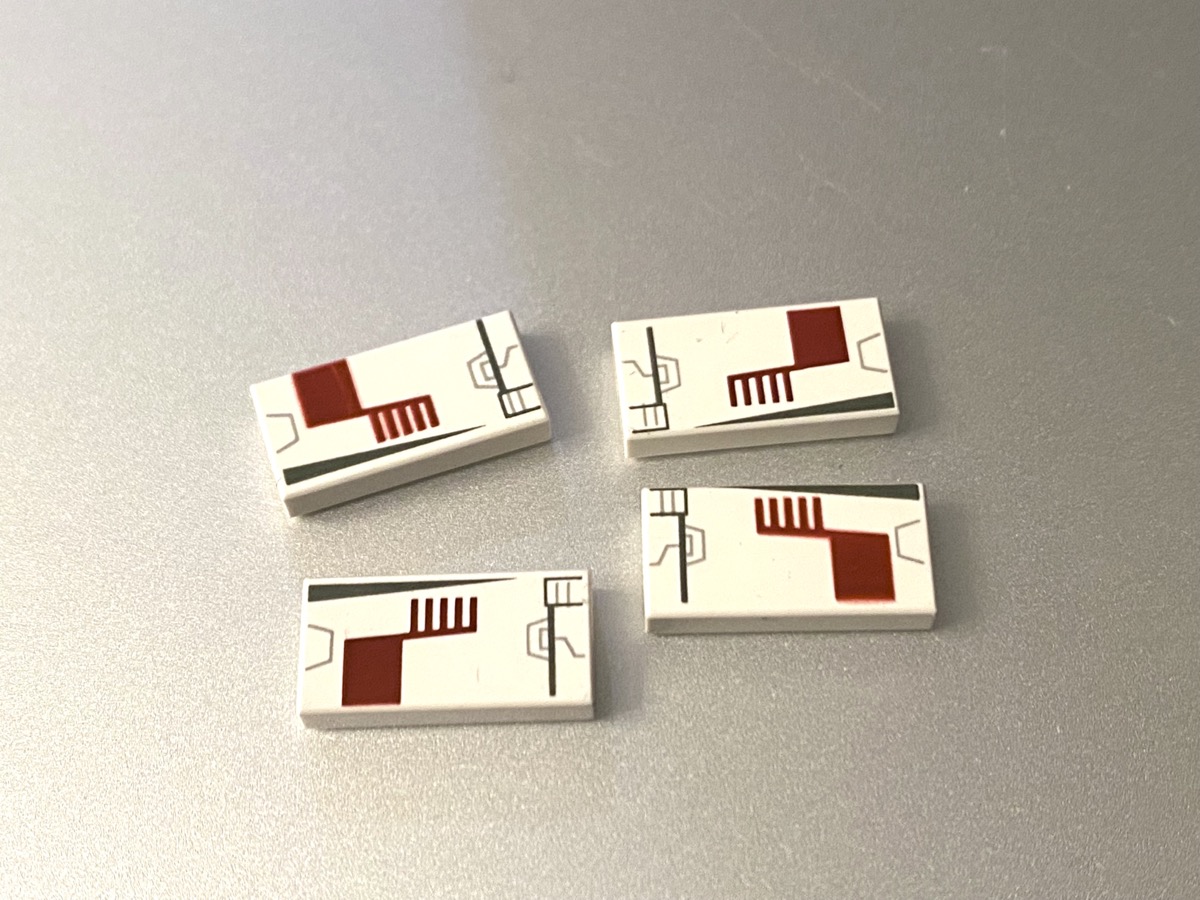 These are, bar none, the best thing to adorn a mini X-wing, second to ski poles for the laser cannons. The tiles are paired, two for the left side of the ship, two for the right. Each tile has five distinct stripes printed on them solidly identifying this ship as Red 5. 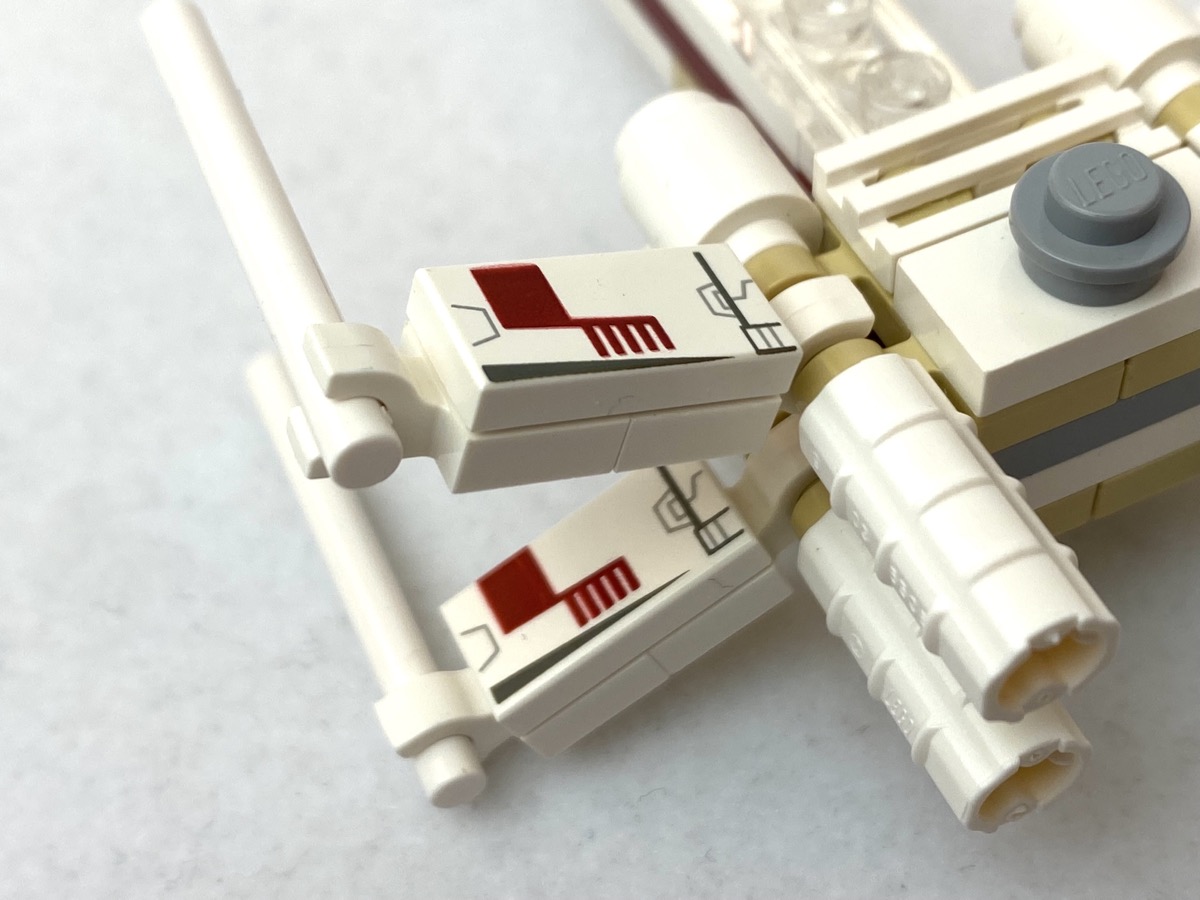 These tiles were unique to this set, with this exact same model showing up in a mini two-pack a year earlier, 4484 X-wing Fighter & TIE Advanced. With this polybag basically being a repeat of that X-wing, there wasn’t much reason for anyone to seek this one out. Unless, of course, you’re a polybag nut like I was. 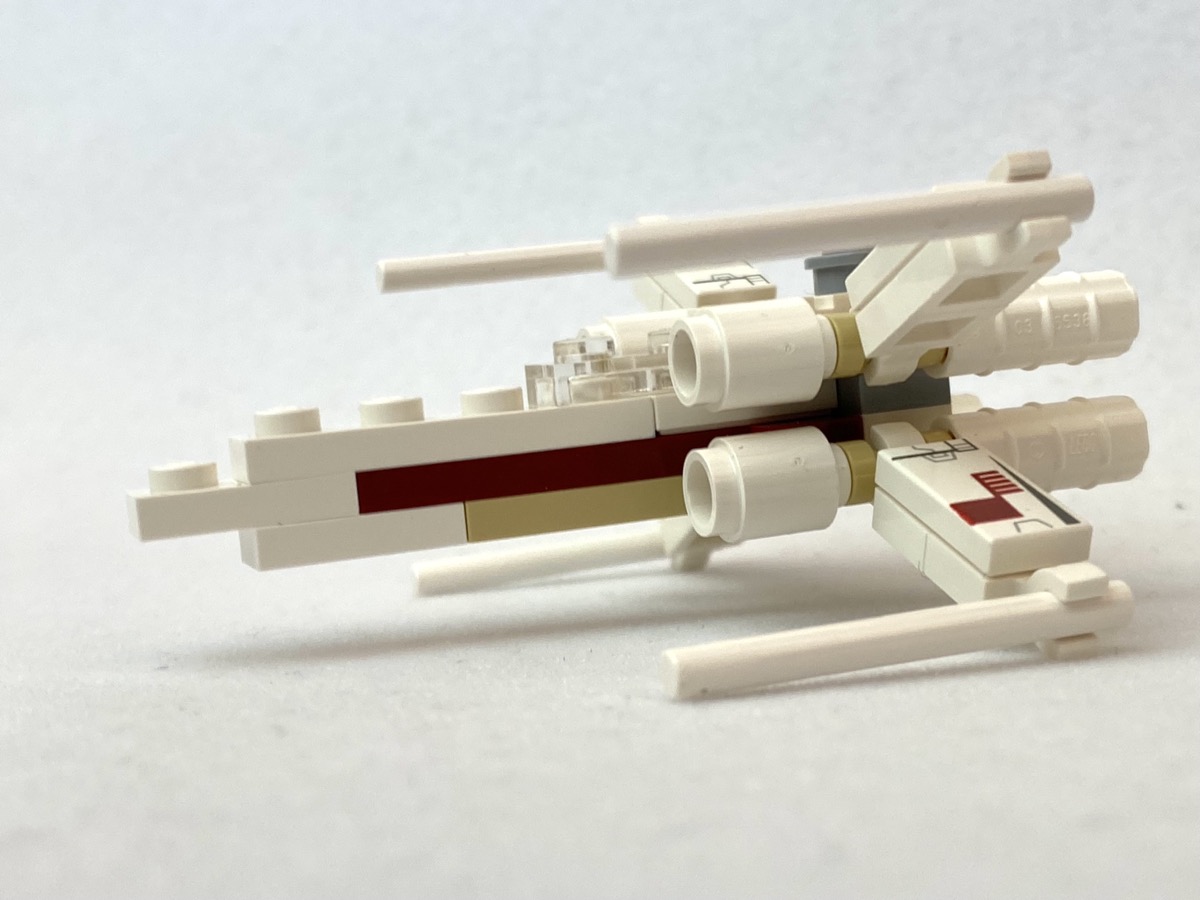 This set rocks! It may not be the greatest X-wing model, but the printed tiles really adds a level of detail that just can’t be matched. With these tiles and today’s parts, I bet a really exquisite mini X-wing could be made. Cheese slopes, ski poles, these tiles, it almost makes me want to try it.