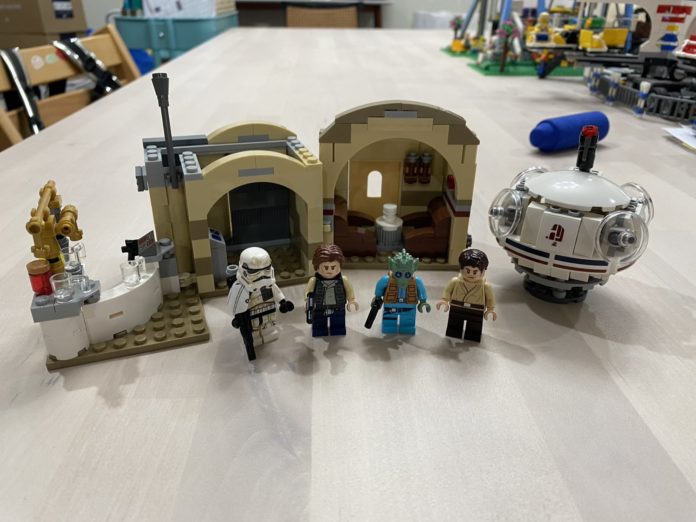 Let’s just get this out of the way: 75205 Mos Eisley Cantina is a giant piece of crap.

I was cleaning out some boxes in storage and ran across this set. I thought “how serendipitous”. I could do a quick review 75205 Mos Eisley Cantina while we all have the UCS one on the brain. But holy smokes does this thing suck. It’s a series of two-and-a-half vignettes, a vehicle, and some figs jammed together in a box that looks nothing like the Cantina we all know and love.

Two and a Half Vignettes 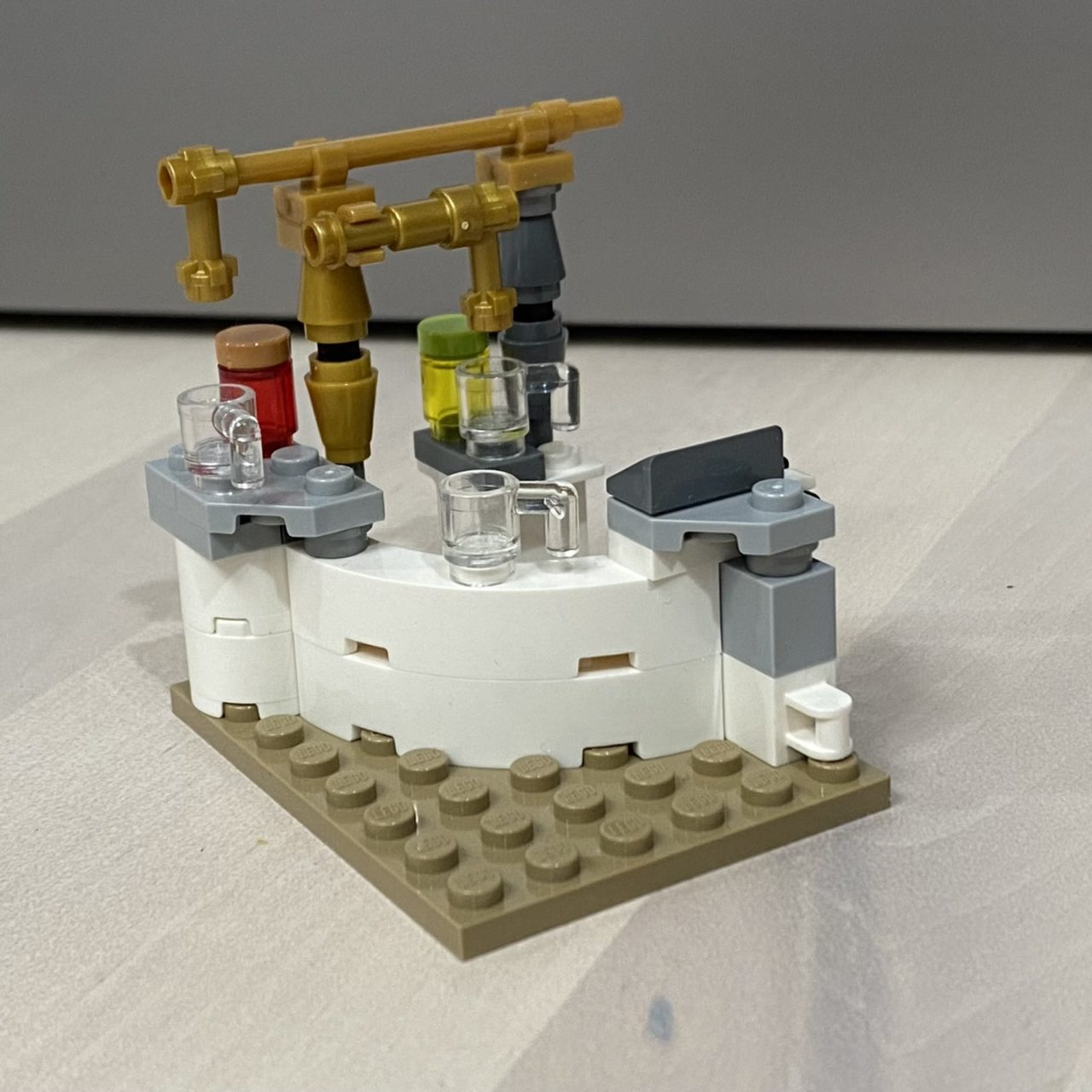 Vignette #1 is the “half” of the lead, consisting of just of a quarter of the bar. In some drinking holes, this may constitute as half a bar, but we all know what the real one looks like right? Like this:

So yeah, a quarter of a bar. A rounded corner at that. I can almost see the designer attempting to add as much detail as possible to the quarter bar. The end product though barely has any room for the bartender. You can’t really properly stand him up and attach his feet to any of the studs without some effort so you’ll most likely have him just lean against the bar or a cup or something. 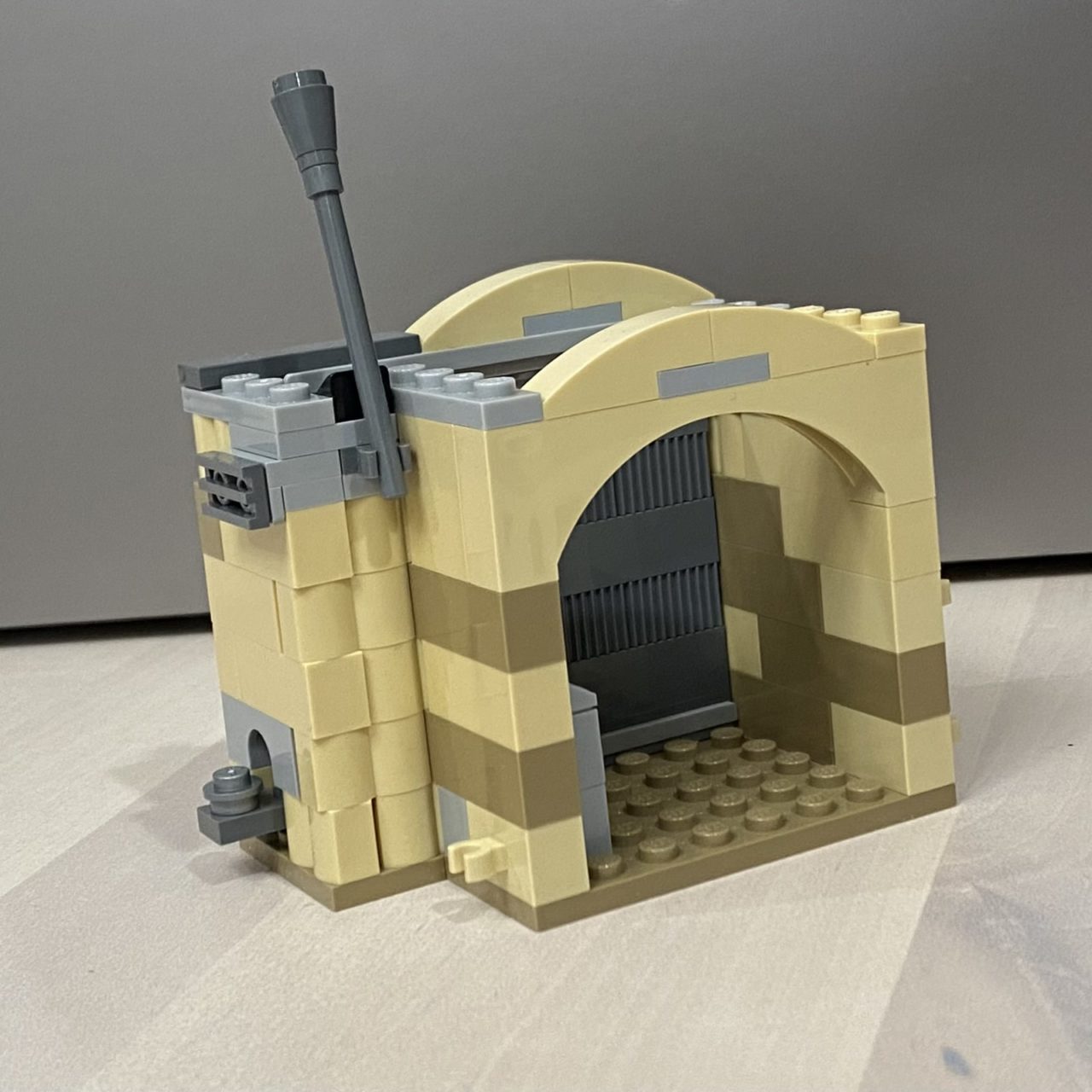 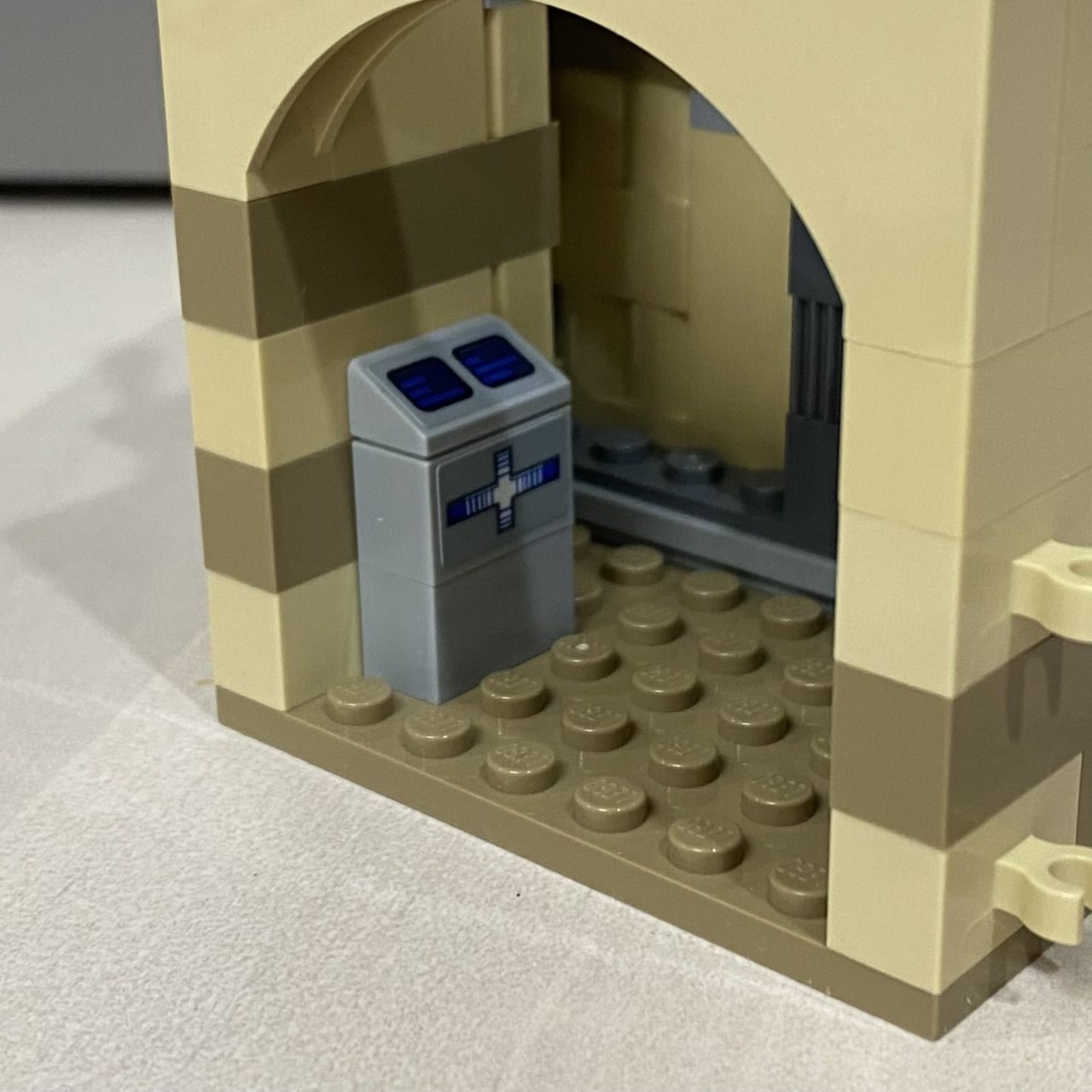 There’s some stickered elements for the droid sensor on the inside for the droids that aren’t included in the set. 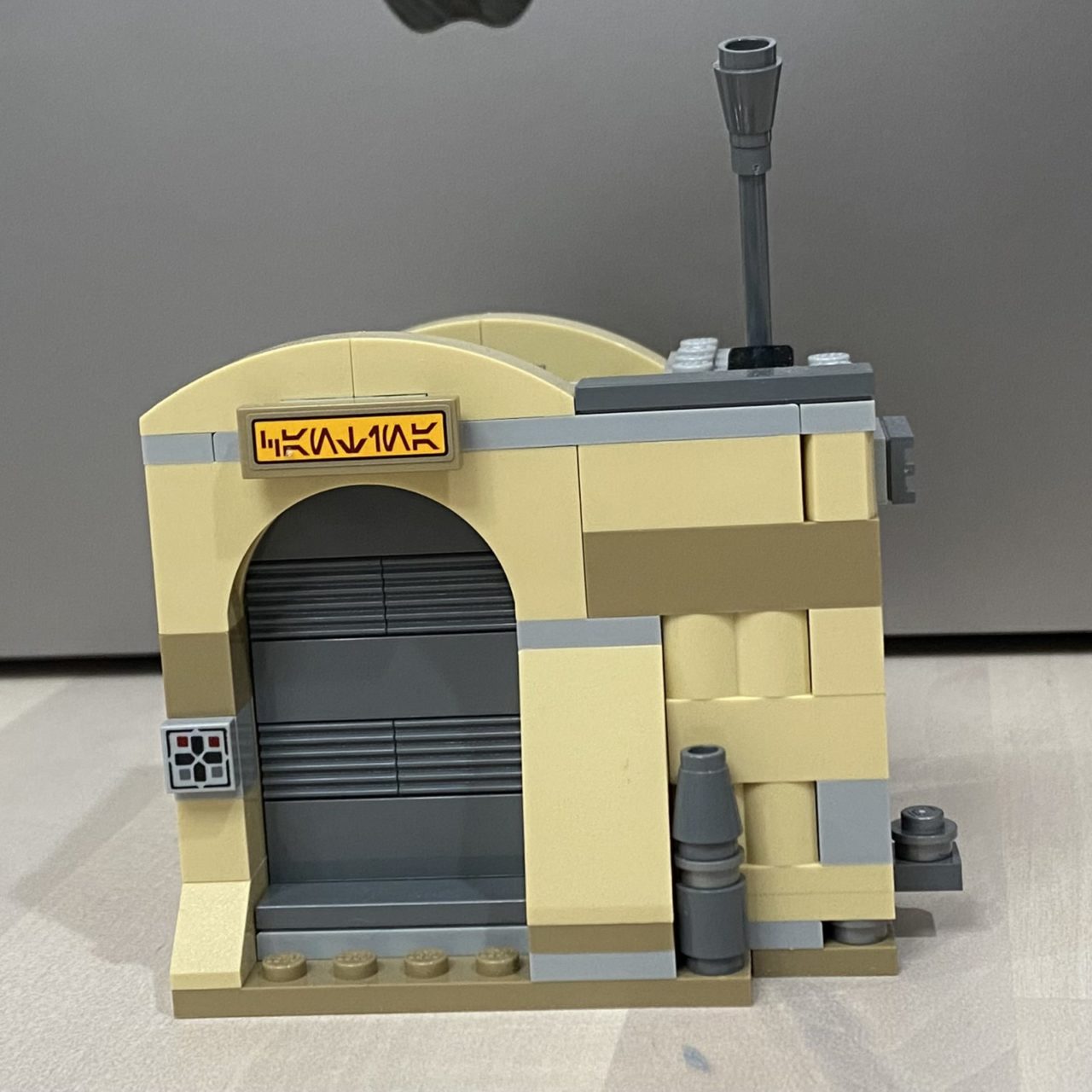 The outside features sticker that reads “Cantina” in aurabesh is placed above the door.

The sliding door is kind of neat but that’s about as thrilling as this set gets. Without either of the droids, it’s slightly more difficult to re-enact the “we don’t serve their kind here” scene from A New Hope. What does LEGO expect us to do? Make things up? User our existing droid minifigs we may or may not have? Or worse, use our imagination???

Vignette #3 is the booth Han and Greedo have their showdown. Each booth seat has an ejector seat mechanism by way of a dial built on each side. You’re supposed to turn the dial and make the seat flip to emulate the character getting headshotted.

There’s no argument that Han shot first, and even if you want to accept the edited version of the scene and claim Greedo shot first, Greedo was the one who died. It makes sense having his seat flip him over, but it makes no sense why Han’s seat would have the same mechanism. This isn’t a fun-ride feature that every booth in the Cantina would have. And unlike LEGO, I know which side of the booth Han sits on. 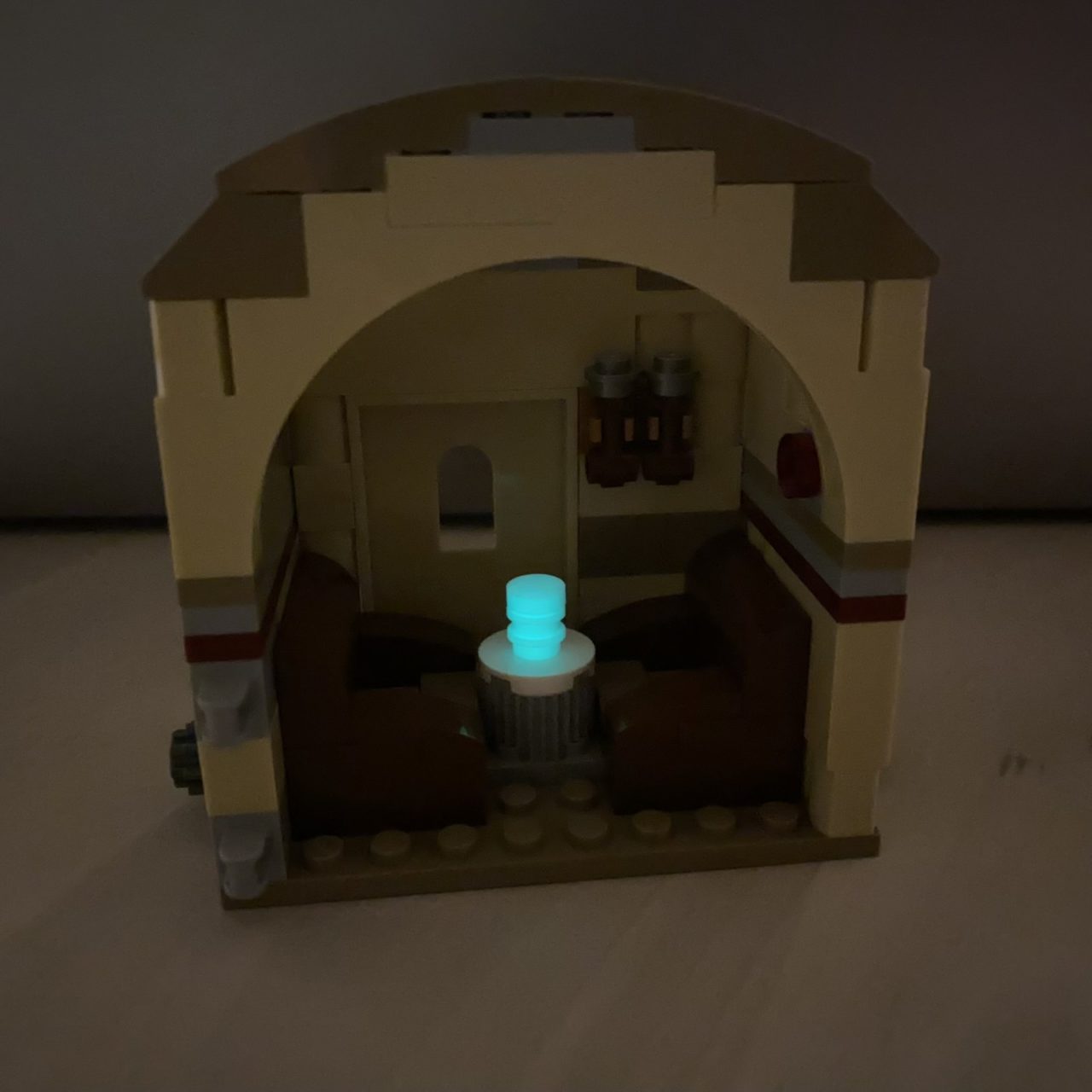 The other notable thing about this vignette is that the centerpiece of the booth table is made up of glow-in-the-dark elements to simulate the tabletop lamp. It’s a nice touch if you’re going to be playing with your LEGO in the dark but I think a transparent or white 1×1 round brick would have been fine. The glow in the dark elements doesn’t really add any value to the set. 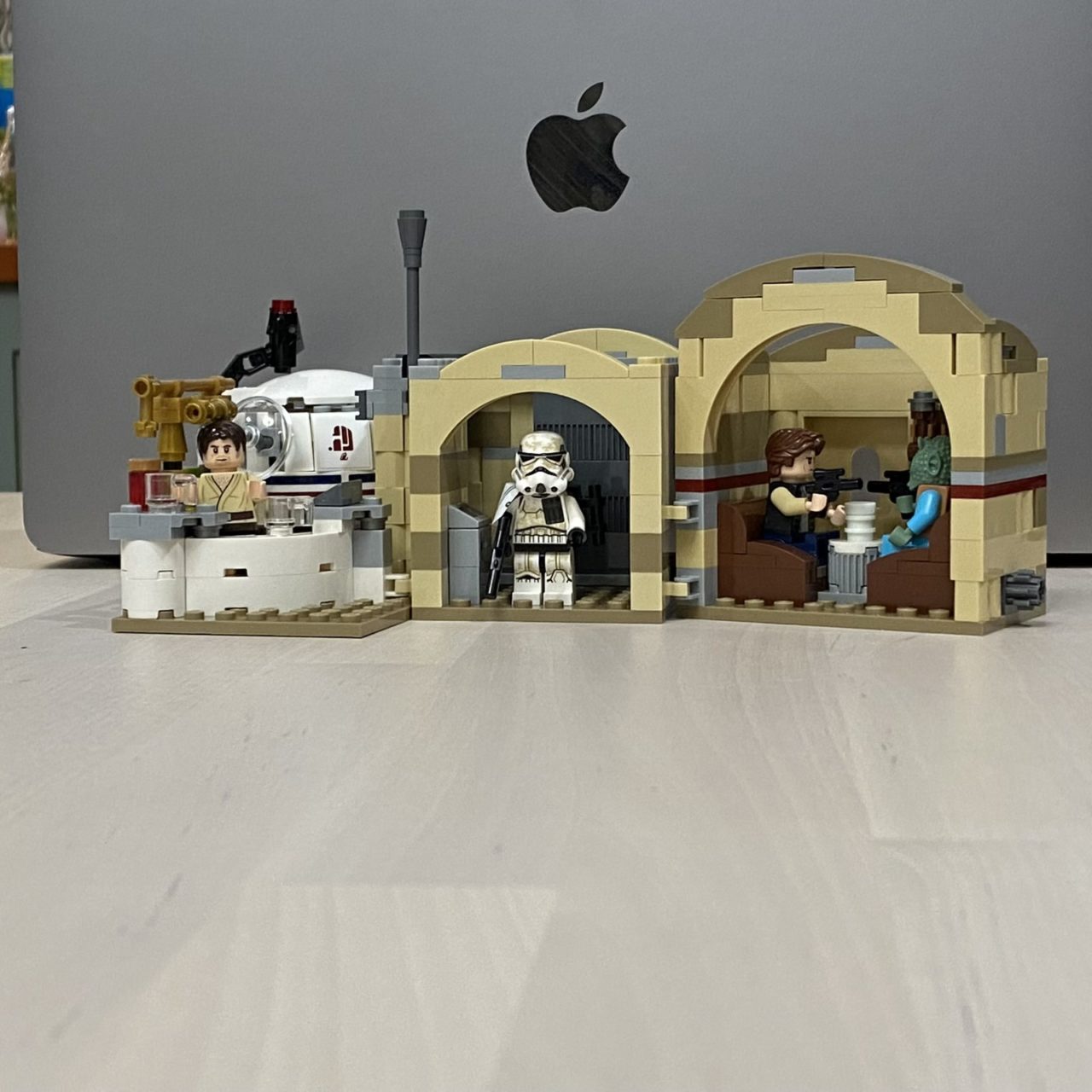 And this is how you put all the scenes together. 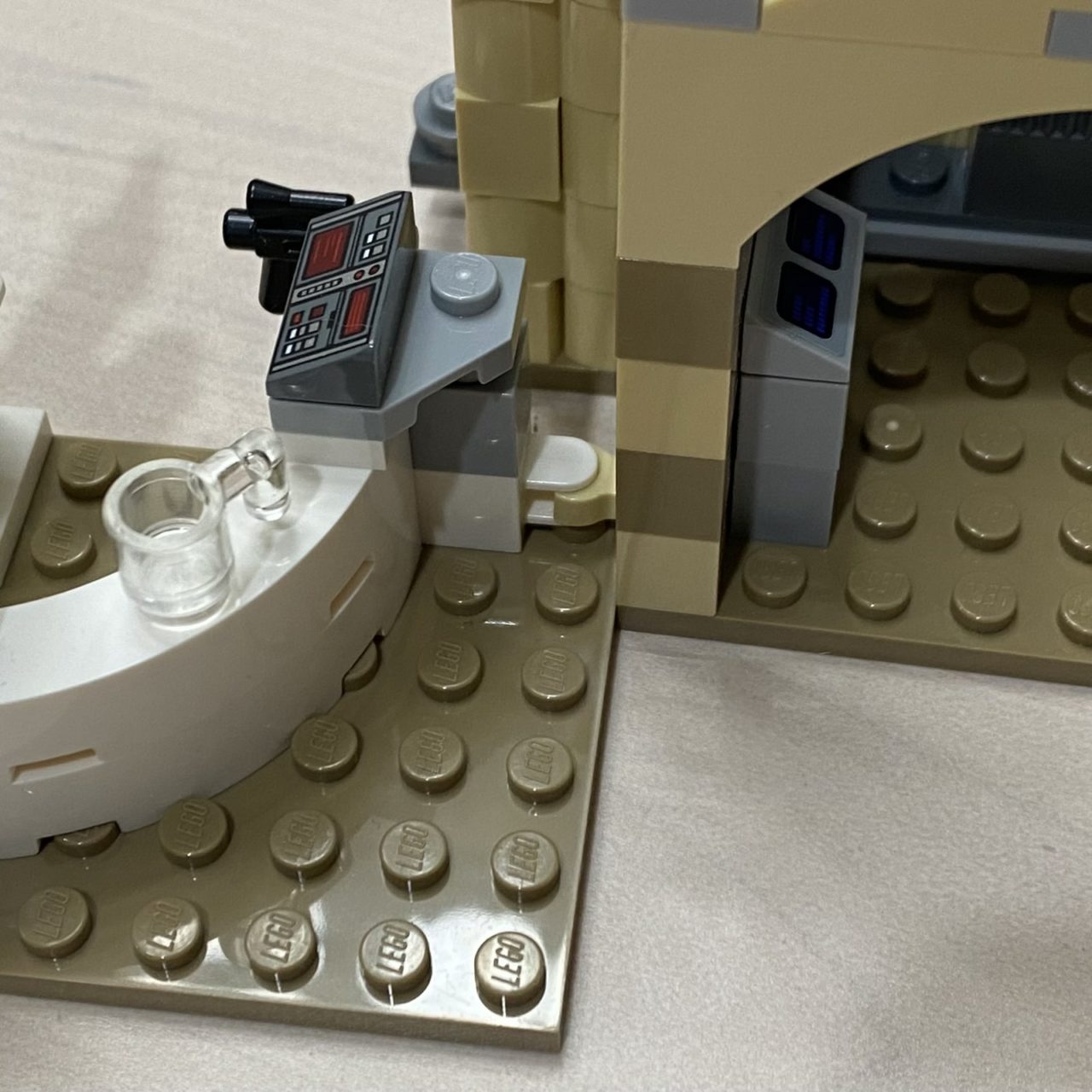 The bar attaches to the door by a single clip and can’t be angled in any other way. 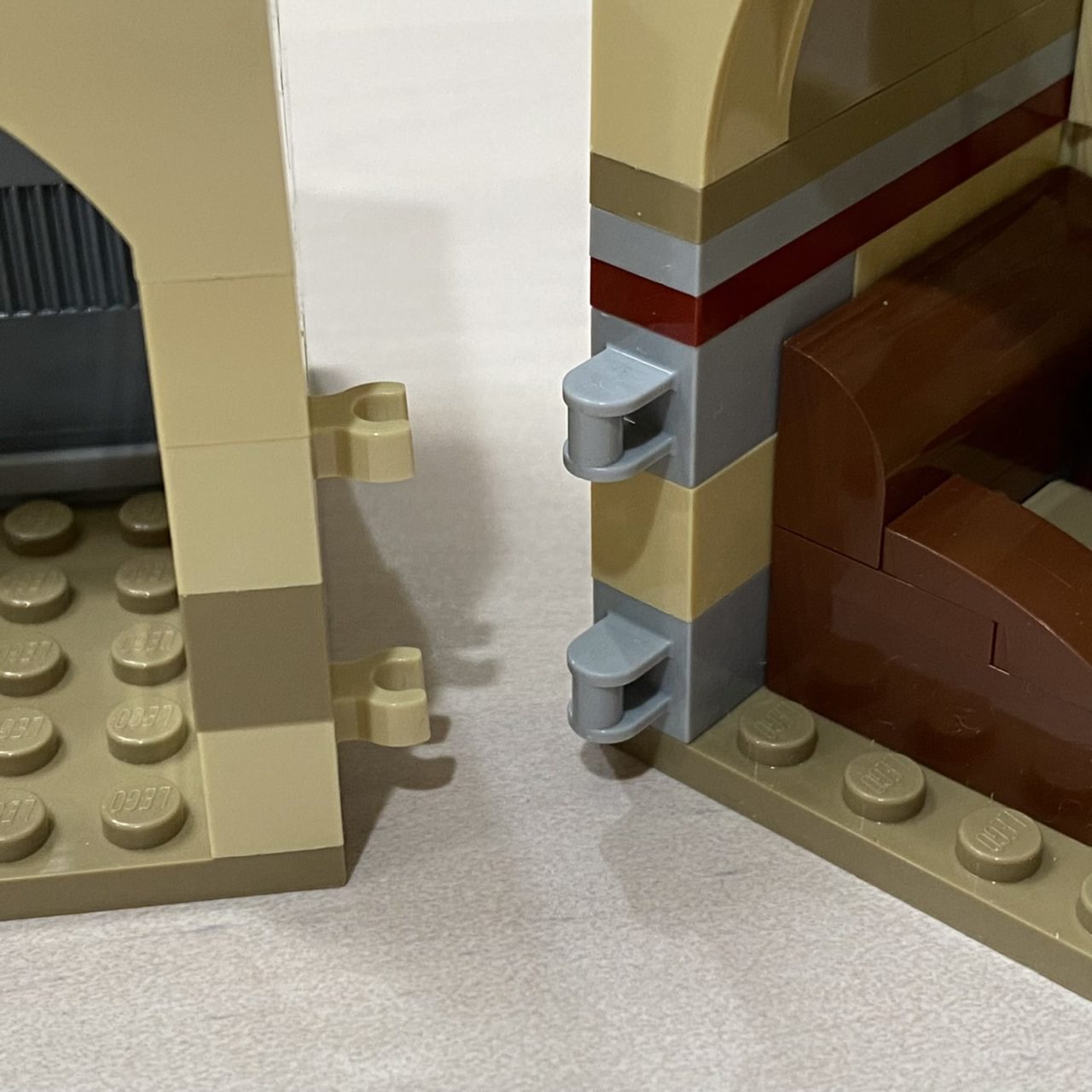 The door then attaches to the booth by two clips. You can change the angle in which those attach but it makes the whole thing kind of awkward if you want to use Han’s seat dial. When it’s all put together you get this structure that looks nothing like the famous Cantina bar scene whether you’re looking at it from the outside or inside. Had the bar been put on the other side next to the booth, it might have made a bit more sense? I don’t know. There doesn’t seem to be any way to attach the three vignettes together and have it look good. 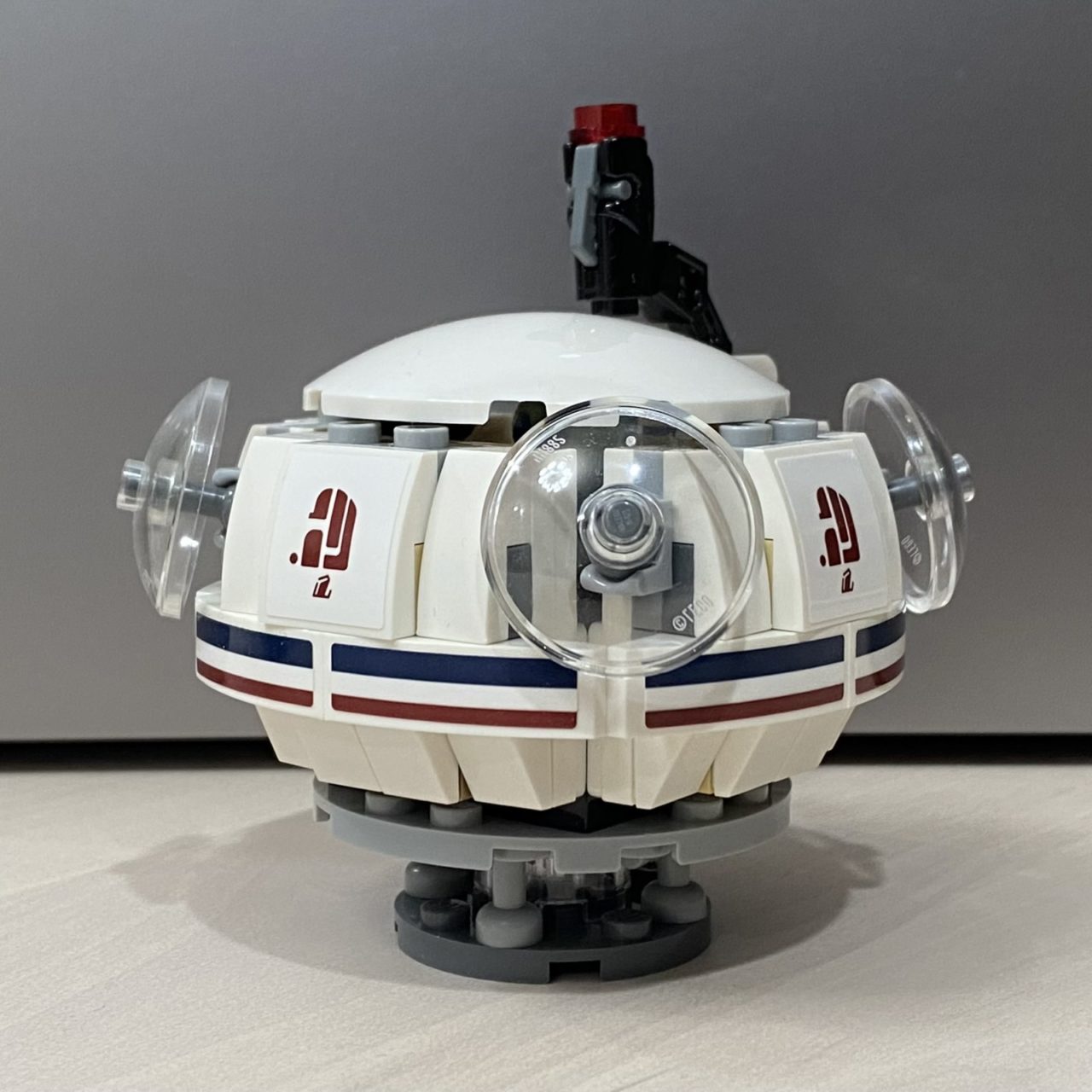 The real star of the set is Ubrikkian speeder. It recreates the rounded bulb look quite nicely even though the corner windows are blacked out in the source material. They did correct this in the UCS version but that’s hardly a reason to get that set. 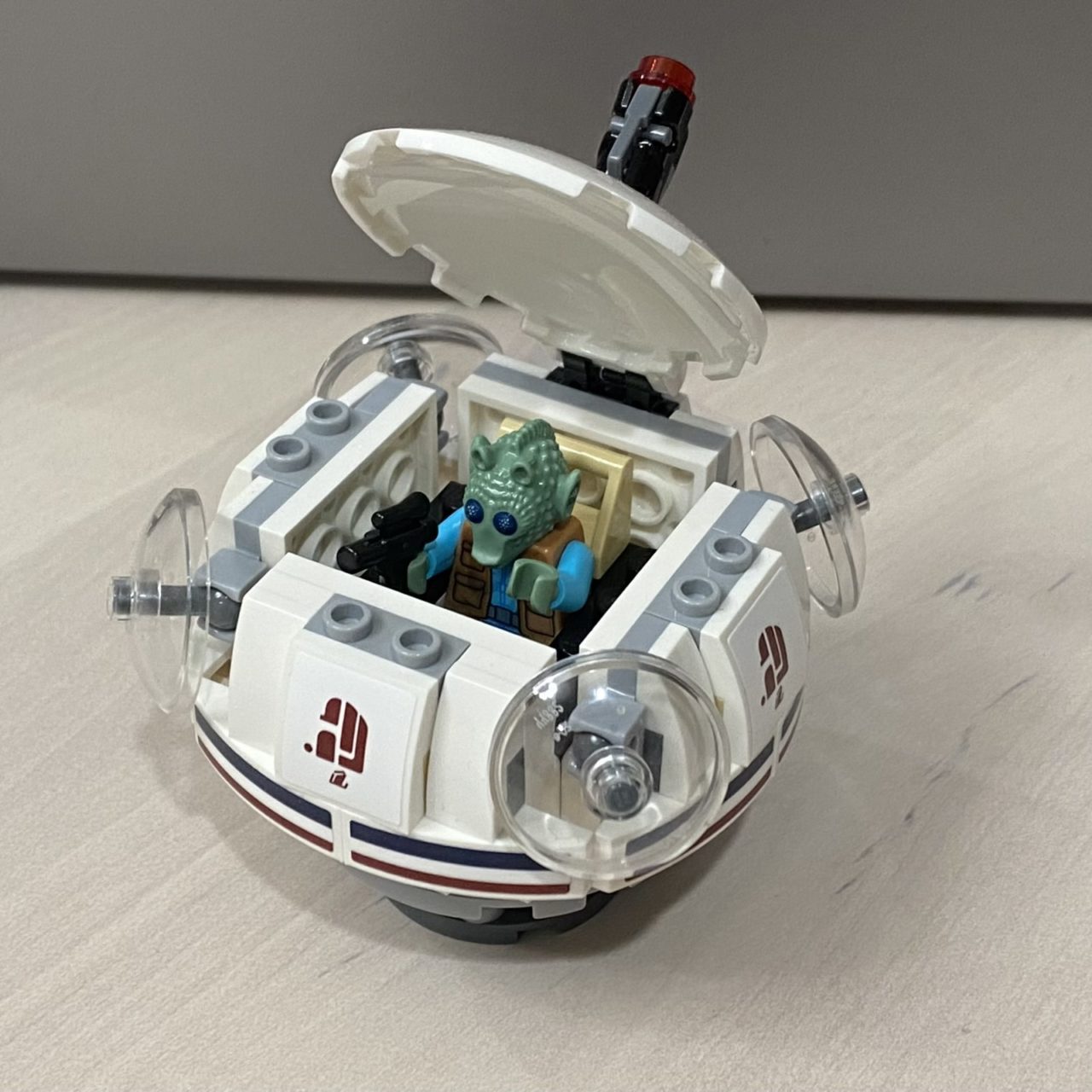 There’s space inside the interior for a figure to site and still hang on to his sidearm. Stickers make up all of the graphical elements and add some nice details. This is really the best part of the set and the only thing that’s really new along with Wuher.

The minifig selection is where this set really shines as 3 out of the 4 are unique to this set, with the 4th, Han Solo, only previously available in the big $400 Death Star set. But don’t get me wrong, even they are not enough to elevate this bad set.

The minifig selection is pretty decent. This is the first appearance of Wuher and he comes with a double sided-head.

The Sandtrooper is dirty and come with a white pauldron, a weapon and a fancy backpack.

Han and Greedo are included. Nothing really noteworthy enough to mention about Han other than I think his hair element is all wrong. Seems way more fluffier and unkempt than it actually was from that scene. Oh, and he’s suffering from the “too many lines on his face” syndrome that seemed to plague minifigs released around this time.

It’s been awhile since I’ve handled a Greedo minifig. I must say that the printing on the eyes is a really nice touch. He’s not overly detailed and looks just right.

What This Set Could Have Been

A long time ago, LEGO used to sell really cheap sets that had a couple of minifigures in each one that recreated a particular scene. Y’all remember these?

75205 Mos Eisley Cantina should have been broken up and sold that same way. One set could have been a booth with Han and Greedo. Another could have been the door vignette with R2-D2 and C-3PO. Another could have included the Sandtrooper and Wuher with the bar or the Ubrikkian speeder, or both even. 75205 Mos Eisley Cantina retailed for $39.99. If it was broken down that way, I can imagine each little set being sold for for $10 or even $12 and they would have been more appealing (and more affordable) than this. Each set would have encapsulated a single scene or vignette and not be forcefully jammed together into something that looks nothing like what it’s supposed to be. The booth is a booth, the door is the door, the bar is the bar, and the speeder is the speeder. Put them together, they don’t magically turn into the Cantina. But it seems that LEGO would rather create bigger sets for no discernible reason than to sell them to you for as much money as possible. For a modular building toy, there isn’t much in the way of modularity when it comes to set designs. 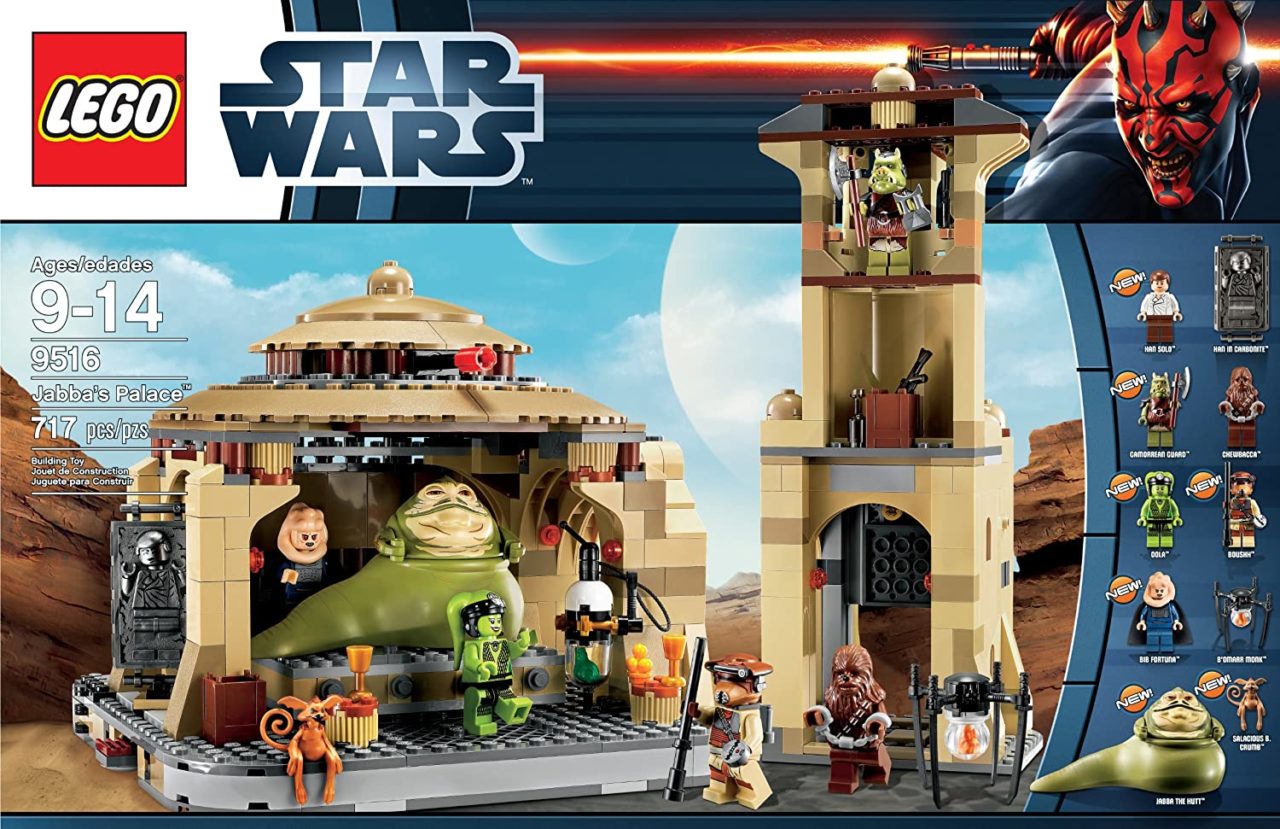 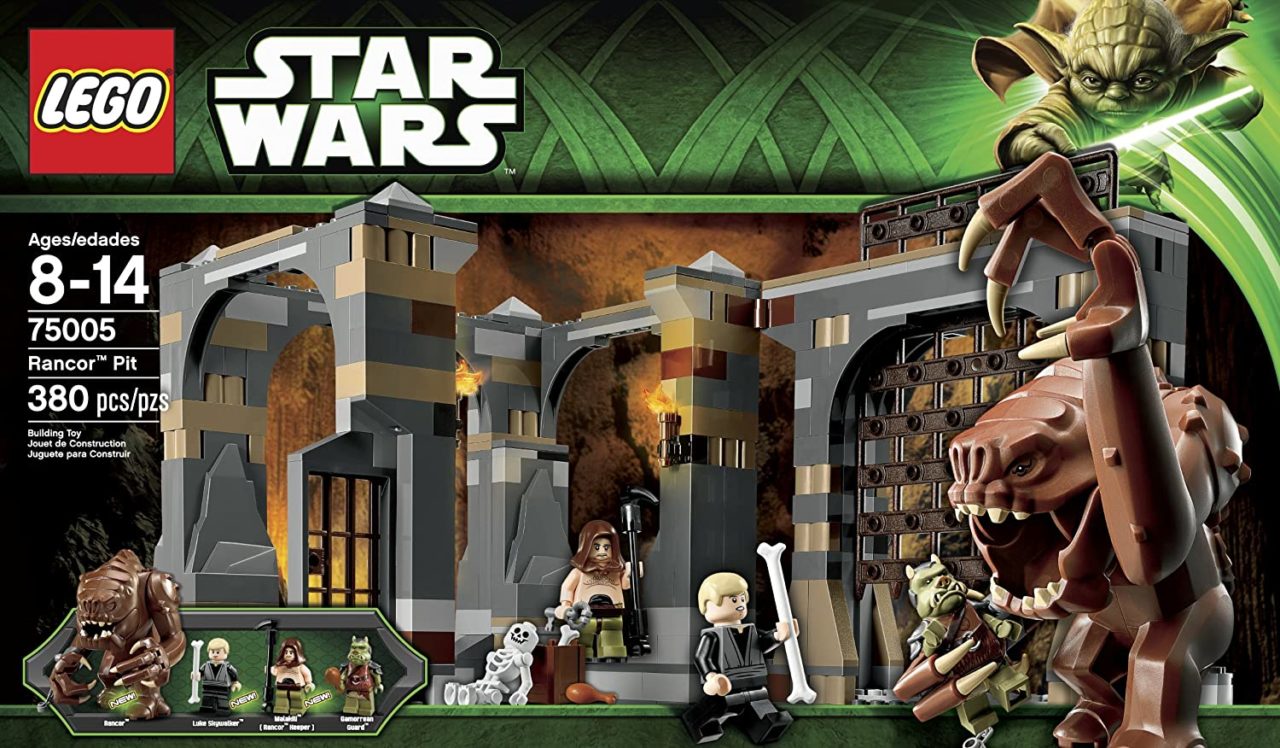 Remember Jabba’s Palace and Rancor pit sets? These were the penultimate LEGO Star Wars modular sets released a year apart. You can stack them to make a complete Jabba’s Palace. This was a great design and amongst the fans and collectors I talked to, very well liked. Why can’t LEGO do more of this? Or at least design Cantina Sets with the idea that they can be modularly attached to one other. All the sets that bear the Cantina name were never built that way.

What This Set Ended Up Being 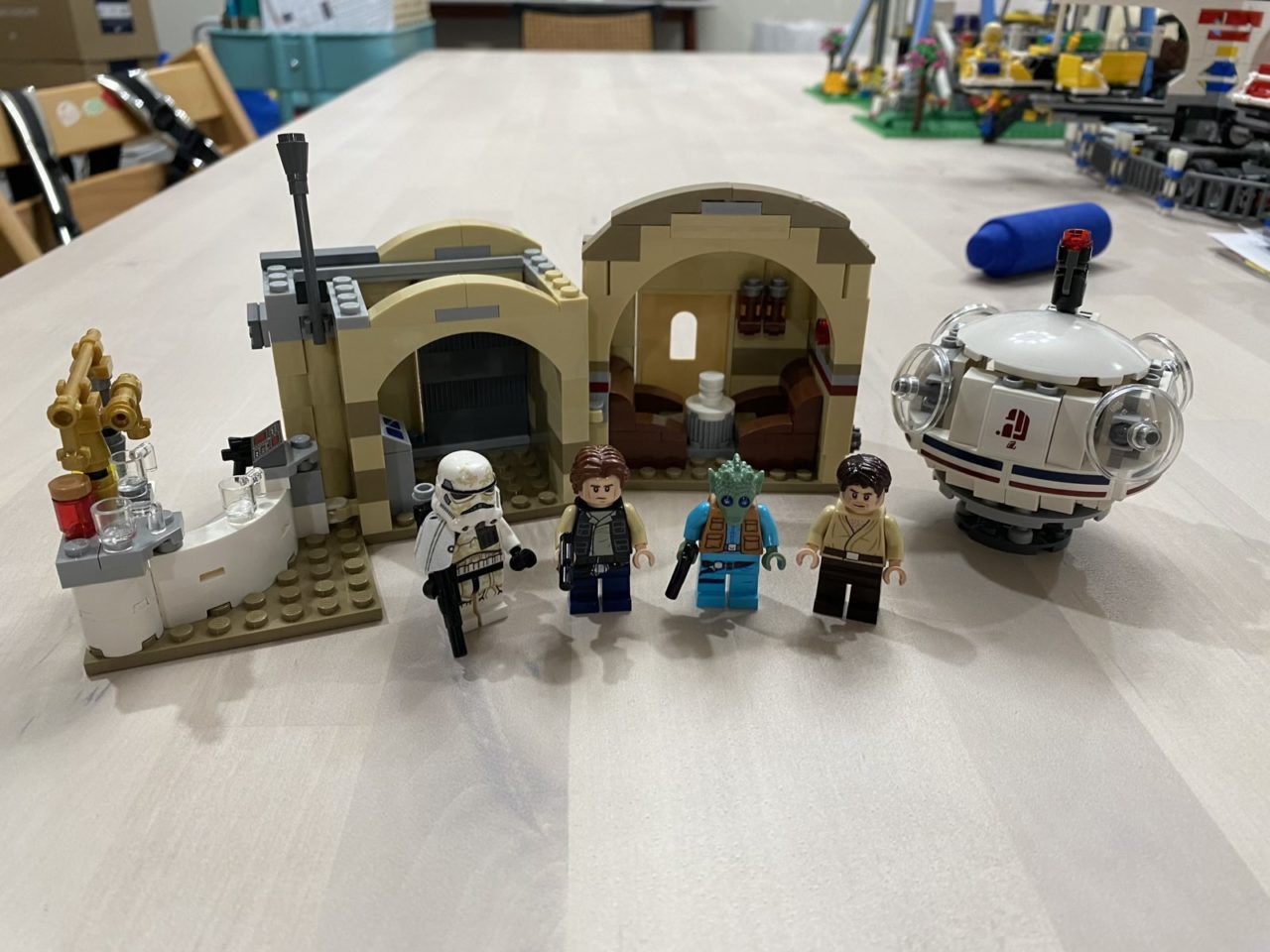 This set’s strongest point is the selection of minifigs. 3 out of 4 are unique to this set and one was only available in an expensive set before. And that’s how LEGO gets you to spend money on them. There is more of an effort to create new bait (minifigs) than there is to make the actual set something worth buying. Sadly, that is the only justification to buy the set. It would be best to get them off of bricklink individually. Or just not at all because not having these versions of these figs isn’t going to change anyone’s life.

Aside from the minifigure collecting standpoint, I really shouldn’t be surprised that this set is as bad as it is. All of its flaws are right there on the outside of the box for you to look at. Honestly, if it wasn’t for the Mos Eisley name and the booth with Han and Greedo, I doubt anyone would look at this and think, “Oh yeah, this is totally Star Wars and totally worth spending my money on.” There’s no hidden magic; the whole does not end up being greater than the sum of its parts. It ended up being less than the sum. It’s just a steaming pile of crap. If you spent money on this when it was available at retail, I’m sorry.

A score 1 out of 5 stars shouldn’t be a surprise.

Will it fit in a Ziploc bag?

A gallon bag, for sure, or better yet, a trash bag.

All of the Pictures for 75205 Mos Eisley Cantina

Gonna try something different. I’m going to raffle away my review copies. Each raffle entry is $1.00 USD. You can enter as many times as you wish subject to standard giveaway rules. Send your buck to paypal@fbtb.net, include your mailing address, and put “75205 Mos Eisley Cantina raffle” in the message . Raffle closes on 11:59pm Pacific Time October 5th, 2020.