Remember those sets leaking all over Instagram? Well, it turns out they were holding them back for today’s Triple Force Friday show. The Triple Force Friday show was a livestream event put on by Star Wars to show you all of the upcoming Star Wars merch you can buy on Force Friday, October 4th (you know, i just realized, with Toys’R’Us no longer in business, will another retailer step up and do a midnight release?). Not sure exactly what the “Triple” descriptor signifies exactly. If looking at the segmentation of the LEGO announcement, the ‘triple’ might mean that the merch will be based on three separate Star Wars properties: The Mandalorian, Rise of the Skywalker, and …. Classic Star Wars. Kind of a cheat if you ask me if one of those items is bucket catch-all category.

My initial impressions still stand, even with the higher res pictures. The AT-ST Raider looks like the same AT-ST from 75153 just done up with stickers and a different color pallet. The A-wing is the best out of the bunch and might be my single purchase from this wave. And that Yoda is still ugly, maybe uglier now that we can see it more clearly. 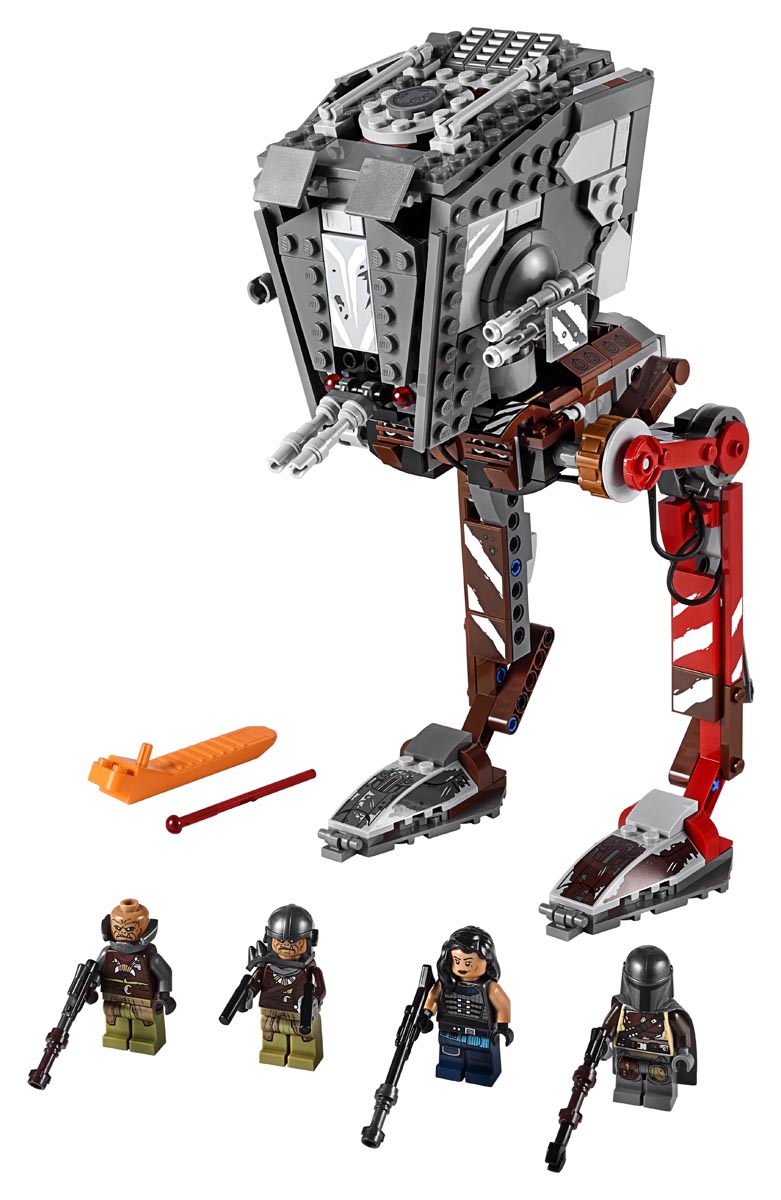 Recreate epic Star Wars adventures from The Mandalorian!
Stride into action with the awesome AT-ST Raider from the Star WarsTM TV series, The Mandalorian! This cool walker has everything youâ€™d expect, including posable legs and a turning turret with an opening cockpit and firing shooters. The set also comes with the Mandalorian, Cara Dune and 2 Klatooinian Raiders to get the LEGOÂ® Star Wars action going straight away! Are you ready to play, young Mandalorian?

From Rise of the Skywalker 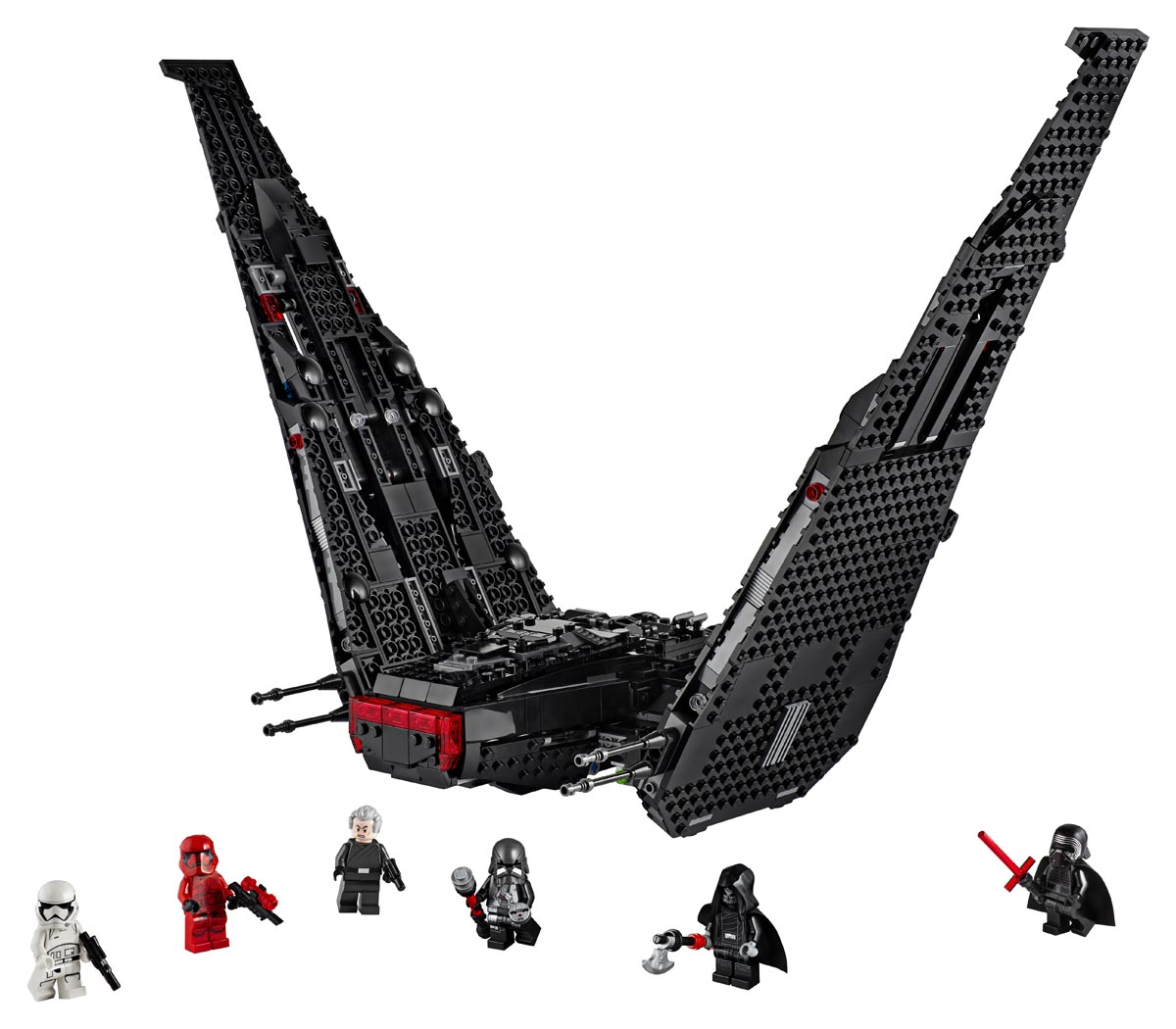 Travel the galaxy with Kylo Renâ€™s personal shuttle. It has everything the Supreme Leader could ever want, including folding wings and spring-loaded shooters for scaring off those pesky Resistance fighters! Thereâ€™s also space in the cockpit for his fearsome crew, the Knights of Ren. This awesome set also comes with General Pryde, a Sith Trooper and a First Order Stormtrooper, so you can start battling right away! 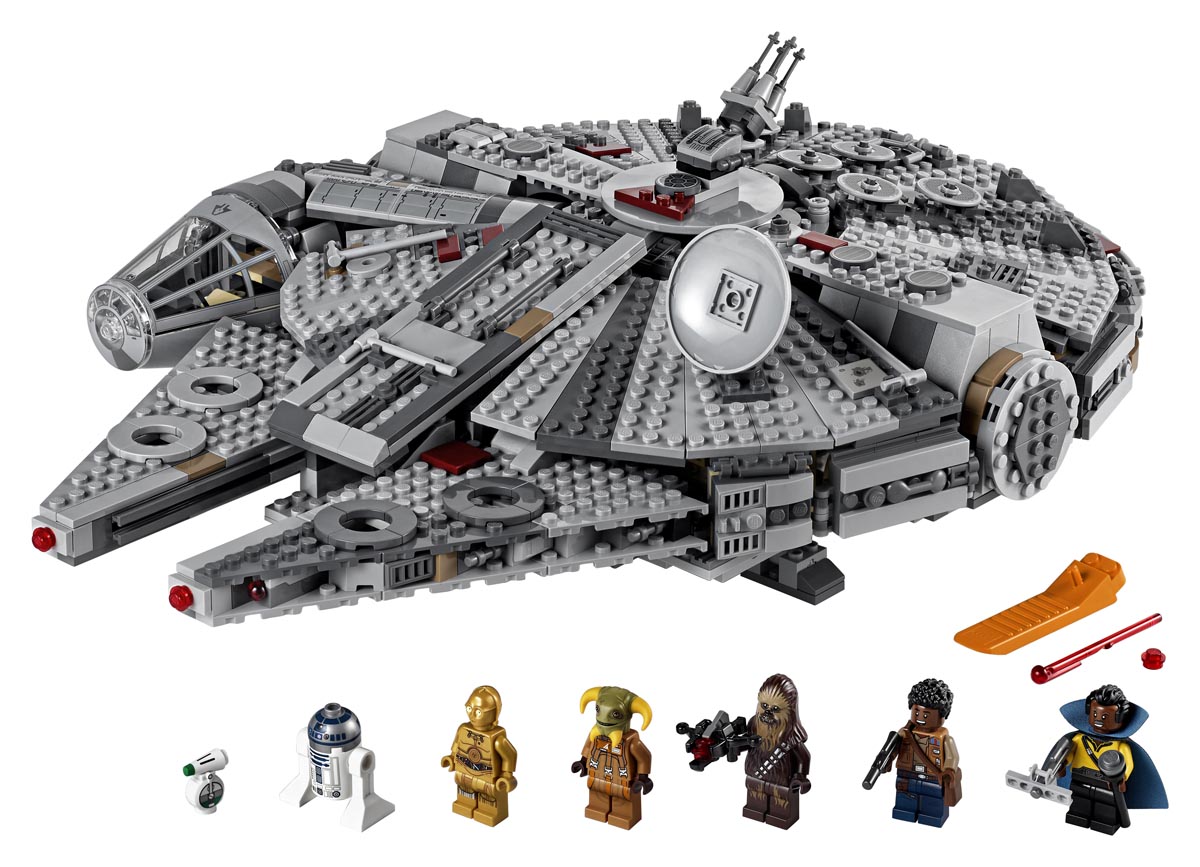 Own the Millennium Falcon from Star Wars: The Rise of Skywalker!

Join Finn, Chewbacca, Lando Calrissian, Boolio, C-3PO, R2-D2 and D-O, as they travel the galaxy aboard the legendary Millennium Falcon. Like the version from Star Wars: The Rise of Skywalker, this one might have seen better days… but it can still do the Kessel Run in 12 parsecs… probably. So, raise the ramp, take the controls and get ready to head out on a LEGOÂ® Star WarsTM voyage of adventure! 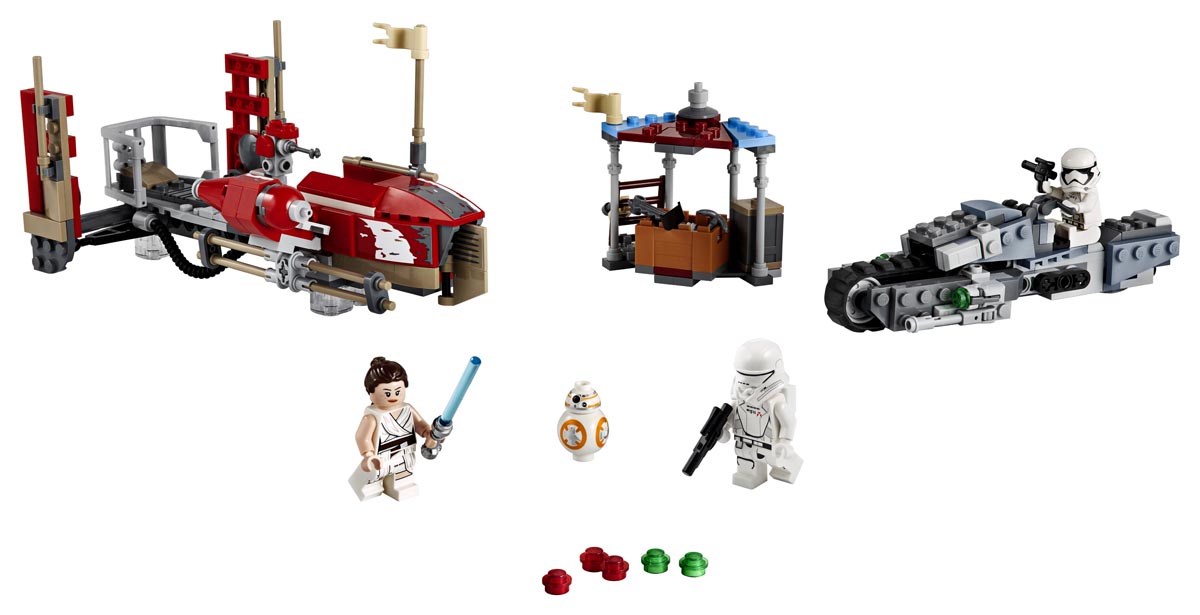 Get the action going with 2 exciting LEGOÂ® Star WarsTM vehicles!

Race with Rey and BB-8 across distant planets on their transport speeder. Just like the one in Star Wars: The Rise of Skywalker, this speeder looks like it hovers, too! But look out, the First Order is in hot pursuit on their treadspeeder â€“ and a Jet Trooper is swooping in from above. Time to grab your Lightsaber and help Rey teach those evil troopers a lesson they’ll never forget! 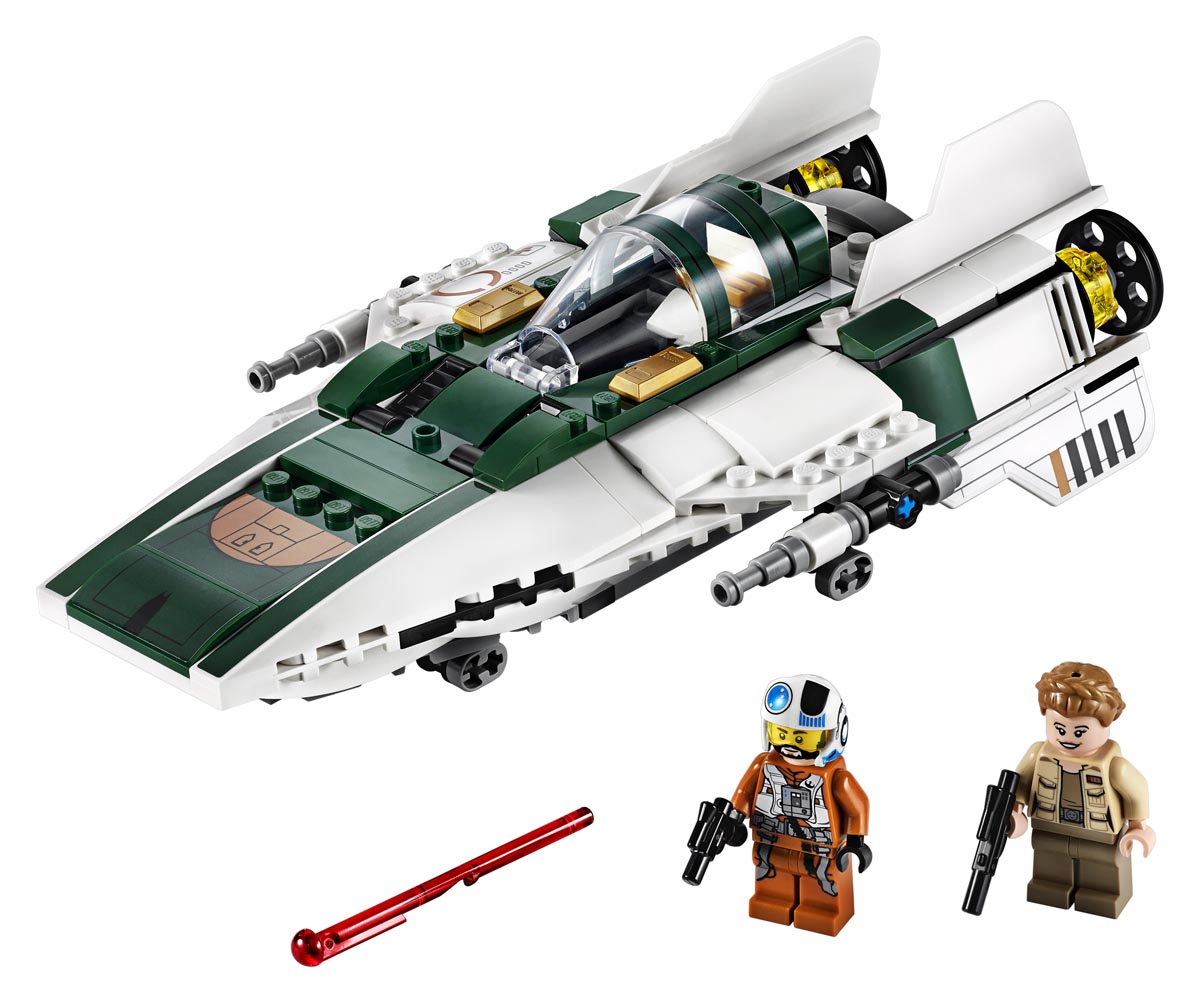 Add an iconic A-wing to any Star WarsTM collection!

Fly into Star Wars: The Rise of Skywalker action with the awesome Resistance A-Wing Starfighter! Itâ€™s got cool details, like spring-loaded shooters and an opening cockpit to sit Snap Wexley at the controls. You also get Lieutenant Connix, so whether you’re planning an attack against the evil First Order or just flying over the surface of a distant planet, this cool LEGOÂ® playset is so much fun! 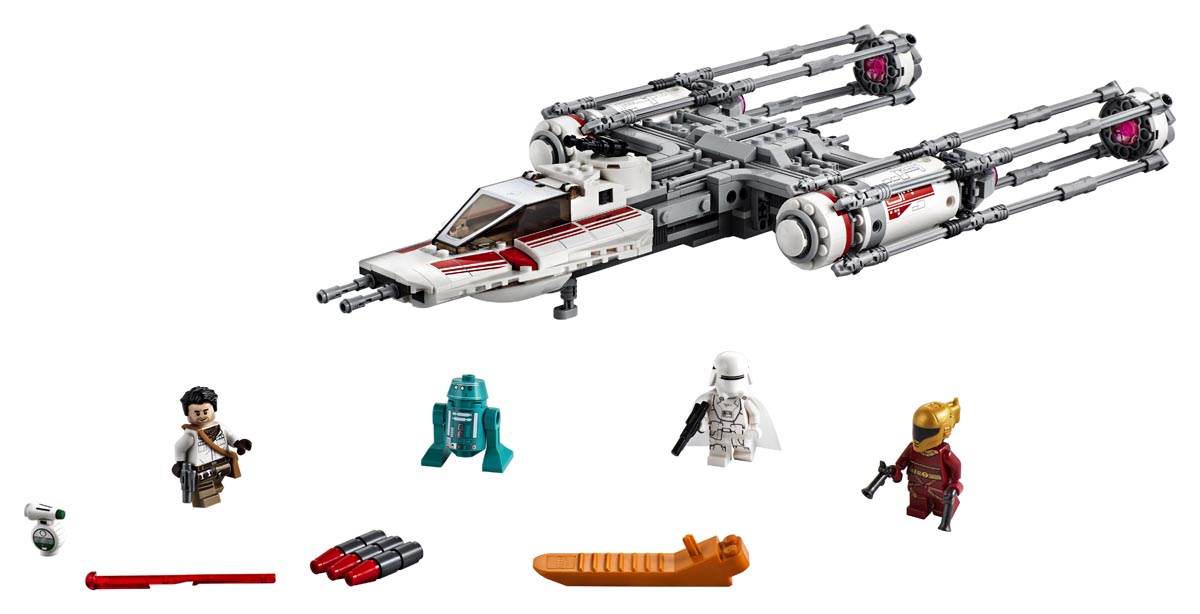 Load up for a bombing run with the Resistance Y-Wing Starfighter from Star Wars: The Rise of Skywalker! Fly in under the radar and pull the trigger to help Zorii Bliss release the bombs. Send the First Order Snowtrooper scrambling for cover and then rescue Poe Dameron, D-O and the Astromech Droid. With this Y-wing, LEGOÂ® Star WarsTM action is never far away! 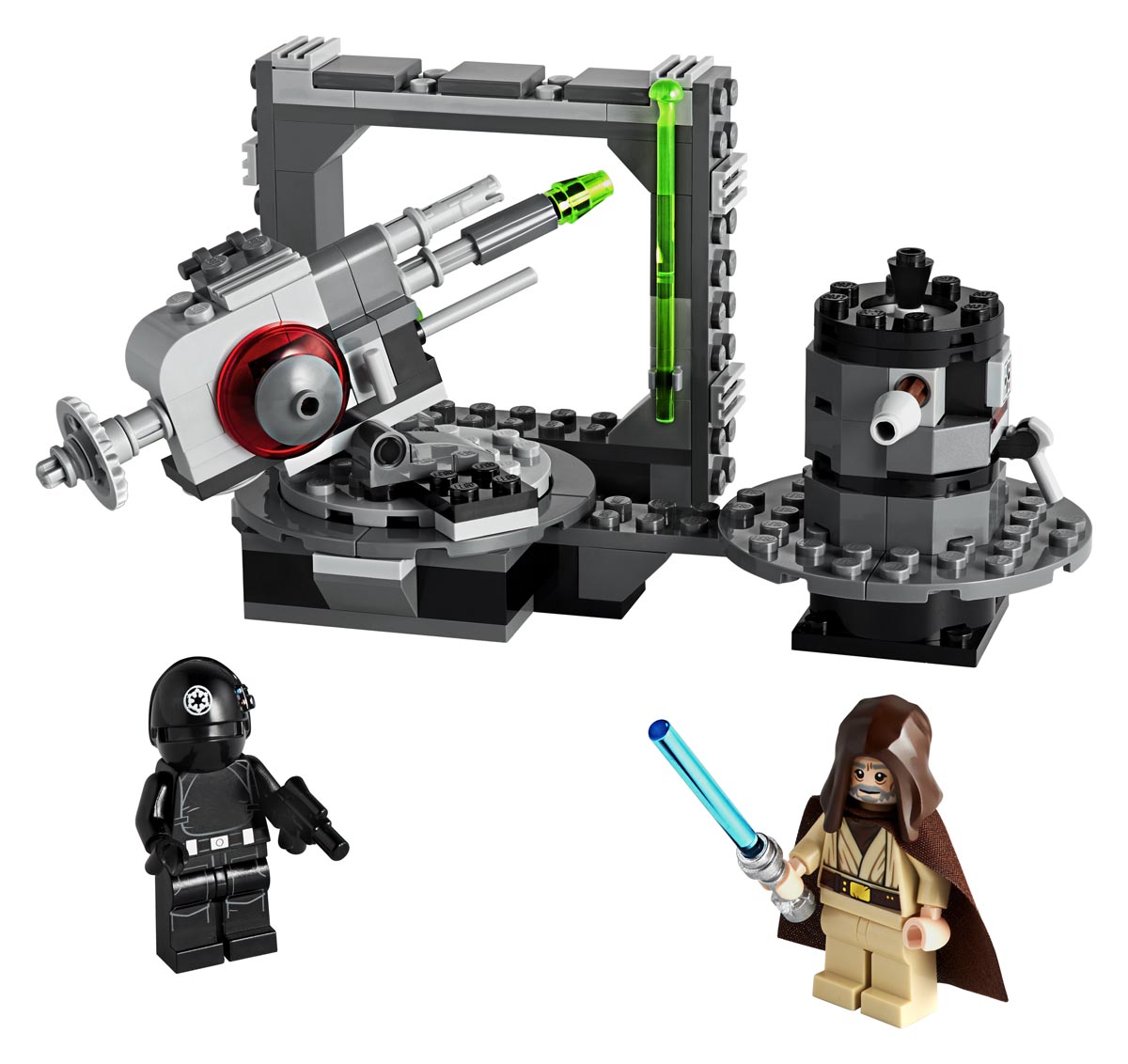 Join Obi-Wan Kenobi on a perilous mission aboard the mighty Death Star. Sneak him past the Death Star Gunner and help him disable the tractor beam before heâ€™s spotted. Then help the Jedi hero defeat the gunner before he can fire the powerful laser cannon. The fate of the LEGOÂ® Star WarsTM galaxy is in your hands with this cool Star Wars: A New Hope scene! 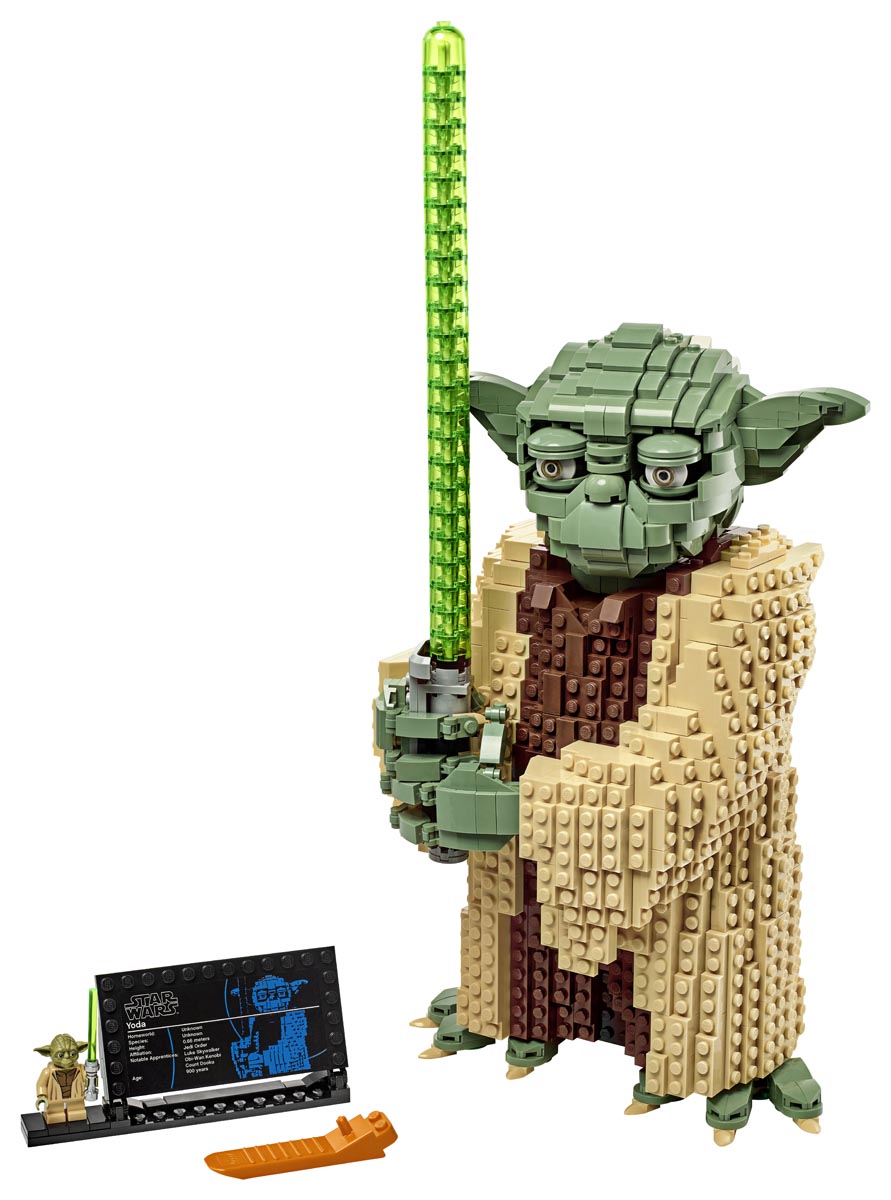 Play out exciting Star WarsTM battles with buildable Jedi Master Yoda! He might be made of LEGOÂ® bricks, but with his powerful Lightsaber this large LEGO Yoda figure is a force to be reckoned with. Move his head, eyebrows, fingers and toes to strike the perfect Jedi Master pose! This set also comes with a display stand and a small Yoda minifigure and Lightsaber.