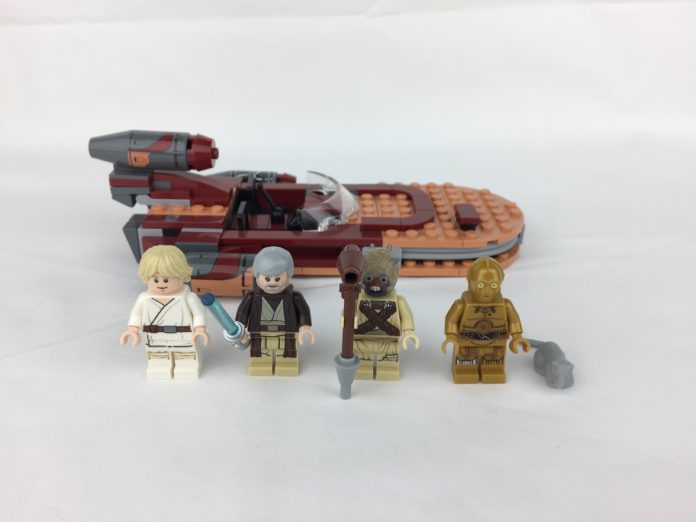 I had a hard time writing this review for 75173 Luke’s Landspeeder. There exists a problem when trying score a set that’s been released before with only a few minor modifications. Do you score it on its individual merits? Or do you take into account the fact that all it is a rehash of a previous set. We’ll call the individual merits approach one and the rehash point of view as approach two. 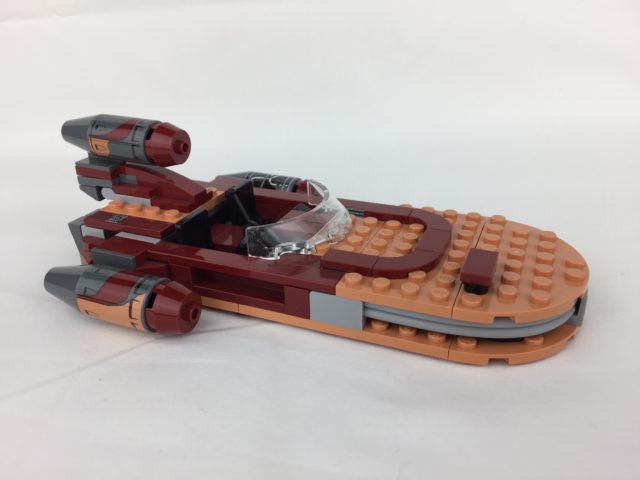 If you take the first approach and just score it on its own merits and completely ignore the pedigree from which it came, it scores rather highly, maybe a full 5 out of 5 stars. 75173 Luke’s Landspeeder is a solid representation of the source material with a great set of minifigs. Aaaaaaand that’s really all there is to it. There aren’t a lot of play features to speak of, and there is just a smattering of unique parts. Does it look like Luke’s Landspeeder? Check. What else is there to say? It doesn’t have any moving parts aside from a storage compartment that may or may not be canon. And uh…. it seats two. 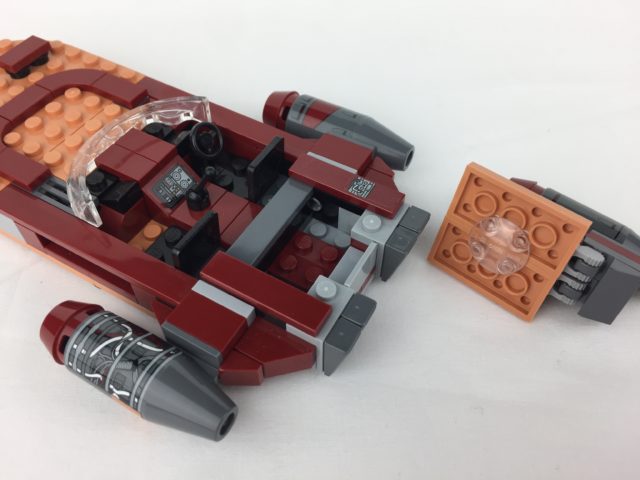 Beyond that, none of the minifigs are unique. Old Ben, Luke, Threepio, and the Tusken Raider have been readily available elsewhere. The Tusken Raider minifig is probably the big draw though; it was only available in one other set before it back in 2015, 75081 T-16 Skyhopper. But with 75198 Tatooine Battle Pack out now, it’s even easier and cheaper to build up a small army of these guys. 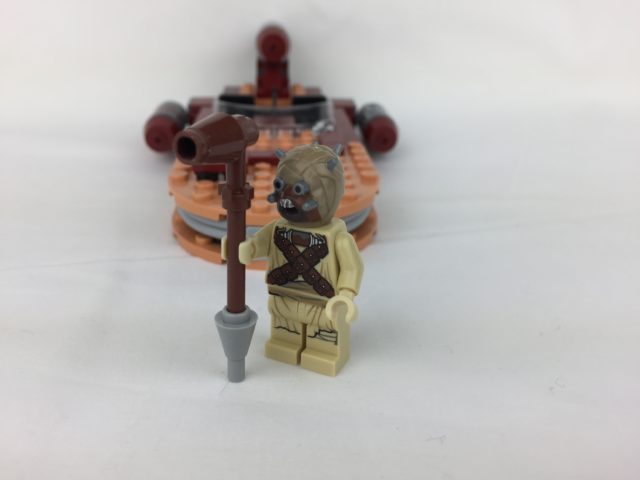 The Rehash Point of View

If you take the second approach and take into account its place in the overall LEGO Star Wars catalog, it scores low, maybe 1 out of 5 stars. You’re not really getting anything all that new. The value for the money just isn’t there. It’s extremely similar to the previous release of the Landspeeder that was included in 2014’s 75052 Mos Eisley Cantina set. None of the minifigs are unique. The sticker sheet is nearly identical to the previous Landspeeder’s sticker sheet, and the three engines are built ever so slightly different. All of the other changes are not really worth mentioning. 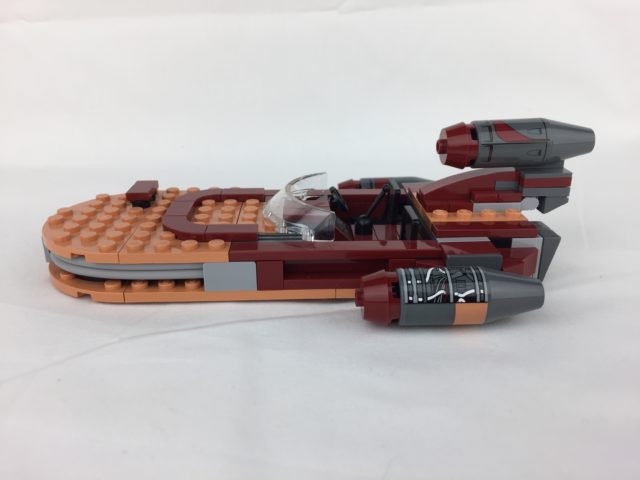 Someone’s who has been in the hobby for more than a couple of years can easily pass this set up and not really miss anything. And for those entering the hobby new, it’s more worth paying aftermarket prices for last year’s 75052 Mose Eisley Cantina set. The mark-up isn’t too crazy (yet) and you get a couple of other small builds to go along with the Landspeeder model and some great minifigures. It’s especially worth picking up now since the newest Mos Eisley Cantina set (75205) with the long-awaited Wuher is out now and supplements 75052 nicely. 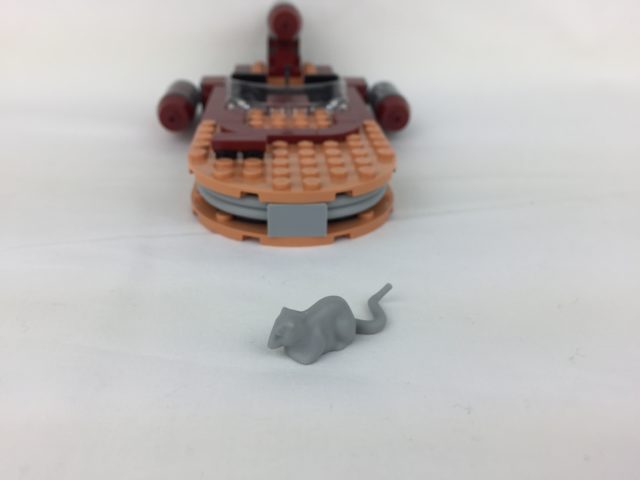 The new Mos Eisley Cantina set does post an interesting question. Looking at this set, 75173 Luke’s Landspeeder, and 75205 Mos Eisley Cantina together and comparing it to 2014’s 75052 Mose Eisley Cantina, you might think that LEGO is just splitting up the latter into separate sets out of pure laziness. Like they had “Hey let’s break up a fairly big set into smaller sets, call them ‘new’, and charge more money for them” kind of a thinking. And you’re probably right, but what if, just what if, 75205 and 75025 were intended to complement each other the way that Jabba’s Palace and Rancor Pit were designed with each other in mind. Like, maybe they took a modular approach to the Cantina so that you can buy both and put them together and just have the Cantina grow? I would LOVE to think that they did this, but having the two Cantina sets released four years apart totally blows holes into that theory. I wouldn’t mind a modular approach: buy a bunch of small unique builds that connect to build something bigger. But they’ve got to be released in the same year for it to make sense. But I digress…

Now, all that being said, reviewing Luke’s Landspeeder isn’t the same problem as the Sandspeeder review I did a while back. I took the second approach with that one, and my main complaint is that the model, after multiple releases using the same cockpit build, is still wrong. 75173 Luke’s Landspeeder has no room for improvement, except for maybe having it actually hover off the ground. They are both rehashes, but the Landspeeder model has reached its evolutionary peak. So I guess to do this review proper, I’d have to take a little from Column A and a little from Column B. Get it if you’ve never picked up a Landspeeder set in your life. And even if that’s the case, I’d still recommend getting last year’s 75052 Mos Eisely Cantina set before this one. And based on that, I think the only logical conclusion is to giveÂ 75173 Luke’s Landspeeder a 1 out 5 stars. It’s not terrible, but really not worth picking up either.

Still want to buy it? It’s a Walmart exclusive so you buy it from there or directly from LEGO Shop@Home.

Yes, yes it will. Heck, it’ll squeeze into a sandwich bag if you don’t mind a bit of disassembly.

All of the Pictures

Send me an email with LANDSPEEDER as your subject line along with your details as outlined in the giveaway rules to giveaways@fbtb.net. Entry period ends at 11:59pm PST January 17th, 2018.