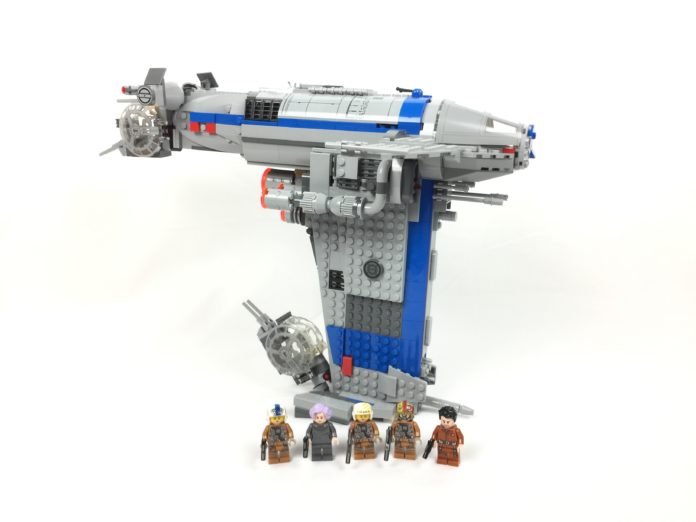 Update: I’m sorry, but I have to downgrade the score. I’m changing it from 3/5 to 2/5. Unfortunately, we don’t believe in half points and this set really falls right in the middle. The reason for the downgrade is the poor selection of minifigs, the price you pay ($110 or so) for 780 pieces, and the difficulty of actually playing with it. It’s a hard purchase to swallow, hence the downgrade.

Just a fair warning, the picture quality may not be that great. I shot these pics and videos using my iPhone since we just started remodeling parts of my house and my usual photography area was dismantled in the process. But for awhile now I wanted to get this review for 75188 Resistance Bomber done so I just used what I could. And now, onto our review.

I’ll just come right out and say it. 75188 Resistance Bomber is not good. Even before I bought it, I knew I was in trouble when I read one of the highlights in the description on its Shop@Home page. It says, and I quote:

That’s a feature? Seriously? I mean, is that some sort of major plot point that he loses his blaster? Is the blaster pistol a special blaster pistol so much so that perhaps it has a name like “Doombringer” or “The Pewster”?

See, that right there, is what you call “scraping the bottom of the barrel.” At least, that’s how I see it. It actually does more harm than good by including that bullet point, ’cause it’s like, is the set that bad that it has to say that?

But you know what? Despite my gut instinct, I bought it anyway. One of the bigger reasons why was because it reminded me a lot of the B-wing. When I first saw it in the trailer, I was like, “Oh hey, that’s a B-wing evolved, but like bigger.” And you can see why I thought that, can’t you? Big central spine, two smaller wings, a hull with maybe a rotating cockpit? Check, check, and no, sorry, but rotating cockpit.

The big central spine is built to house a bombing mechanism. You feed the little balls at the top, gravity does it’s thing, press down on a lever, and the balls fall out of the bottom. It makes the spine huge and since it’s really the only ergonomic way of holding it, it’s a tad unwieldy, especially for smaller hands. Little kids will probably need to use both hands. 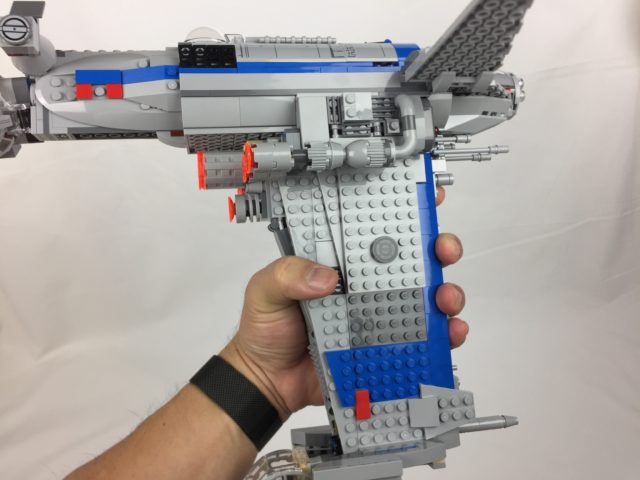 The spine also has two hidden spring-loaded missiles. You launch the missiles by pressing down on a hinged plate. Pretty clever if you ask me. Little kids, or adults with kid-sized hands, may have trouble firing the missiles while swooshing the thing. And I completely forgot about this until I was tearing apart the set, but there is also a little storage area in the spineÂ just above the bomb trigger that holds an extra missile. Clever.

Folding Wings That Should Fold But Shouldn’t 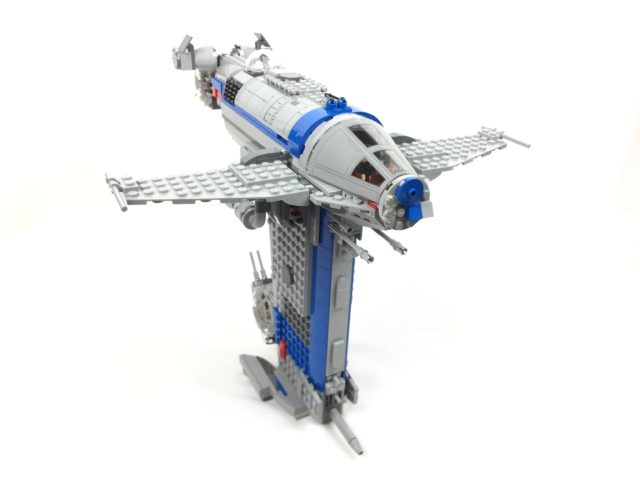 The two smaller wings are small and flimsy and almost feel like an afterthought compared to the engineering and piece count that went into the center spine. They don’t even fold down flat despite looking like they do in the trailer. I had to rewatch it to make sure I was remembering it correctly, but they do lie flat against the bottom wing:

The LEGO model fails to do that. And I’m not entirely sure if that’s on purpose or not. There is a clip that locks it into place at the up position, and I don’t remember seeing any pictures anywhere on the box or instructions manual showing the wings folded down either. You can detach it from the clip, fold them down and have them just sort of lie there at an awkward angle but it just looks bad. I forgot take a picture of the wings in the down position to show you how bad it looks so you’ll just to trust me on that. But here’s a picture of that clip that locks it into the up position:

If There’s One Thing I Learned About The Last Jedi, It’s That Everybody’s Packing Heat. 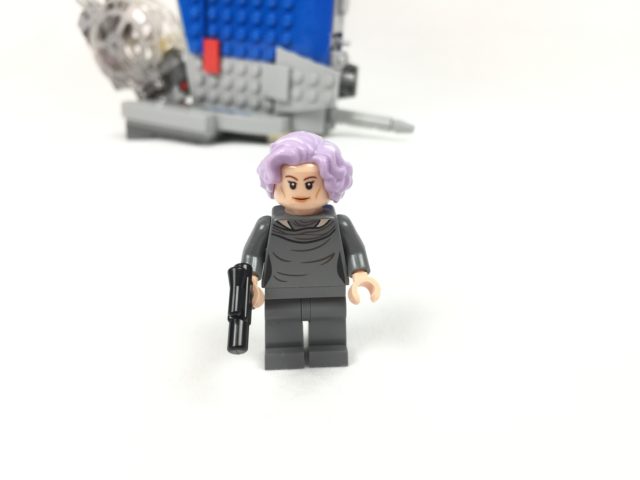 I tend to avoid spoilers and just get what I can out of trailers, TV commercials, etc. But if anything can be gleaned from this one set, it’s that the galaxy is a dangerous place and everyone, including the purple haired lady Vice Admiral Holdo, carries a sidearm. I can maybe understand the pilots/Resistance members carrying blasters, but a Vice Admiral? She’s not exactly dressed to be on the front lines either. They couldn’t give her a cell phone, tablet, or some other accessory? A wand? Or better yet, nothing at all? I mean, if a Vice Admiral is toting a firearm around, then I’m expecting The Last Jedi to be battle scene after battle scene after battle scene.

They all have double-sided heads with varying expressions of disappointment, anger, and mirth. I think some of prints on the pilots are a little too detailed, but that’s just me.

Despite my grumblings about the size, I do like that LEGO made it into a large set. If you look at that screen shot, they are like… at least twice the size of an X-wing. At least, I mean, I’m no mathematician, but it definitely looks bigger. Had they made it smaller, I think everyone would be crying foul.

It can land and stand up on it’s center spine. 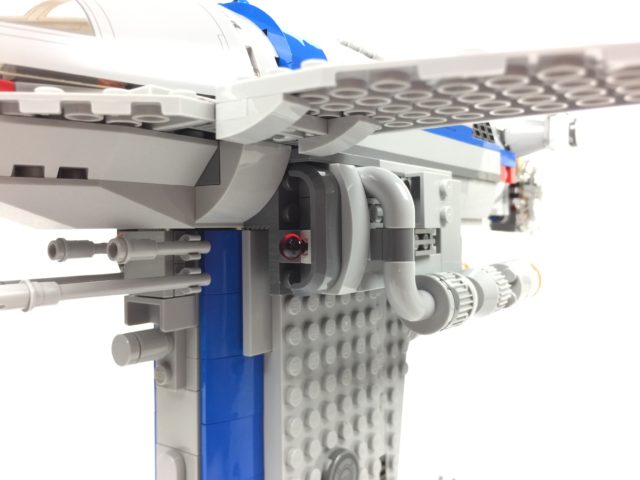 The spring-loaded missiles. The missiles and launching mechanism is hidden behind some greeblies. The trigger to launch the missiles is pretty clever.

What I Found Annoying

The gunner stations. I hated these things. The cockpit may not rotate like a B-wing’s, but the gunner stations do, which makes no sense really. I’m guessing it’s a by product of the construction, not really cannon to the movie.Â  And that one on the bottom? It’s just dumb and stupidly placed. This is by no means a fault on LEGO’s design; I fully blame the source material.

The gunner stations. Yes, it gets mentioned twice because they are too freakin’ small. It’s an exercise in patience to try and get the minifig in and seated completely. Forget about having it hold it’s weapon. You gotta figure out where to put it, which brings me to my next point…

The bottom gunner station. This one especially. Why? because of it’s placement. Based on the screen shot, yes, it does actually stick out of the bottom a bit, but you have to do this move were you shove it out of the way to get the thing to land and rest on something. 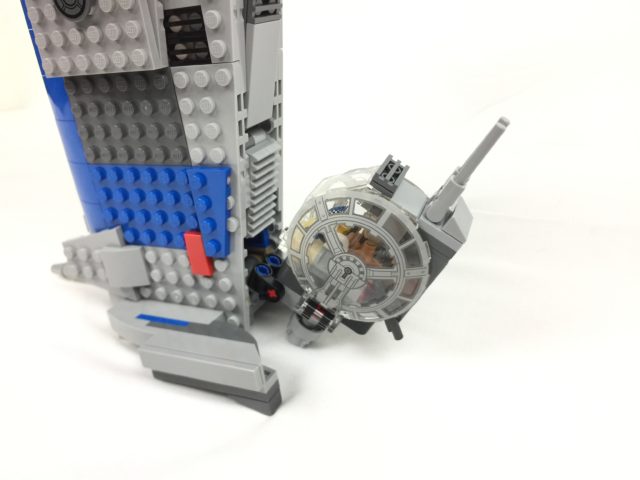 No storage for weapons. I think I’ve been spoiled by previous sets where there was a place to store weapons. You’ll have to just throw it in where you can and hope to not lose it.

Unexciting minifigs. Poe and Vice Admiral Holdo are the only named minifigs, and I’m guessing Poe will be available in another set, so Holdo is really the big draw here. But hey, Poe’s blaster is included!

It’s a solid build but without having seen the movie, it’s difficult to really gauge its significance. I am trying to keep an open mind about it because of the complete reversal of opinion I had about the U-wing from Rogue One. I was largely unimpressed with the model before seeing it in action. But after seeing the movie, and seeing how central it was to ferrying the Rebels from one location to the next, my opinion changed and I immediately went out and bought a set. I guess, that’s how I see things: if it’s not immediately aesthetically pleasing, how does it function? Is it important to the story? Does it get a lot of screen time? And with the Resistance Bomber, it does strike a resemblance to the Original Trilogy’s B-wing so it’s got that going for it, which is nice. As a set however, it just seems a bit boring. I feel like I should give it a 3 out of 5 stars on the FubbyTubby scale, mostly due to accuracy when comparing it to the few frames where it’s visible in the trailer. But comparing it to the BB-8 set or a Saturn rocket set, you’re probably better off with one of those or at least wait for the inevitable sale.

And a new feature I am debuting: Will it fit in a Ziploc Freezer Bag? I am going to add this to my reviews because I have too much crap and need to break down and store sets quick-like. So, the 1-gallon Ziploc freezer bags are my storage bag of choice and I try and do a minimal amount of breakdown to get it to fit. So, to answer the question: Yes, but you’ll need two bags and do a fair amount of disassembly.

If you’re still inclined to, you can pick up 75188 Resistance Bomber from Amazon. 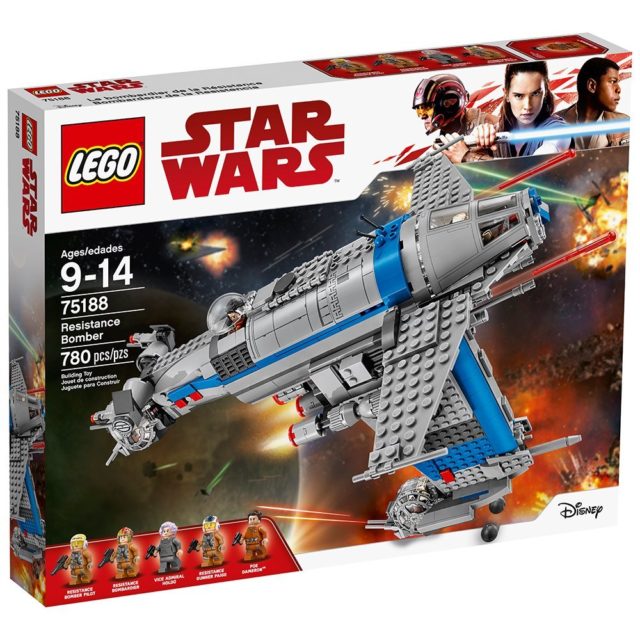