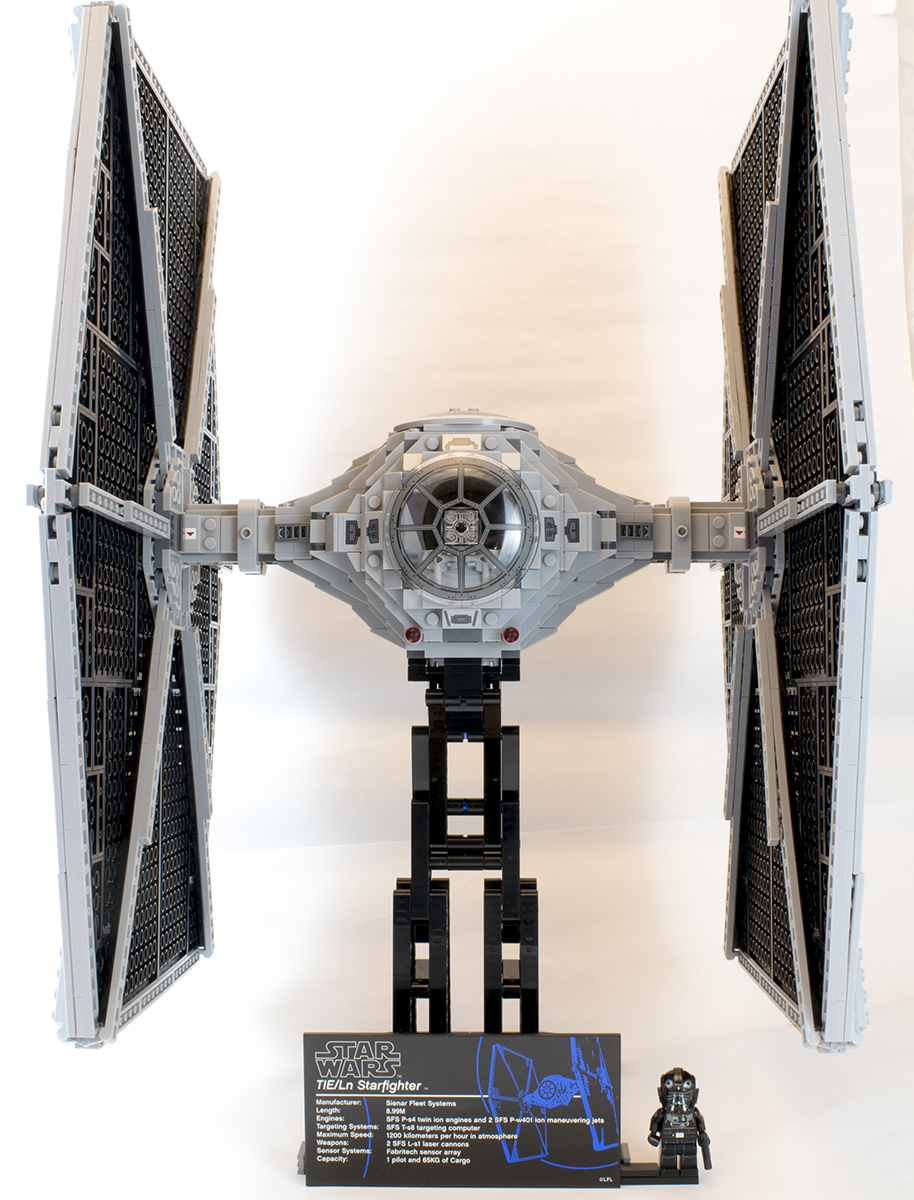 I was a bit apprehensive to review 75095 UCS TIE Fighter, since when I first saw the ship in Ace’s Toy Fair coverage, I thought it was a bit of a blocky mess. The TIE fighter is long overdue for some UCS love, though. The TIE Advance was one of the first UCS sets, owned by a few collectors and sat on by a bunch of people that scooped them up on clearance and hope to sell them someday to pay for their kid’s college tuition. Vader’s TIE Advance was a unique ship, and minus the cockpit and sticker plate, something you can likely build out of leftover parts sitting around. But the TIE Fighter, the backbone ship of the Imperial Navy and probably the most iconic fighter not called an X-Wing, went for 16 years before finally getting it’s due.

I only got into collecting the UCS sets with the Falcon, and that wasn’t even a first-run purchase for me (I think I got it in late 2008/early 2009). I’d owned a couple of other sets before that, like the Naboo Starfighter and Vader’s TIE, but they’d never impressed me all that much. Even for display pieces, they were absurdly fragile things that took up a lot of space. I sold them off… and I’ll admit there’s a bit of remorse to Vader’s given the crazy aftermarket prices on it now, but it was never a huge deal that I missed out.

Of course, fast-forward seven years, and I’ve purchased several of the things. The Falcon was like a glorious gateway to addiction that has been joined by the SSD, X-Wing, B-Wing, R2-D2, and Slave I. I don’t even like Boba Fett, but you have to admit that his ship looks cool, and it looks great sitting on a shelf. The UCS sets are a big investment in space though, something that my current situation leaves in very short supply (everything in Texas is bigger… except apparently apartments).

I’m also happy to report that my first impressions of the set, from those Toy Fair pictures, were absolutelyÂ wrong.

There is a blockiness to this set, but it’s not as bad when you see the set in person as it looks in pictures. It actually flows pretty well, the the stability and overall lookÂ of the ship as a whole make it sort of fade away. 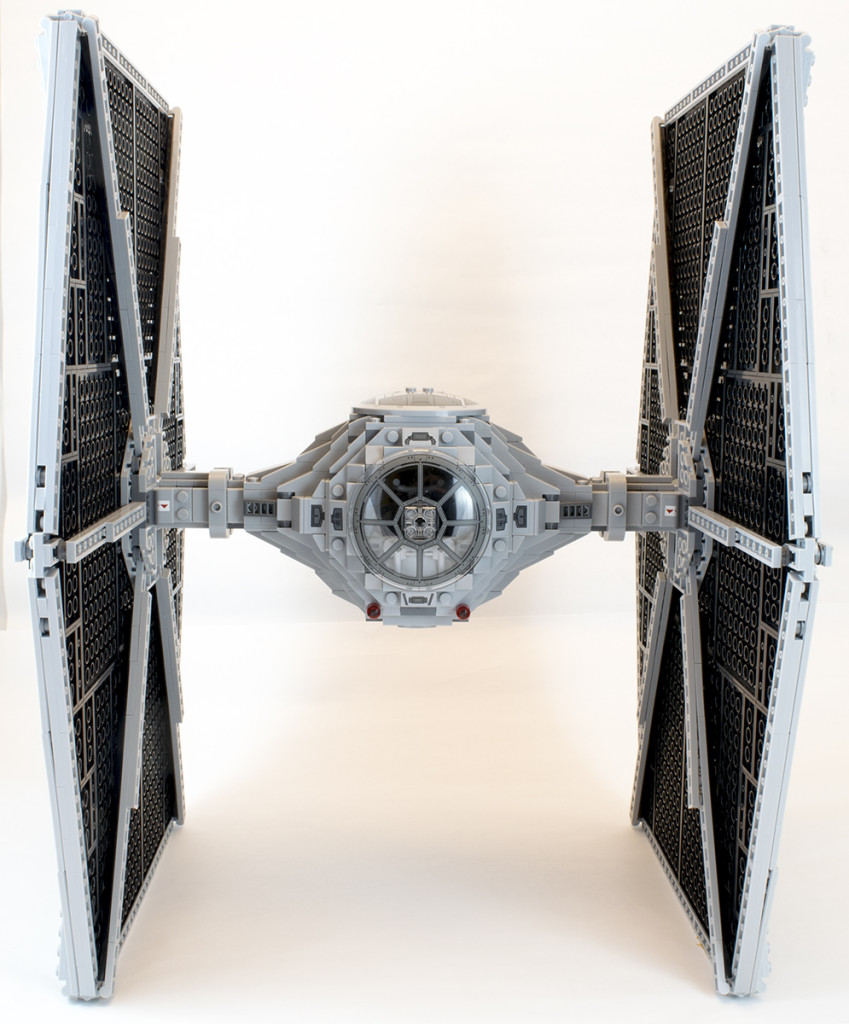 One thing to make clear though is that this thing is just huge. On its stand, it’s just a tiny bitÂ taller than Slave I is, and off it just a tiny bit shorter than Slave 1 from front to back. You’re also going to spend a lot of time in the build doing builds twice, given how symmetrical the ship is. 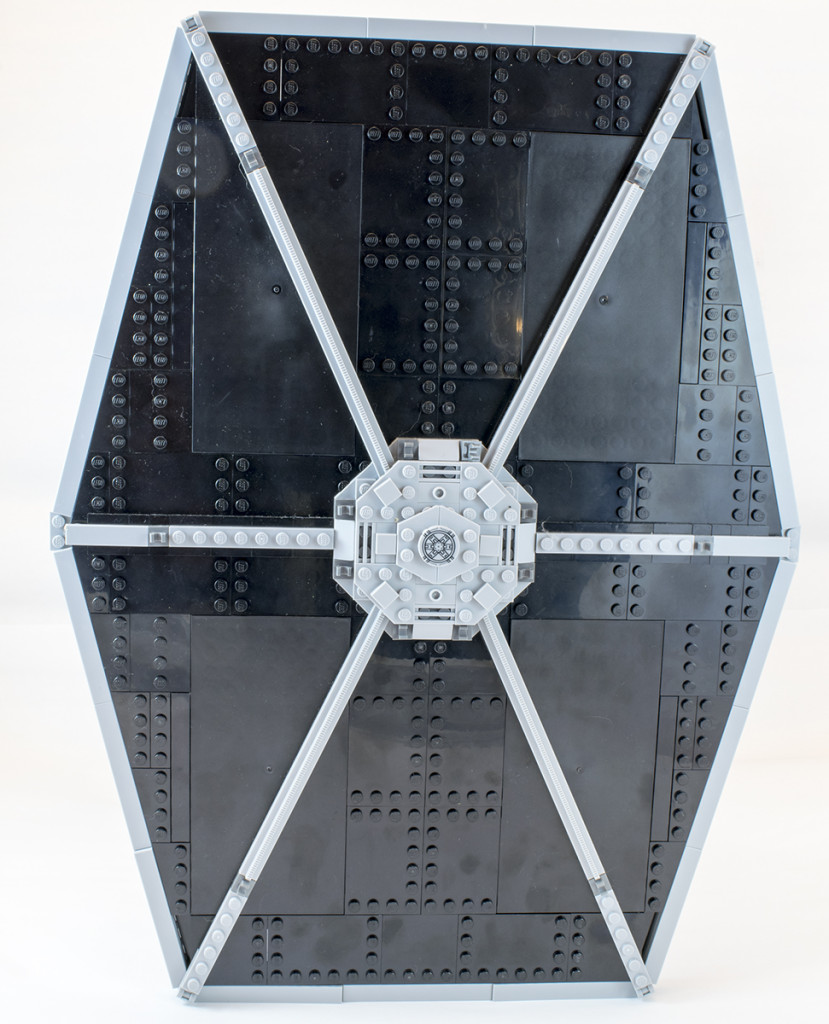 The panelsÂ are actually the last thing you build, and probably the most tedious part of the entire build, thanks to the layering of small wedge plates in interesting color choices. I always find it a bit strange that big sets like this, with their set palettes, hide parts in tan, yellow, and green. I suppose it’s a choice by the designers to help keep the part budget down, since certain parts are going to cost less in certain colors, but sometimes it feels like you have to add some bulk to hide them. It’s just a tiny bit here, mostly on the interior of the panels, but still there (and tedious). 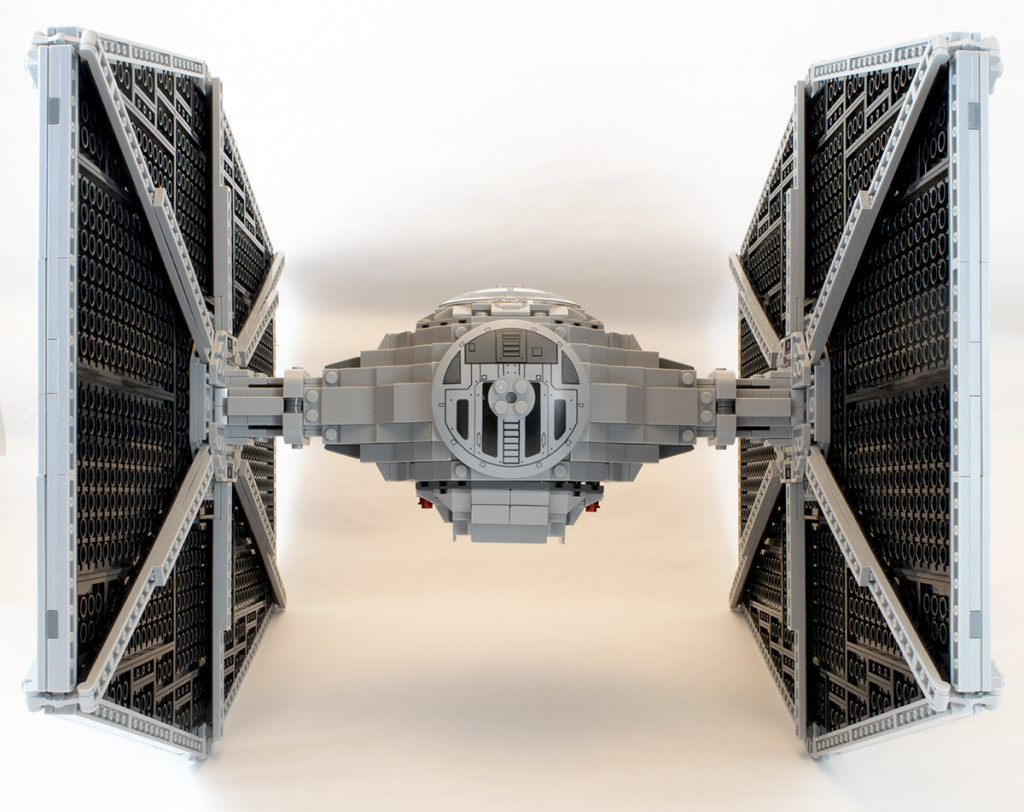 How they’re installed is a creative and interesting solution. The giant slope blocks are thankfully missing. Instead, the cockpit basically sits in a shoe that you build with the wing, and pins lock it into place. A few brackets and bricks lock it into place, and makes for a very sturdy and clean looking connection. If you’re curious, that bracket is sitting under the plate with the triangle sticker on it. 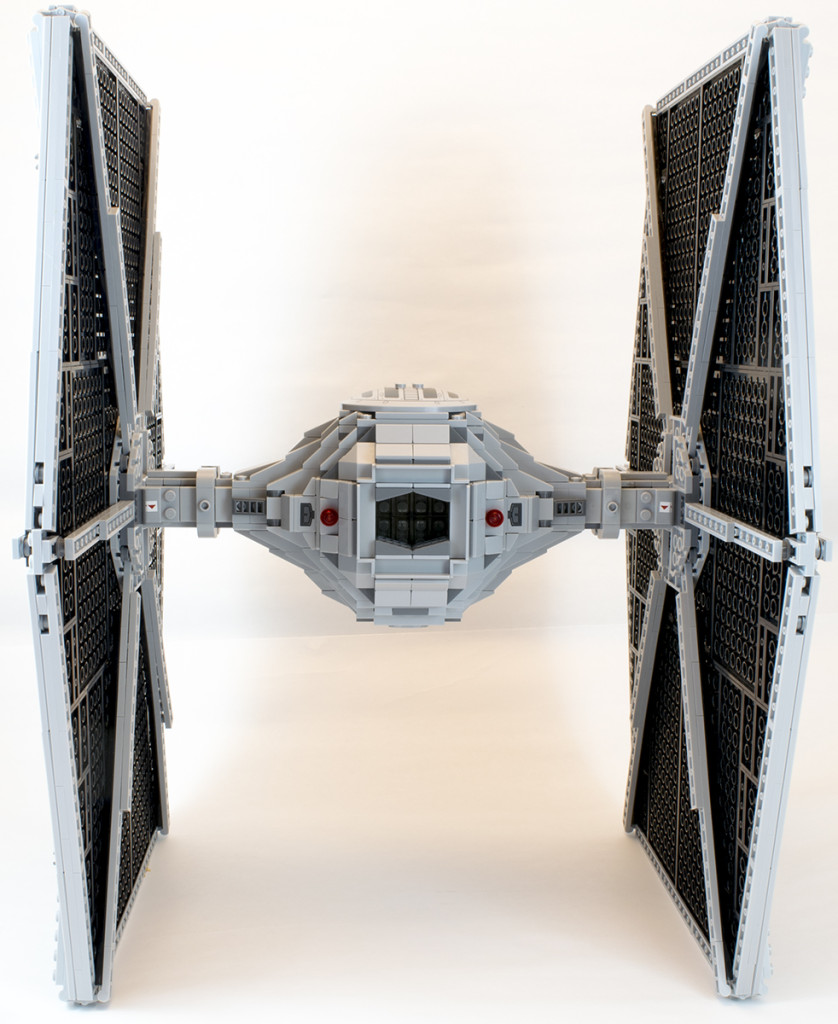 There are a few stickers on the ship itself, though most of them are tucked inside the cockpit where you’ll never see them and it was impossible to get pictures without tearing the whole thing apart. Seriously, this thing is like a rock, and easily the most swooshable UCS set that has ever been made. My daughter and I had a bit of fun the other day when I was swooshing this and she was swooshing the smaller System set around. 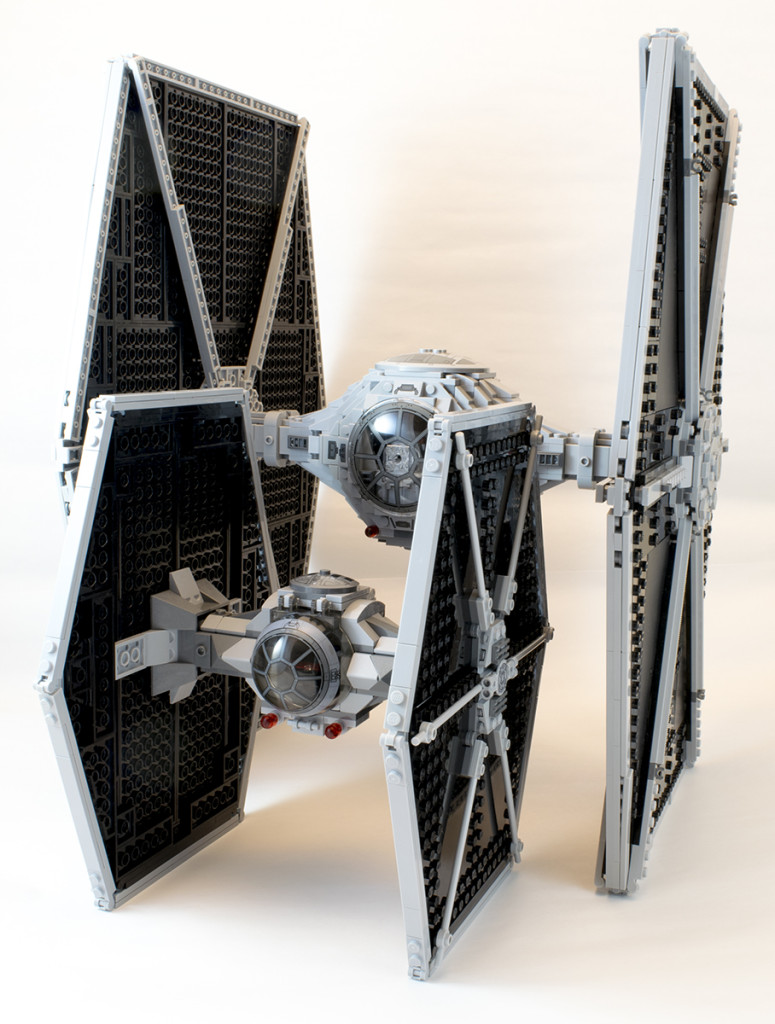 The last system-scale TIE fighter, 9492, was probably my favorite version of the ship. It got the size a bit better, the look was a lot moreÂ than plates stuck on the side of a bubble (okay, it was still that, but with borders now), and I purchased several of them while they were on Rollback at Walmart. They also got disassembled after this set got built and had to give up their shelf spots. 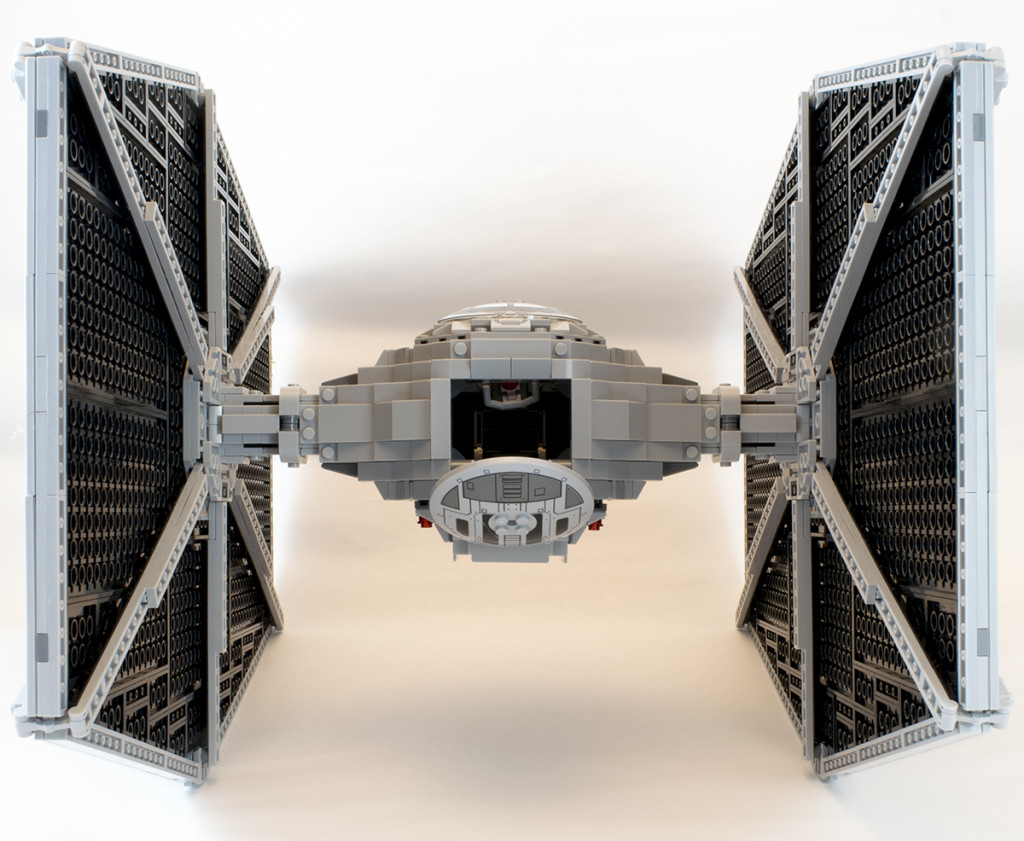 There are two ways to get into the cockpit of the ship, though one is more a function of the new windscreen dish having a hinge and the other as designed. The top hatch opens up, where you could drop a pilot if you were so inclined (a minifig pilot is far too small though).Â I’ll be interested to see some of the designs people come up with for a figure here. 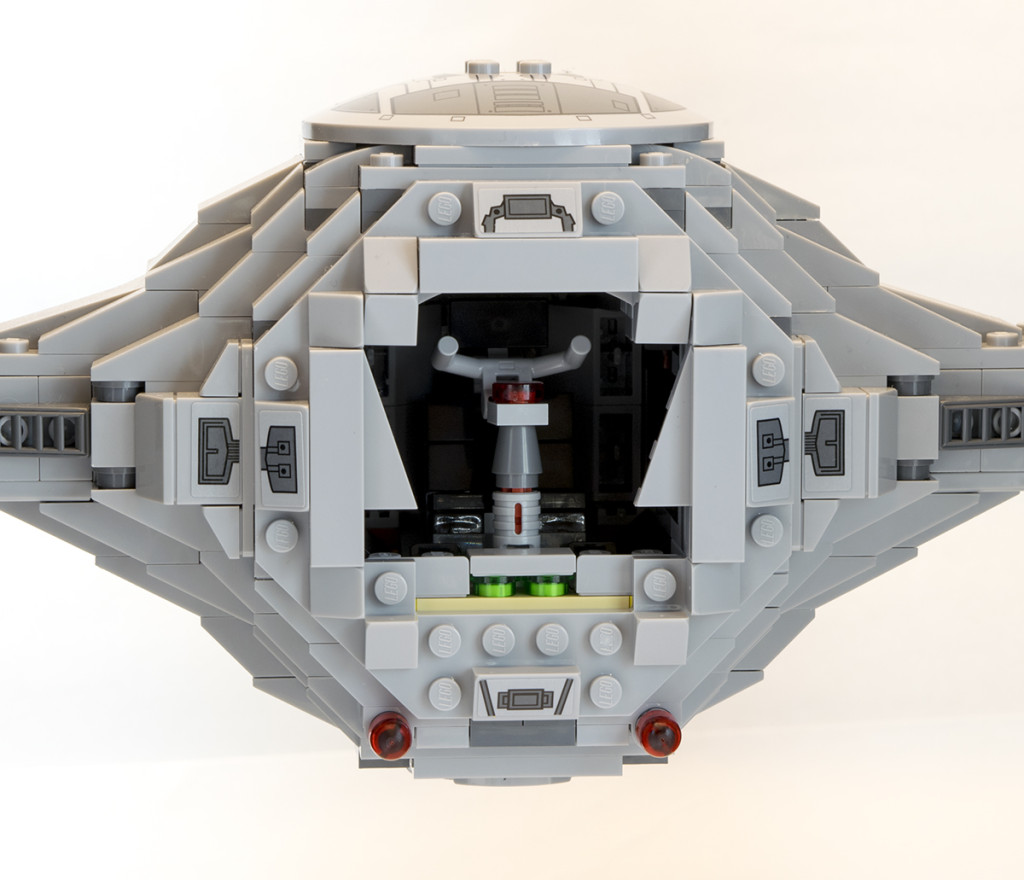 The cockpit interior is mostly control stick and opening. A few stickers accent the windscreen dome. I’m not sure how needed they are, but they just sit on some double-cheese slopes. We also have the blaster… spots… or whatever they’re called… on the front. I don’t know why I’d never noticed it before I watched Rebels, but how do red emitters shoot green lasers? They did in the OT, they did in the cartoon, and they do in the Episode 7 concept art (which is at the front of the instruction book). The TIE hasn’t changed much between the movies, which sort of fits a ship that’s so simple in design in the military… they can stay in service for a long time with fairly minimal upgrades. 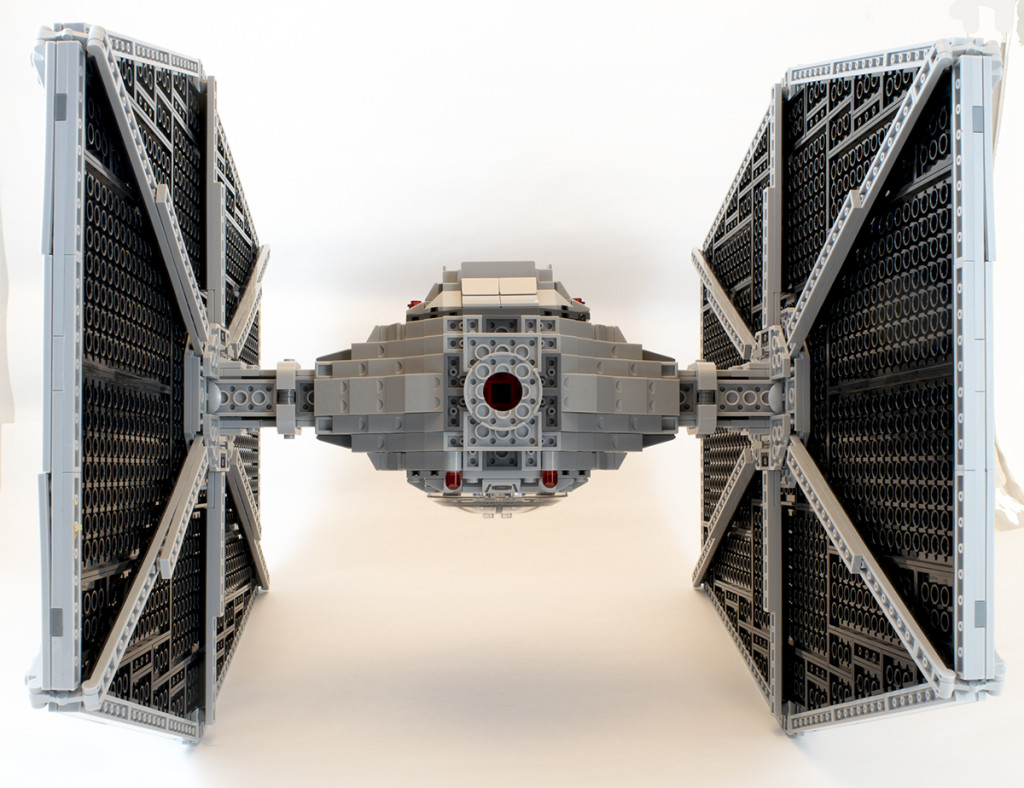 The underside has an opening to sit on the stand for the ship, which actually makes the whole thing pose-able as well. You can turn the ship around on the peg and angle it however you like. Also… a lot of slopes went into the making of this thing. You have to resist the urge to pick up the cockpit when you first build it and throw it like a baseball. 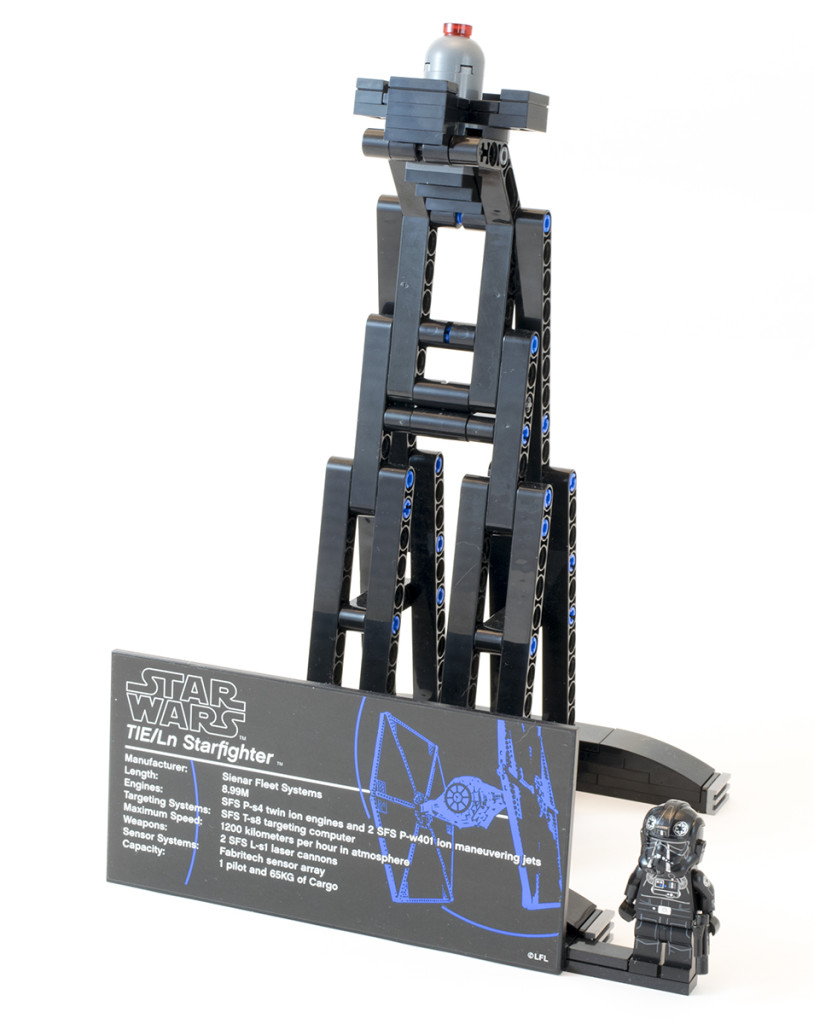 The stand is one of your typical UCS stands… all technic beams and pins. That’s not a bad thing, it’s perfectly functional and sturdy. We get the plate with the imaginary stats of our imaginary ship, and a little spot for the TIE fighter that’s included with the set. All UCS sets come with minifigures, and the recent trend is to make them unique to the set…

1200 km/hr in atmosphere! Wow! Who knew that hours and kilometers were measurements in a galaxy far away. The pilot is similar to the one we get in the TIE Advanced Prototype set that came out earlier this year, but it has a few additions, like some extra printing, more on the helmet, and fancy arms…

Those arms are actually pretty awesome, and I really wish there was a way to get them other places, given that the cost for this guy was $75 on BL when I checked a couple of days ago. I’m not a fan of the helmet leaving the head exposed, it feels like someone got lazy, but that’s more an artifact of a fleshy head being used. All that work to give us a two-piece Vader helmet and they couldn’t have done the same for this guy… or at the least given us the older helmet that went all the way back down. 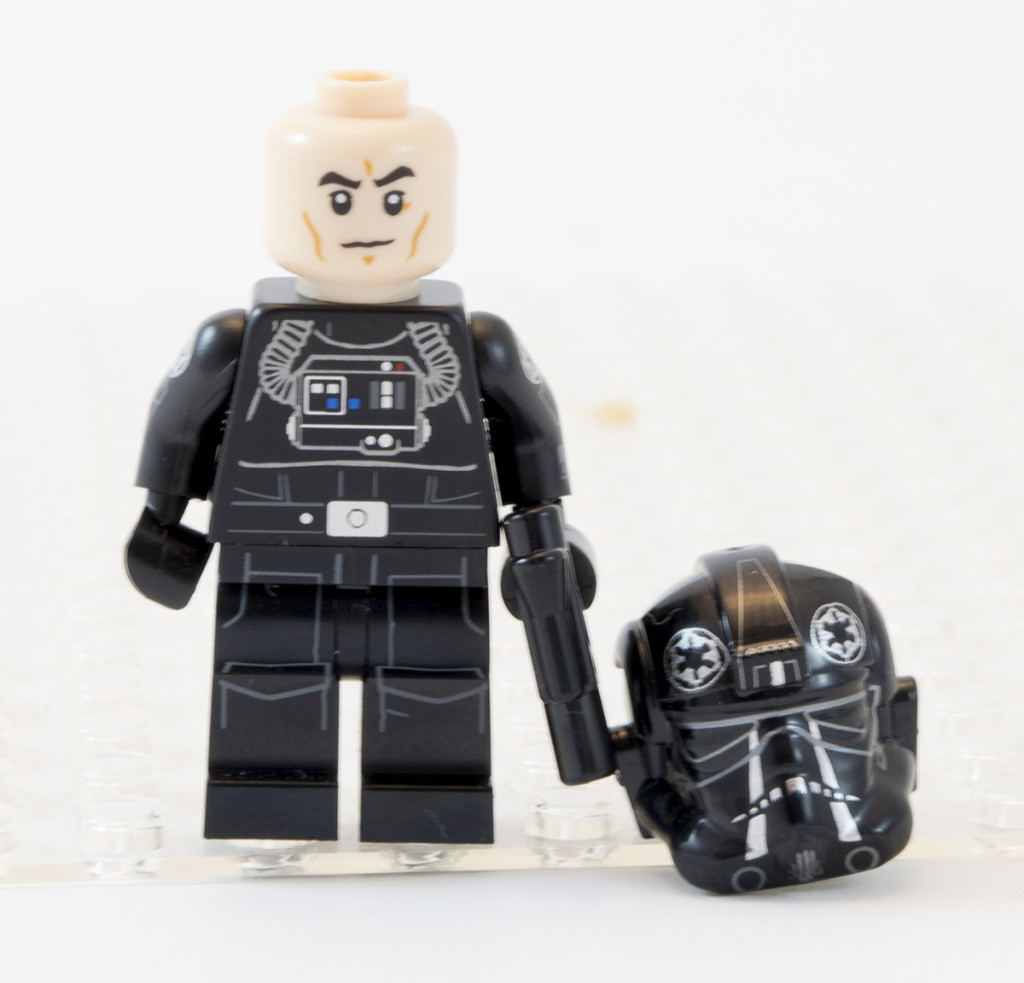 Guess our pilot is a clone though.Â The lines are pretty interesting… I’m just not sure what setting they’re from. Maybe Tron?

We have a few different pilots now… these are just the ones I grabbed from a quick shuffle through my Star Wars minifig bucket. It’s sad that it has it’s own, but it’s even sadder that I need to get a new one. The new guy will stay on the stand, though, since it’s a nice spot for it there. If it was easier to get more, I’d like to mix/match some parts with other figures to try and get something different. Strangely, the torso printing is different between the TIE Prototype pilot and this one, even though they were made within a few months of one another.Â The torso is from the TIE Bomber planets series, and the helmet is another repaint of the new helmet variety… they just didn’t use the printed black face on it. 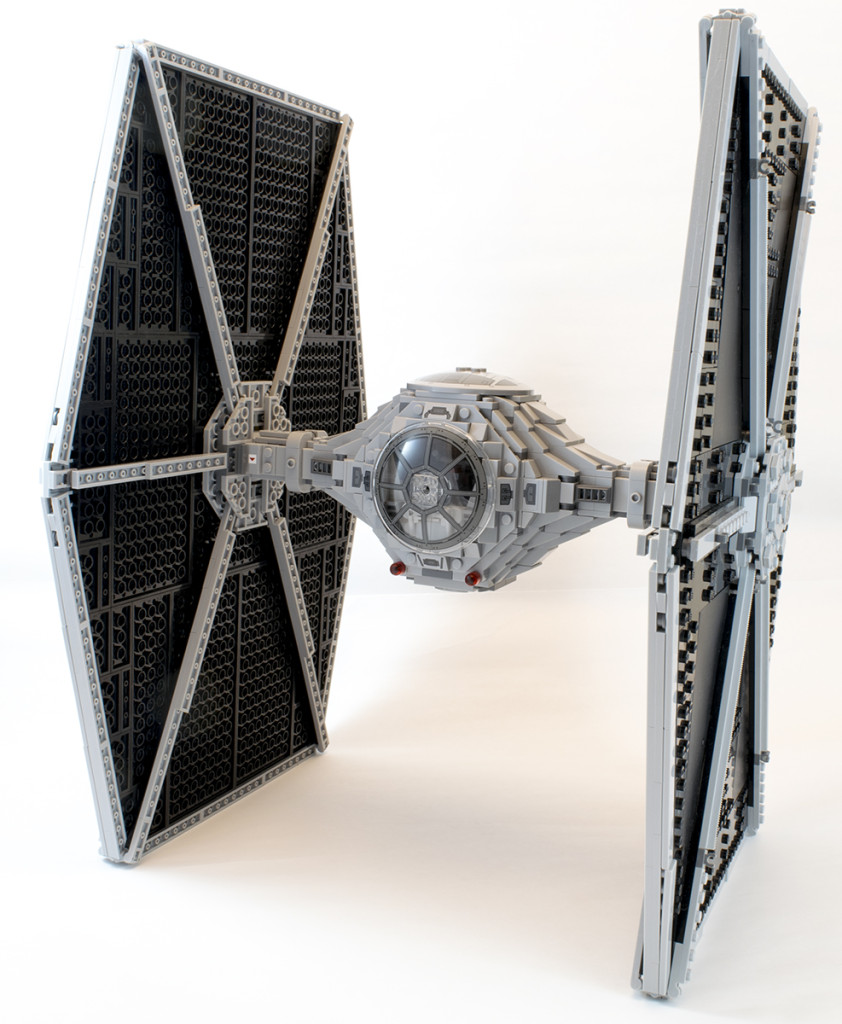 In the end, we’re continuing the tradition of some pretty stellar releases. If you’re fortunate to own Vader’s TIE advanced, I’m sorry that you’re going to need two of these guys to do a proper display. Otherwise, I’m thinking that I need to display this one chasing after the X-Wing… and you probably still need two. This is a solid five out of five set, and a worthy addition to any collector’s shelf. 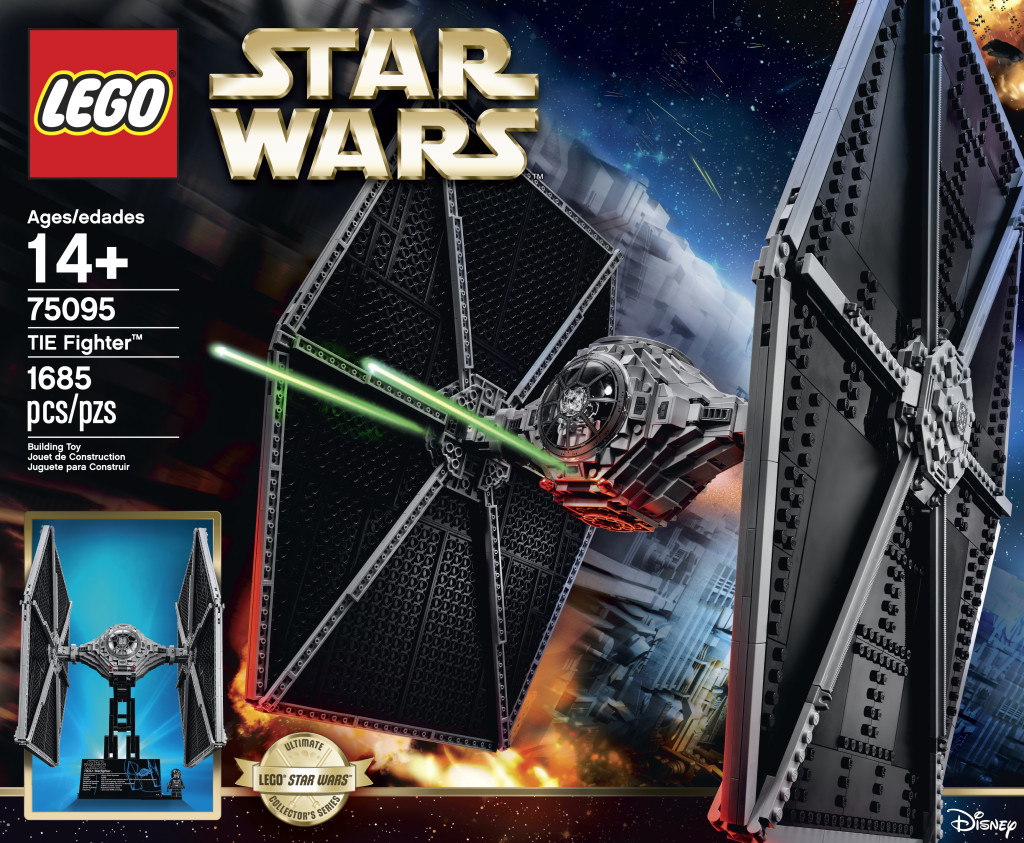