First up is a Unikitty whose face changes from “Cuteskitty” to “Cheerkitty” with a flick of a wrist. I’m guessing this Unikitty is bigger than the brick built one you get in a set, maybe about the same size as the awesome keychain light. That being said, I don’t believe that it is one of the four exclusive minifigs that LEGO plans to give away and it is probably just an item for sale at the booth.

Next is a reveal for an upcoming set based The LEGO Movie coming out January 2015. It looks to be a small set featuring Batman, Angry Kitty, a Micromanager, and a skeleton. Hopefully this picture isn’t cropped and hiding a gigantic model in the background somewhere because this would be a cheap way to get Angry Kitty even though she is a different design than the one that comes in Emmetâ€™s Construct-o-Mech. 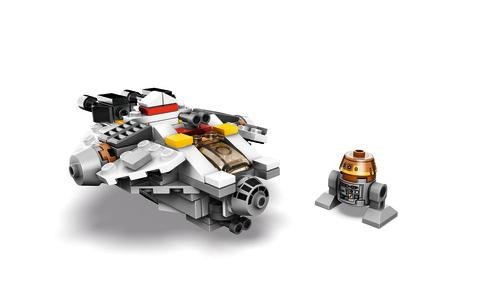 The second reveal is the Star Wars themed retail exclusive mentioned in my previous article, The Ghost ship. Retailing for $39.99 it features the R2 unit, Chopper. And being built in the same Chibi style as Rocket’s Warbird, my hope of a full-sized TV series Batmobile is quickly diminishing. The Ghost, Batmobile, and Warbird all retail for $39.99 and are limited to 250 each per day of the con not including preview night.