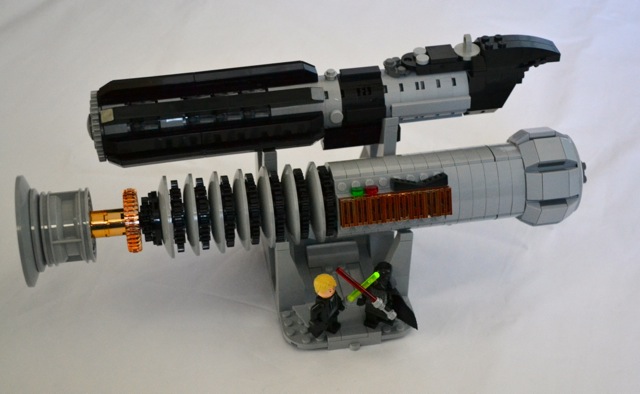 I’ve enjoyed looking at scott34567‘s builds since they first caught my eye with his Cyclops visor back in 2012 and then the virtual models of lightsabers replicas started to roll in soon after. I’m a fan of 1:1 scale weapons and props and even more so of brick built lightsabers. He quickly added them as a project on CUUSOO and has respectively evolved/streamlined the project as time went on and guidelines changed. After two years of climbing towards the summit, the project has reached the peak in the form of a pair of lightsabers belonging to Darth Vader and (SPOILERS!) his son, Luke Skywalker. The set is proposed with a custom stand to display and figures of the characters, which would stop about 12% of people who would ask “what are those?” when they spot them on your desk. Hey, don’t knock it. That’s 12% less righteous indignation and eye-rolling on your part, wasted on these people that only come out of their caves to work and presumably forage for food.

This project, to me, is a lot like the LEGO Birds project that is currently in review. It fits very firmly as a display piece and less a toy. Unlike birds, it would have the pre-existing LEGO Star Wars fan base and appeal to those outside the AFOL community that buy the pop culture sets. Also, it’s still a toy. I always enjoy swinging around brick built sabers and make sure I build mine sturdy enough to do so.

The pre-existing Star Wars license is still an obstacle that no set has overcome thus far and it means that in this first upcoming review under the LEGO Ideas banner, it will be two sets based on comics and two on Star Wars. As it stands, the size and content of this set, would make it the front runner in this uphill battle and I wish Scott much luck and congratulations!