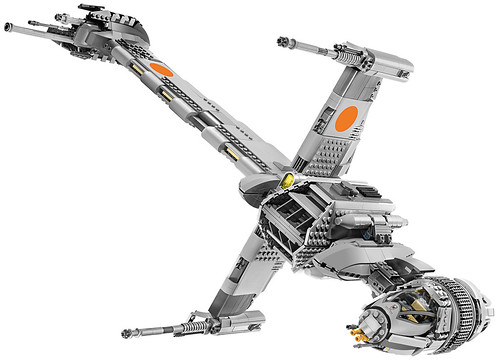 Leaked earlier this year from a Dutch toy site, we now have pictures and data about this year’s second LEGO Star Wars Ultimate Collectors exclusive: 10227 B-wing Starfighter. Here’s the lowdown: $199 USD, 1,428 pieces, available starting in October from LEGO Shop@Home and Brand Retail locations. The model appears to be larger than minifig scale and does not include any minifigures. It’s kind of a missed opportunity, though. I would have loved a proper minifig-scaled UCS B-wing. The UCS Falcon and Imperial Shuttle before it worked really well; the Executor, not so much. Anyways, pics below, followed by the designer video whenever they decide to make it public, and finally the official press releaes after that.

Take on the Empire in the Ultimate Collector Series B-wing Starfighter!
Now you can experience the ultimate B-wing Starfighter from the Star Wars galaxy like never before. This fantastic model features everything you would expect from our premium collector range, including rotating, self-levelling cockpit and realistic wing configurations for landing and flight. And when you’re finished battling in the skies above Endor or helping to restore freedom in the galaxy, place this highly detailed B-wing Starfighter on its own dedicated display stand and fact plaque. Measures 26â€ (66 cm) wide and 15â€ (38 cm) high in flight configuration, and 17â€ (43 cm) high on display stand.

Available for sale directly through LEGOÂ® beginning
October 2012 via shop.LEGO.com, LEGOÂ® Stores or via phone: