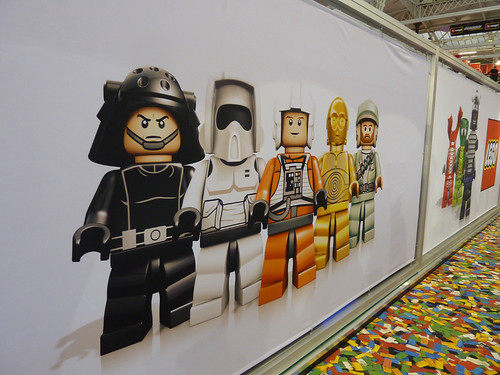 Today, I had the privilege of attending the UK Toy Fair 2012, at Olympia in London.Â  Pictures of the inside of the Lego stand were strictly forbidden, so you’ll have to make do with a few snaps from the outside.Â  I can, however, share information about what I saw … and let me tell you, the summer wave of Star Wars sets are AWESOME!

Series 2 of the Planet Sets

Then I saw 9678 Twin-Pod Cloud Car & Bespin … which is orange, not red, like we may have expected.Â  The Lobot figure features new printing on the head and torso.

And finally, we have 9679 AT-ST & Endor … which is a new build and once again features the printed flag piece showing the detail of the cockpit, like we last saw in set 4486.

All were listed for an August release at the same price as Series 1.

I was then swiftly moved on to the other sets which are set to be released in the summer, starting with …

9515 The Malevolence … this is definitely not minifig scale, before anyone asks.Â  It’s pretty sturdy though and features a carry handle for easy swooshing.Â  There were stickers on the body to represent all the little rooms of the ship, which helped with the scale.Â  The weapon on the side features a rotating wheel and a flick fire mechanism.Â  The figures all seem recylced, apart from Padme Amidala, which looked new to me.

9497 Republic Striker-class Starfighter … not a ship I am overly familiar with and it’s main play feature was it’s movable wings that can move 90 degrees, from beside the cockpit to sticking out like “normal” wings.Â  All new figures, including a square bodied droid (T7-01).Â  Not one that I am gonna bother with, personally.

9498 Saesee Tiin’s Jedi Starfighter … is similar to previous starfighters, although with a new cockpit design.Â  It did seem a bit sturdier in the main body and featured a new droid from what I recall.Â  The new fig for Even Piell feature a new head mould that looked pretty cool.

9500 Sith Fury-class Interceptor … I have no idea what this ship is (not really into Expanded Universe) so it was a bit of a mystery to me.Â  It’s wings have moving parts at the back.Â  The figs were certainly unique and pretty cool looking.Â  The Sith Troopers had helmets that looked like forerunners / afterrunners to Darth’s helmet .. a bit like the development of the Clone helmet over it’s phases.

Again, all launched in August.Â  I didn’t have time to note the prices as I was pretty quick in looking at these as both myself and the person showing me around wanted to get to the following 3 sets …

9499 Gungan Sub … the sub itself is a vast improvement on the previous version, with a more rounded look.Â  The best part though … Queen Amidala.Â  This figure is quite simply stunning.Â  It’s EVERYTHING we’ve wanted.Â  She’s in her red outfit, and comes with a custom moulded skirt piece, white head and headpiece.Â  Qui-Gon Jinn, Obi-Wan Kenobi and Jar Jar Binks feature too … not sure if these are any different, I was too busy drooling over the Amidala figure.Â  You will buy this set for that figure alone.

9496 Desert Skiff … a beefed up version of previous incarnations of this set, featuring new minifig versions of Lando Calrissian and Boba Fett.Â  If you thought the last Boba Fett fig we got was good … this is even better, with leg printing certainly, as possibly arm prints too.Â  A different coloured cape as well.Â  We also get Kit Haba, although he just looked like a Clone Wars pirate to me.Â  The Sarlaac was new too.

9516 Jabba’s Palace … now, this set was a real beauty.Â  For those expecting to get Jabba’s entire palace, you’re gonna be disappointed, but the important parts are here.Â  The throne room, with moving platform covering a “pit” (which is big enough for a fig to lay down in, but no more) is well constructed with plenty of play features … you can easily recreate the death of Oola into the pit of doom!Â  The tall element which you may have seen in the prelim pics has a rendition of the Palace doors (which can slam open and closed), complete with the pop out eye, which uses a printed 1×1 round tile.Â Â  With all that aside, the real reason you’ll want to buy this set is the minifigures.Â  The new Jabba is stunning, in a lighter colour than before, fully printed and in two parts so you can articulate at the torso (does Jabba have a torso?!).Â  Bib Fortuna looked all new to me, Salacious Crumb is a custom moulded & prnted figure and is just perfect.Â  Leia in Boushh disguies is awesome … just as you’d expect, with her grenade again represented with a 1×1 round tile.Â  The Gamorean Guard is also new, with a new headpiece and printed detail.Â  Oola is along the lines of Aayla Secura, although in lime green, obviously.Â  For this one, I noted the price … it’s a hefty Â£119.99, but defintely worth it for the figs alone.

9509 Advent Calendar … features another raft of nicely made micro ships, mostly Eps 1 to 3 and features 2 exclusive figures … Darth Maul in a Santa outfit and R2 Snowman, with carrots on his body and a top hat!

All out in August, expect the Advent Calendar which is due in September.

I also saw the Hoth Board Game, which looked great … although the rules sounded complicated.Â  You’ll buy it for the microfigs, which, despite being really small are instantly recognisable.