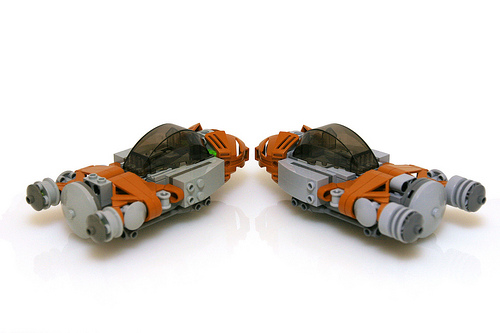 I am obsessed with the M-wing. When I bought my first kit from Jon Palmer way back when, I had no idea what I was in store for. I became absolutely consumed with making more and more and eventually assembling a fleet of 20 ships. 15 of those ships will soon be in the hands of Bothcon attendees. The originals were made back in 2003 using old grays, so I wanted to see if and how it can be updated using bluish grays. Don had already done something similar with his version that he made a few years ago. So I admittedly took a lot of design cues from him to come up with Version 2.0.

The above photo shows a side-by-side shot of the original M-wing by Jon Palmer along with I like to call Version 2.0 or V2 for short. V2 is made from new bluish grays, and replaces a few elements for a sleeker look. The effects from the updated elements is a reduced number of visible studs, a slightly longer body, and curvier hull. 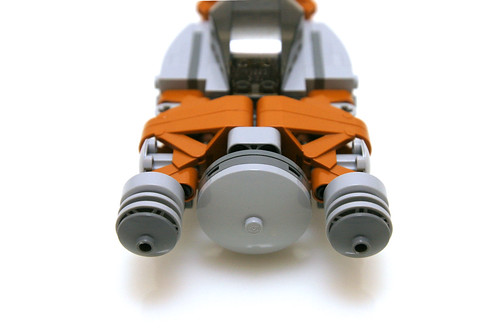 Most of the updated elements are in the front.

The two freestyle wheels have been replaced with these wheels. Since the newer wheels are a little longer, I added a round plate behind the 4×4 dish for balance. Gone is the single round plates that anchored the 2×2 dishes and replaced with Technic half pins.

The 1×2 Technic brick with holes is replaced with a 1×2 Technic liftarm thick. This eliminates the two studs on the top making it much smoother. Sometimes the liftarm isn’t available in a particular color, such as white, so a combination of 3L bars, 2x Technic liftarm thin, and Technic pins works in a pinch as seen in Don’s modified M-wing. 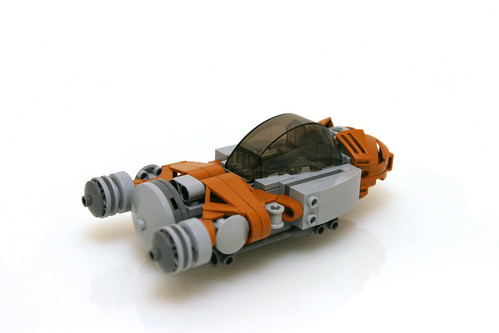 The 2×4 slopes on the sides have been replaced with 2 1×4 curved slopes. Don’s version uses 2 1×3 slopes with an extra 1×2 tile to keep things nice and smooth. 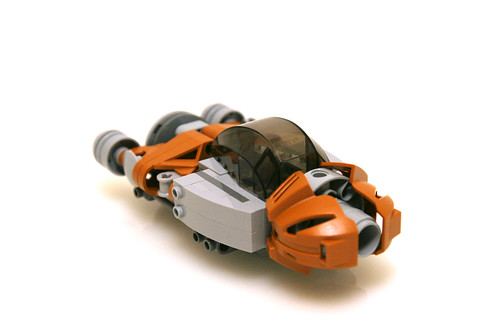 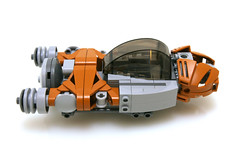 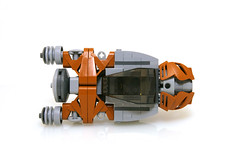 Side and top views, the best view of the new elements and how the curved slopes works in the overall design of the ship. Putting my ego aside, I feel like this is the way Jon would have built it using today’s selection of elements.

I made two other changes to the ship that I failed to photograph. There is a 45 triple slope in the cockpit; it’s been replaced with 1×1 cheese slopes (or 1×2 if available). The bottom wedge for the front also has cheese slopes for the two studs on the wide end. It’s a very slight modification and barely visible, and probably didn’t have to be made, but after putting them on it looks funny to me now without them. This is probably just meaningless drivel without showing before and after pics, so I’ll try and remember to shoot them for the next article.

There have been other M-wings made by other AFOLs which we will be highlighting in the next few days. It’s a testament to just how awesome this kit is to inspire one to make it their own. Like Iare Tosevite said on the forums, it’s a design that’s stood the test of time. Revisiting the kit the past few days brings back a wave of nostalgia and I hope that everyone who gets one will be just as impressed with it as I was in 2003.