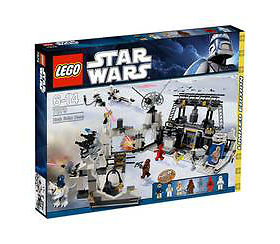 Ready the attack! The Imperial troops discovered and prepare to attack the secret Rebel base on the ice planet Hoth. Han Solo, Chewbacca and Princess Leia are ready to defend the base, while Luke Skywalker is treated in the Bacta tank by the medical droid 2-1B. Also includes R-3PO and two Snowtrooper minifigures, base with Tauntaun stable and Tauntaun, functioning crane, two radar dishes, ice trap (thanks Oky Wan Kenobi) and Speeder Bike.

The box says limited edition, so it’ll probably be an exclusive. It’s a step above anything we’ve gotten before, but I still wish it had an Ion Cannon. I mean, COME ON!