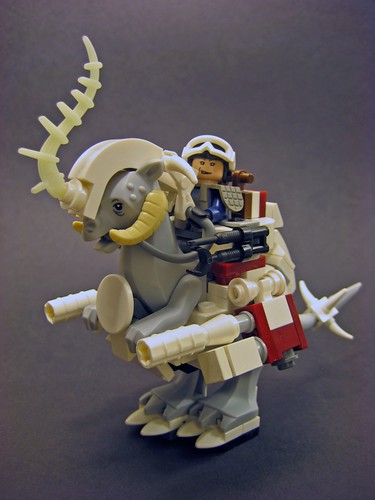 No doubt by now you’ve seen some of the awesome battle tauntauns on display at the Fan Gallery during Star Wars Days at LEGOLand California. The one above is by Paul Meissner (legosamurai), the battle tauntaun is his brainchild of an idea, it is a tauntaun outfitted with weapons and armor to help the Rebels defend their base against Imperial forces, probe droids, and the occasional pesky wampa or two. Highly customizable, they can be armed with a wide array of ordnance, surveillance gear, and other equipment depending on the task at hand.

I’ve been searching for a community project idea that is easily accessible to just about everybody, doesn’t require a big budget of parts, and is open to interpretation. The Battle Tauntaun project fits the bill perfectly. Your challenge, should you choose to accept it, is to build your own Battle Tauntaun, post it in our Community Project thread, and add it to both the Battle Tauntaun flickr group and the FBTB: flickr Outpost group. If you need some inspiration, take a look at Paul Lee’s and Brandon Griffith’s Battle Tauntauns below. Pictures by Don: