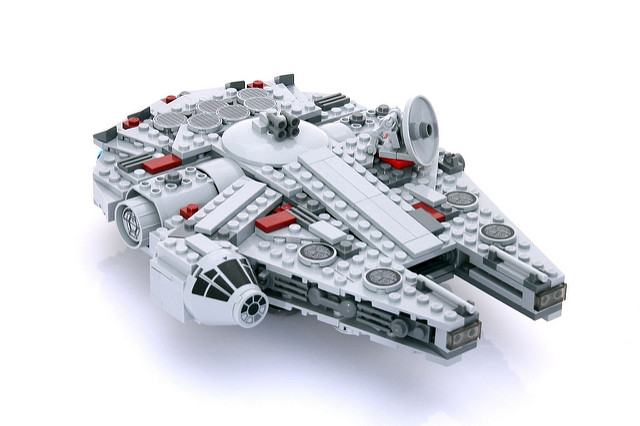 When 7778 MIDI-scale Millennium Falcon was announced with a preliminary (read as: leaked) box shot, people were up in arms about this set. Most of the complaints were focused on the odd scale. “It won’t fit with the rest of my collection” was a pretty common sentiment around the community. I, for one, and maybe a few others, saw the genius in this new scale.

Midi-scale by definition is larger than the established MINI scale, and smaller than System or Minifigure scale. The real genius of the scale lies in the fact that it can bring larger ships from the Star Wars universe down to a more affordable size. Before 7778, there were four Millennium Falcon sets, only one of which was priced less than $99. Excluding the MINI, once those sets became discontinued, the aftermarket price shot through the roof. 7778 is priced at a mere $39.99 MSRP making it much more obtainable than any of its predecessors. It’s also larger, more detailed than the mini, and a better value. Plus the smaller scale and smaller price point means more people can get one maybe two and display it on their office cubicle, bookshelf, or mantle, just about anywhere really. 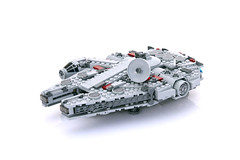 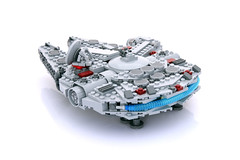 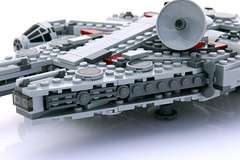 There isn’t really much to comment on the ship overall. It looks like a Falcon plain and simple. Plenty of detail was captured: rotating radar dish, gunner stations, corridor to the cockpit, storage bay between the mandibles, mandibles, even greeblies along the mandibles. Plenty of plates were used for the top, back half of the ship to give it that rounded off sloped look and feel. Blue tubing makes a cameo for the engine glow as it did in the two System scale sets. Red plates and tiles are strewn about here and there adding a bit of detail and breaks up the monotonous gray palette. The only really odd thing about the set wasn’t anything on the ship, but the packaging. Most, if not all, sets LEGO produces have an inventory of all the elements printed in the instruction manual. For 7778, the inventory is printed on the back of the box. Also, the Falcon is packaged in a Clone Wars brand packaging instead of the Original Trilogy “Special Anniversary Edition” packaging that graces Vader’s Tie, Echo Base, The Battle of Endor, and Home One. It’s even categorized under The Clone Wars at Shop@Home

instead of Star Wars Classic. I guess it makes up for the mistake of having 7669 Anakin’s Jedi Starfighter listed there.

As with any modern LEGO set, there are stickers to contend with. I don’t mind stickers anymore as they are here to stay and not really going anywhere. I do wish the cockpit piece had been printed instead as it is a bit of an exercise. There are three stickers to place on a 4x4x2 Cone element to simulate the cockpit windows. I thought I was being smart in lining up the stickers’ adjacent edges parallel to each other, but I was wrong. The two outer stickers should have been closer to the center sticker at the nose and further apart at the end in order for them to line up properly. But regardless of that misstep, the stickers do their job. The only printed elements were the 6 Round 2×2 Tiles with Grill Fine Mesh Pattern that have been recycled from previous sets. 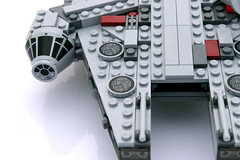 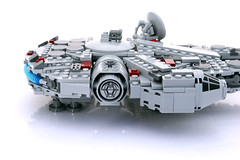 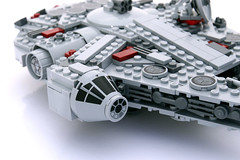 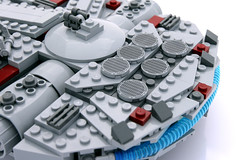 The bottom of the ship is quite, quite boring. There is landing gear, two boat studs, and the ventral gunner station. I guess I can’t really fault the designers for making it so plain, but it is the least exciting aspect of the model. I suppose that’s a good thing. 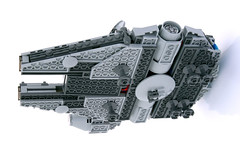 My favorite part of the ship has got to be the gunner stations. Using the binoculars on a clip light plate captures the essence of the weapons perfectly; plus the radar dishes the weapons (both dorsal and ventral) are situated on rotate to blast away Imperial TIE Fighters at any angle. 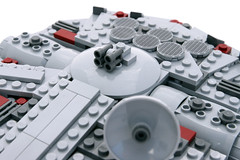 Overall, the ship seems a little long, or maybe not wide enough. Measuring a little over 9″ long and 7″ wide, it fits perfectly in your hand for swooshing around your basement, cubicle, living room, or office. When sitting on your desk or shelf, it’s a real pleasure to look at because of the level of detail the designers were able to squeeze out of each element used. I really wish LEGO had made display stands for the ship, much like they did with most of their UCS sets. The UCS X-wing and TIE Interceptor both had stands that posed the ship either horizontally or angled up slightly. The MIDI-scale Falcon should have come with a ball jointed stand so one can angle the ship in any direction to give it the effect of flight. That would have been sweet. If anyone wants to build one that works this way, is sturdy, and can post instructions, an exploded-view, or an easy how-to, let me know and I’ll post it on the front page.

If after reading this and perhaps even seeing one with your own eyes, you’re still not convinced this is a must buy, it IS a great source of angled plates in light bley; so at the very least, it’s one saving grace is that it is a pretty decent parts pack. 356 pieces for two twenties seems like a pretty standard price/parts ratio. Given that it is a Walmart exclusive, you may even get lucky with a rollback or two. Personally, I think LEGO has a real hit on their hands and I can’t wait for the next ship in the series. Surely an X-wing will be made, but maybe LEGO will go the route of Capital ships like the Tantive IV, the Super Star Destroyer, or even Home One. Whatever they decide on next, it can’t get here soon enough. 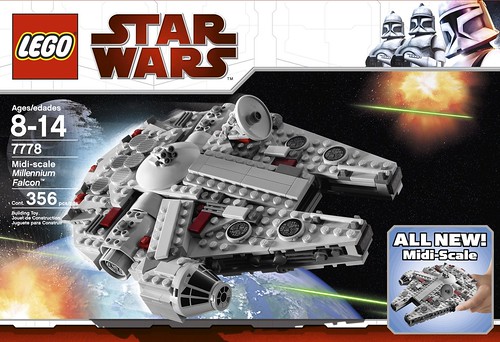