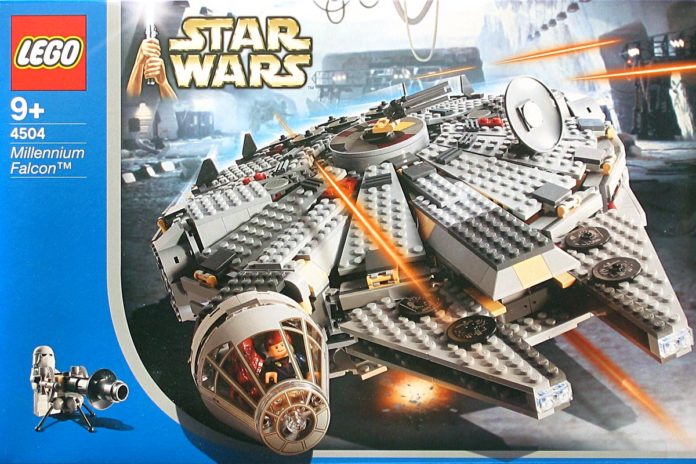 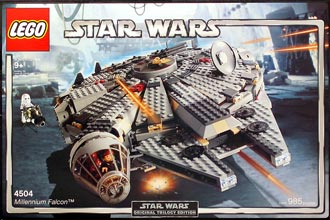 One of the first things I noticed about the Falcon box was that it featured a flip-up front cover like some of the older LEGO boxes had. But unlike the older LEGO sets, underneath the cover wasn’t a plastic window where you can gaze upon the insides and see some of the goodies you’ll be getting. Instead, there was just more artwork, including an extremely large mockup of the now infamous Death Star Space scene and the numbers that bring dread to everyone’s ears: 10131. There’s no doubt it’s a TIE set of some sort, but I digress.

For $99.99, you get 985 pieces which is a pretty good price per parts ratio and more than 300+ parts than the previous incarnation. When I opened the box, I immediately noticed a correction sheet and some loose plates. Seems like step 57 wasn’t quite right and the plates were necessary to fix the flaw. I spent about 3 and a half hours on and off building the set while watching TV. I have mixed feelings about the construction.

First things first: the minifigs. Han and Leia are peach or “flesh-toned” or whatever the proper term is. i don’t like them. I wish they stuck with yellow. Leia comes in her Hoth outfit as does Han, but the instruction manual for Han shows him with a tan colored torso design whereas the minifig you actually get is dark blue. Chewie and Threepio are always a treat to get. And the snowtrooper is a little lame if you ask me. The inclusion of the Snowtrooper recreates a very specific scene, a scene that has more than one Snowtrooper and when you compare the Falcon to the E-web Cannon, it’s almost ridiculous to think that the ship was scared of this puny thing. But eh, not like there are a lot of opportunities to amass a Snowtrooper army for cheap. It should be noted that the Snowtrooper torso is incorrect and what you get instead is a Clonetrooper torso. Call LEGO Shop at Home for a replacement.

I enjoyed the build and the high number of parts gave it a level of detail the first Falcon never achieved. The designers went out of their way to include detail after detail in the interior. There is now a full pathway around the 95% of the ship, 5% being blocked by the escape pod. Speaking of escape pod, the designers must have had this cartoon in mind when they designed it, because it is now fully enclosed, but it’s so big it blocks part of the interior walkway. On the opposite side of the ship, if you pull out the docking bay part way, a walkway lowers to the ground. Awesome detail. The Dejarik hologram board is back and there is now a nice constructed hyperdrive engine. Although there isn’t a hidden floor panel where you can hide the rebels during an Imperial inspection, the floor is hollow and with a little work you should be able to customize that feature. Although not perfect, given the constraints of the design and the brick, the top gunner station is a nice addition and will in fact seat a minifig. A complementary belly gunner station was not included, but that’s the beauty of LEGO, you can make one yourself if you’re so inclined.

The overall structural integrity of the ship is quite solid. Attaching one of two large ribs that creates the outer hull was quite unwieldy but easier the second time around. The plate flaps that form the top are great and reflect a common technique also found in some Harry Potter sets that contruct the roof from angled plates than anything else. Any fears that this approach would create a less sturdy ship should be put to rest. It also gives it a more unrefined look and feel that more accurately conveys what the Falcon is really like.

There are only a few things about the design that really bugged me. The 1 thing that really bothered me was that I noticed that some of the bricks didn’t bind as well as I’m used to. My first experience of weak studs was step 7 and the 4 tan 1×3 plates. They just didn’t bind as well as some other parts, and those plates weren’t the only ones. I’d be interested to see if others experienced the same thing. I do know that Gareth mentioned weaker bindings with the 2004 minis, so maybe it’s more widespread than initially thought.

The other minor gripes I have are some of the construction angles. I probably have my own idealized image of what the Falcon should look like, heck, who doesn’t? I felt like the mandibles were way too small and should be wider and thicker. The docking space between the mandibles, all wrong. The previous Falcon suffered from the same awful, huge GAP. The cockpit isn’t quite right; it’s not better than the previous version, nor is it any worse, just a different design that’s still not quite there. You CAN sit two in the cockpit, not side by side, but rather one ahead of the other. Only by one stud and to the casual observer, it looks fine. Sticklers for an attention to detail won’t find it sufficient though. The way the cockpit attaches to the ship is quite weak and can easily be strengthened by replacing the two 1×2 sand blue grille tiles with two 1×2 tiles with center stud like on the other two contact points. I guess this was done to remove the cockpit easily to either put in or remove minifigs. Still too weak for my tastes.

I finished building the model late last night and have it sitting on my coffee table. After glancing at it this morning and casually looking at it, turning it, and messing around with it this evening. What’s my overall opinion? I must say, this is one of the best Star Wars model to date. The level of detail is outstanding and years ahead of the previous rendition of everyone’s favorite bucket of bolts… or bricks… If you’re like me, you like to tweak an official set to make it a little better. This Falcon provides an excellent base and starting point. A few homemade modifications can really turn this excellent model into an outstanding MOC.

Here are some photos that LEGO sent me awhile back: