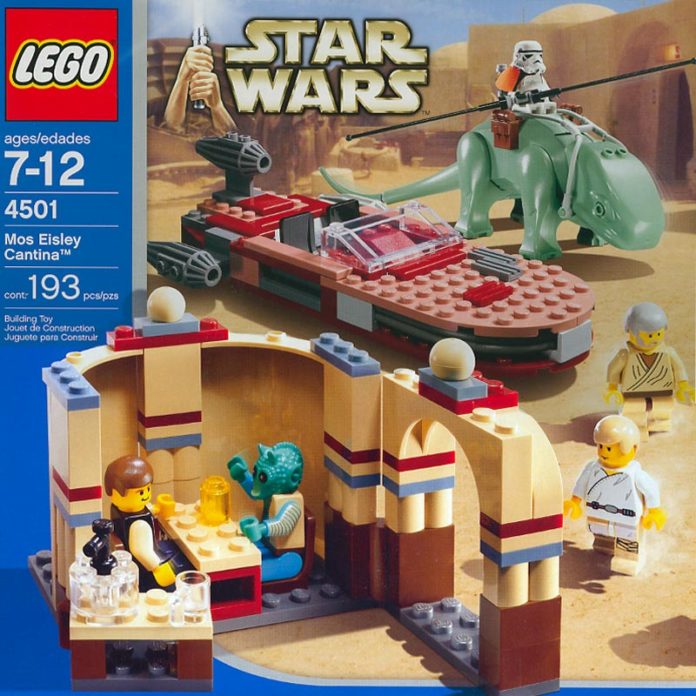 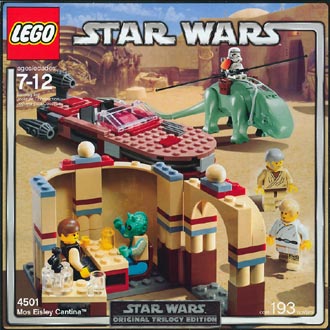 Ever buy a bag of chips and rip it open only to be disappointed because the bag was only a quarter of the way full? That’s kind of what you might expect when opening up the box of 4501 Mos Eisley Cantina. The vast expanse of empty space that echoes back at you isn’t the only disappointment either, the high price and the terrible price to parts ratio doesn’t exactly win any awards either.

MSRP of this set is $29.99 for a paltry 193 pieces. Terrible, just terrible. It’s hard to justify purchasing this set when you have 4507 Prehistoric Creatures sitting on the shelf right next to it. 719 pieces for the same price? Who wouldn’t want to get this set? LEGO should be ashamed for asking for so much money. But, like the mantra goes, you should never judge a book by it’s cover and you’d be making a slight mistake if you were only looking at the price.

Why does LEGO demand such a high price for this set? Two reasons immediately come to mind. The first being the awesome dewback you get. When LEGO released the dinosaurs a few years back, I hoped that a dewback creature would be made, that and a tauntaun. While a tuantaun still has yet to be realized in ABS form, the dewback is every bit as I had imagined. Body, legs, and tails were previously existing pieces from the dinosaur line. The dewback’s head is all new and captures the creature’s head shape quite well.

The second reason why this set is a bit pricey is Greedo. The rodian’s head is all new and quite, quite accurate. So with the dewback’s head and Greedo’s head requiring new molds, it is my educated guess that the reason why 4501 is so expensive is because of these awesome new pieces. They have limited use outside of the Star Wars theme and we’ll probably see them again in another set in the future to help offset the cost a bit more.

The cantina set you actually build is a complete joke. You get an arch, a table in an alcove, and table. That’s it. No bar, no Modal Nodes, no other aliens, nothing. I would be REALLY impressed if an actual cantina set is in the works to expand this fragment but we’ll just have to wait and see. One neat little feature is that the table that Han and Greedo sit at flips up to reveal a storage compartment for Han’s megaphone. The landspeeder continues this year’s theme of redesigns. It’s larger overall with a bit more detail than its predecessor. The rear engine flips back to reveal a storage compartment for Luke’s lightsaber. It’s a lot more movie accurate with it’s sand red color scheme instead of the older version’s tan color. Also, one of the engines is light grey while the other two are dark grey. Nice attention to detail.

There are a lot of LEGO Star Wars fans who are in it for the minifigs, and this is where 4501 really shines. You get a total of 5 minifgs. Luke is as he appeared in 7110 as is Ben Kenobi (although it is the opinion of this reviewer that Old Ben should have come with a brown hood and cape). You get Han with dark blue legs like he appeared in 7190 Millennium Falcon. You also get the bounty hunter Greedo and what an awesome fig he is. Simply one of the best. To finish this list, you also get a stormtrooper modified to be a sandtrooper. His orange pauldron is made from the same cloth as minifig jedi robes, but it totally works despite it not being a plastic piece.

Is this set worth getting? Completists really don’t need a reason to get this set. Minifig fans might balk at the price if they already own Luke, Ben, and Han. You get a cool dewback and the landspeeder is pretty nice. The cantina is a complete joke, should have been called Mos Eisley Broom Closet it’s so small. Overall, if you’re on a budget, you’re better spending your money elsewhere. It’s a tough call to recommend this set very highly. The few good points doesn’t compensate for the high price completely, so you stand a chance of being disappointed.

CORRECTION: It has been pointed out to me that the Han minifig you get with 7190 is has blue legs, and that the dark blue legged version you get in 4501 is exclusive to this set.