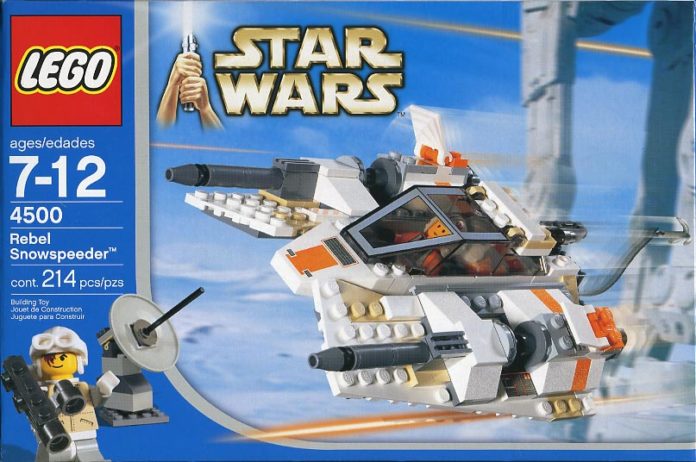 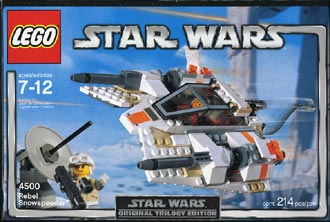 One of many redesigns to come out in 2004, I was a little leary of how a redesign of my favorite LEGO Star Wars set of all time would turn out. It’s no secret that the original wasn’t exactly “movie accurate”, but there was something magical about its design and construction that won over a lot of fans and converted the casual observer to a full-blown, hardcore LEGO Star Wars collector.

The most noticeable change in 4500 Rebel Snowspeeder isn’t the addition of the word “Rebel” in the title of the set, it’s the replacement of the original’s dominating grey color with white. General opinion is somewhat divided over the color; there are those who believe every single ship in the Star Wars universe is either grey or dark grey, and there are those who think the colors are more accurate and give the product line a better color pallette. No one outside of LEGO and Lucasfilm Licensing will ever really know the truth behind the color choices. It could have been a decision by Lucasfilm to have the snowspeeder white, or something that LEGO decided and that Lucasfilm approved. In any case, the product is LEGO and there isn’t any piece on the ship that you can’t find a grey replacement for if you’re really that unhappy with it’s clean look. Me personally, I built the model with both colors, one in white and one in grey, and really don’t mind either one. I replaced almost all of the white elements with grey ones. Unforunately, I didn’t have all the pieces in old grey or new grey, so it’s a mix of both.

Appearances aside, this model boasts a number of improvements. The original model featured two separate cockpits, one for the pilot and one for the tail gunner, each with it’s own working canopy. The redesign model is much more accurate in that department and features a single cockpit for both the pilot and the gunner. This design doesn’t come without a cost; trying to raise the canopy will more often than not lift the whole assembly away from the rear canopy. Therefore, you will have to hold down canopy roof while raising the windscreen.

Not much has changed with the pilot’s section of the cockpit. But now that the storage compartment has been eliminated, the only place i was able to fit Luke’s lightsaber was in the cockpit along the panel elements that make up the cockpit wall. Though not as fun as the removable storage locker, it’s not a dealbreaker for me. As long as I can store the lightsaber somewhere in the model, I’m happy.

The tail gunner section features a number of improvements. The 2×2 turntable has been replaced with a 2×2 round plate. A black camera element now inserts into the technic pin hole in the 2×2 round plate. I am pretty sure this change was made so that the tail gun wouldn’t turn uncontrollably when swooshing the ship. There is now a grappling hook that with some gentle pressure can be inserted into the end of the camera element. The grappling hook is tied to the string which is tied to a winch. A 5 length Technic axle attaches a Technic gear to the winch assembly which is truly baffling and quite ugly. I replaced mine with a 3 length axle to bring the gear right up to the winch and it works just fine and looks a LOT better. There is now an exhaust grill at the rear of the craft to keep up the movie-accurate appearance.

The original model’s nose section had two 2×2 corner slope bricks that are gone in this model. Instead, the wings feature some angle plates to try and recreate the unique shape of the nose. Working in such a small scale, I’d say the designers were pretty successful in achieving that shape.

The cannons and engine thrusters have been completey reworked. There are no longer any of the signature Star Wars cannon elements that were so prevalent in the early releases of the product line. The new cannon array is much more detailed than the previous and the thrusters couldn’t be any better. What was simply a 1×1 round brick has now been replaced with a 1×1 round brick with fins. May not sound like a huge difference but the 1×1 round brick with fins adds some bulk and balances well against the engine.

One thing I have unsuccessfully tried to do with the previous model was to add control flaps onto the underside of the wings. I hoped that the redesign would address this bit of detail but, like the original version, there are none present. A project for another day I suppose.

In this set, you get Luke, his tail gunner, Dack Ralter, and a Hoth Trooper. Luke and Dack are exactly the same as they appeared in 7130. The Hoth Trooper sports one change and that is white goggles in place of the brown visor. Personally, I really dug the brown visor. The goggles may be more accurate but i think the visor just looked cooler.

There is an antenna array… or gun turrett or whatever it’s supposed to be. It seems so inconsequential to the fun factor of this set that I’m not even sure if it’s any different from the original.

When the AT-AT was released last year, the general line of thinking was, why release an AT-AT without snowspeeders? LEGO was caught in a predicament. If LEGO released nothing, people would complain about not having anything to battle the AT-AT’s. If they re-released 7130, people would complain about LEGO not releasing anything new. They were damned if they did, and they were damned if they didn’t. We’re a fickle bucnh aren’t we? I think 4500 Rebel Snowspeeder solved that problem… for the most part anyway. People still complained about not having anything new, but the redesign is so fantastically accurate and FUN, even if you do own the original, you should pick up at least one of these. It’s a GREAT model, much more accurate which is something I can appreciate. Despite the canopy issue, this is one of the best sets LEGO has produced.

I drew a lot of comparisons in this review against the original 7130 release and for good reason. 7130 set a standard that, for me, all other sets are measured against. But you shouldn’t feel compelled to go out and secure yourself a copy of 7130 unless you have that completist blood in you. 4500 is a fantastic model that every fan should own whether or not their collection already includes 7130. And the fact that LEGO released the set in spiffy new Original Trilogy Edition packaging, you really don’t have any reason to not own this set.