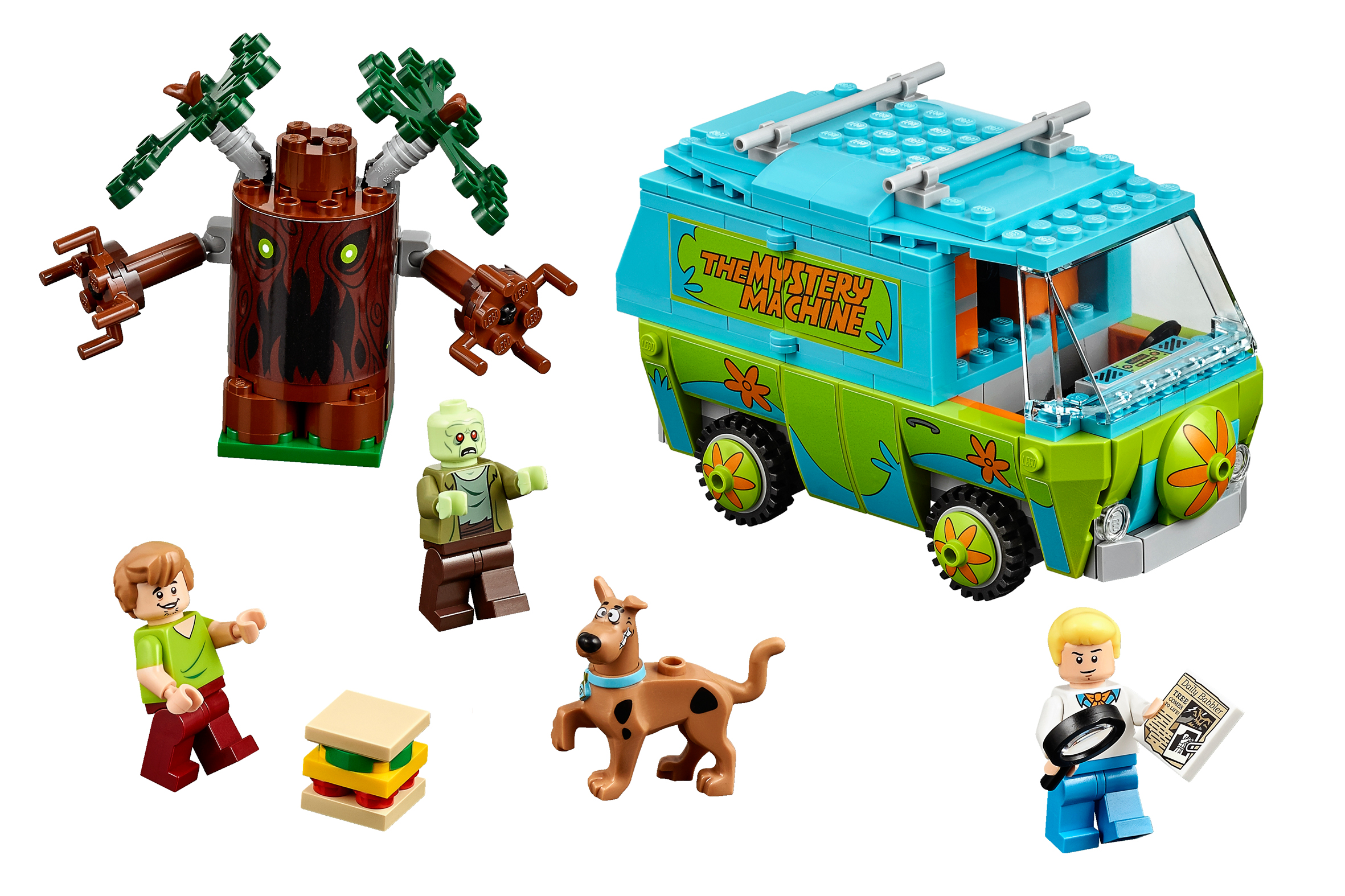 If the theme’s appearance at the London Toy Fair wasn’t official enough, it’s now official official. The LEGO Group announces Scooby-Doo as their latest license. Below is the full press release sent to me this morning. 75902 The Mystery Machine, pictured above, will run you $29.99 and has 301 pieces. The full line of Scooby-Doo sets will be at the New York Toy Fair coming up in just a couple of weeks. FBTB will be there providing full coverage as usual.

LONDON, BRITISH TOY AND HOBBY ASSOCIATION TOY FAIR (January 23, 2015) â€“ The LEGO Group today announced its partnership with Warner Bros. Consumer Products to develop a collection of LEGOÂ® building sets inspired by the timeless and beloved animated franchise, Scooby-Doo™. Five new building sets will bring the zaniness of classic characters including Shaggy, Scooby and the entire gang to life in LEGO form for the first time ever, and are scheduled to hit store shelves in August.

In another first, the Scooby Gang will be animated in LEGO form. In 2015, fans can look forward to a 22-minute LEGO special, featuring Scooby-Doo, and produced in partnership with Warner Bros. Animation. In addition, Warner Bros. Animation will also be producing made-for-video movie titles, which will be released by Warner Bros. Home Entertainment in the coming years.

â€œFans always wonder which properties may come to life in LEGO form, and this year we are thrilled to bring all of the mystery, humor and hijinks of the Scooby-Doo universe to life in LEGO toys and animated content,â€ said

Jill Wilfert, vice president, licensing & entertainment at The LEGO Group. â€œWe constantly review properties to find those with global reach, great characters and stories and inherent building and role play opportunities, and we think that Scooby-Doo delivers on all of these while also driving strong appeal among collectors and todayâ€™s parents who have strong nostalgia for the LEGO brand from their own childhood.â€

â€œScooby-Doo and his whole Gang are known and loved by kids and adults alike around the world and we are proud to partner with LEGO Group to continue to entertain new generations of fans and bring everyoneâ€™s favorite Great Dane to the unique interactive world of LEGO play,â€ said Karen McTier, executive vice president, Domestic Licensing and Worldwide Marketing, WBCP.

â€œAs animators, we always aim to find fun and inventive ways to connect with the audience and tell new stories with our characters,â€ said Sam Register, president, Warner Bros. Animation and Warner Digital Series. â€œScooby-Doo and LEGO fans share so much affection for the characters and the brand, and we are so pleased to finally bring these two worlds together.â€

LEGO Scooby-Doo Products
Fans will instantly recognize all of their favorite Scooby-Doo characters and icons, including Scooby, Shaggy, Fred, Daphne, Velma and the Mystery Machine, as well as all the ghosts, goblins and other villains that make Scooby-Doo adventures complete in sets such as the Mummy Museum Mystery, the Haunted Lighthouse and the Mystery Mansion. LEGO Scooby-Doo products range from $14.99 to $89.99 (USD) and will be available in toy stores nationwide beginning in August.

About Scooby-Doo
Scooby-Doo is one of the few classic properties to maintain top on-air ratings across the globe and is consistently ranked as one of the top properties in the Warner Bros. Consumer Products licensing portfolio. Scooby-Doo is the only dog with human characteristics who can live and play in a kid’s real and imaginative world. Scooby loves to solve mysteries, is hip and cool and makes ‘spooky’ fun; he truly is the dog that can Doo it all!

About The LEGO Group
The LEGO Group is a privately held, family-owned company, based in Billund, Denmark. It was founded in 1932 and today the group is one of the world’s leading manufacturers of play materials for children. The company is committed to the development of children’s creative and imaginative abilities through its products, which can be purchased in more than 130 countries. Visit www.LEGO.com

About Warner Bros. Animation
Warner Bros. Animation (WBA) is one of the leading producers of animation in the entertainment industry, producing and developing both CG and traditionally animated projects for multiple platforms, both domestically and internationally. For TV, WBA produces series such as Teen Titans Go!, The Tom and Jerry Show and the upcoming Be Cool Scooby-Doo! and Wabbit â€“ A Looney Tunes Production for Cartoon Network, as well as Mike Tyson Mysteries for Cartoon Networkâ€™s Adult Swim. As the home of the iconic animated characters from the DC Comics, Hanna-Barbera, MGM and Looney Tunes libraries, WBA also produces highly successful animated films â€” including the DC Universe Animated Original Movies â€” for DVD. One of the most-honored animation studios in history, WBA has won six Academy AwardsÂ®, 35 EmmyÂ® Awards, the George Foster Peabody Award, an Environmental Media Award, a Parentsâ€™ Choice Award, the HUMANITAS Prize, two Prism Awards and 20 Annie Awards (honoring excellence in animation).

About Warner Bros. Home Entertainment
Warner Bros. Home Entertainment (WBHE) brings together Warner Bros. Entertainment’s home video, digital distribution, interactive entertainment, technical operations and anti-piracy businesses in order to maximize current and next-generation distribution scenarios. An industry leader since its inception, WBHE oversees the global distribution of content through packaged goods (Blu-ray Disc™ and DVD) and digital media in the form of electronic sell-through and video-on-demand via cable, satellite, online and mobile channels, and is a significant developer and publisher for console and online video game titles worldwide. WBHE distributes its product through third party retail partners and licensees, as well as directly to consumers through WBShop.com

SCOOBY-DOO and all characters and elements are trademarks of and Â© Hanna-Barbera.

Save 30% On The Mystery Machine