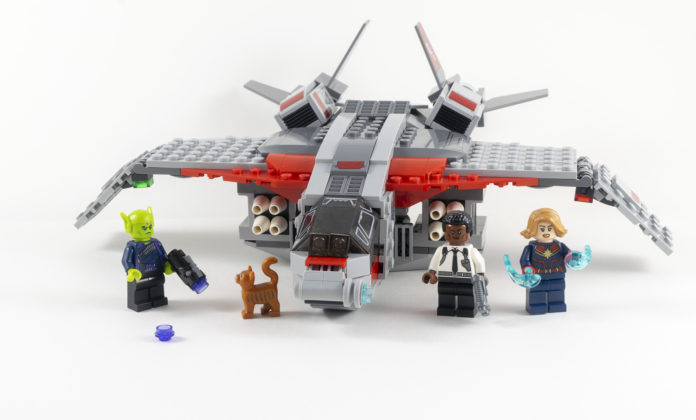 Captain Marvel has been out for a few weeks now, making money and annoying a relatively small but annoying vocal group of trolls on the internet. It’s the 7th MCU movie to cross $1 billion worldwide (all three Avengers movies, Black Panther, Captain America: Civil War, and for some reason, Iron Man 3, are the others on the list), and outside of said minority was generally enjoyed.

There will be some light spoilers in the review, but I’ll try to avoid some of the bigger things that would come into it (seriously, go see the movie if you haven’t yet). My own mini review is that I quite liked it, but what I really loved is the potential of what comes next. It’s an origin story, and I wasn’t the main target for the movie (and that’s absolutely fine), but I found it fun and entertaining.

I’ve mentioned before that Carol Danvers / Captain Marvel / Ms. Marvel (I also love the current Ms. Marvel) is my favorite Marvel superhero, when I reviewed 76049 Avenjet Space Mission. I really enjoyed that set, even though it was one of the last LEGO sets that I purchased, since it included some new characters and was a big enough diversion from the sixty-four other Quinjets that we’ve gotten with this line to be worth it.

Of course, that set weighed in at $60, while this new one, which has, yes, yet another QuinJet variant… is going for half of that at $29.99 US. That’s… odd. I got out of collecting LEGO because I was tired at prices always going up and up and up. Obviously, we get less stuff in the set, only three minifigures plus a “cat,” but it’s in line with what most people would think of for a set that range. Better yet is that the minifigs are all unique to the set, with one completely new and two MCU versions of the characters.

In that minifig lineup, we get Carol Danvers (who, technically, is never explicitly named Captain Marvel directly… sort of; you need to watch to see what I mean), a younger Nick Fury when he was still in the field, our Skrull friend Talos, and Goose the cat. 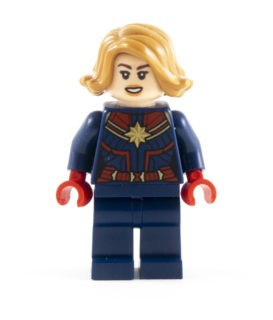 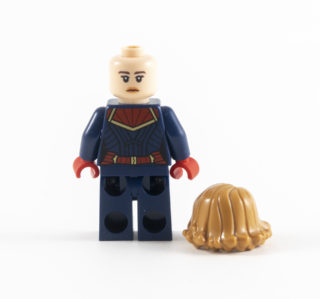 It’s strange, but the Carol figure is probably the weakest figure in the lineup. She’s the title character, and was the absolute focus of the movie… but we mostly get rehashed parts for the figure itself. The hair is a color variation on Black Widow’s hair (which has been reused on a lot of other figures). The face is Kira from Solo (I know that’s not how it’s spelled, I don’t care… their spelling is stupid), so I assume they just reused them because those sets were meh. The legs are unprinted and the torso is new… but also kind of a step back from the original figure. 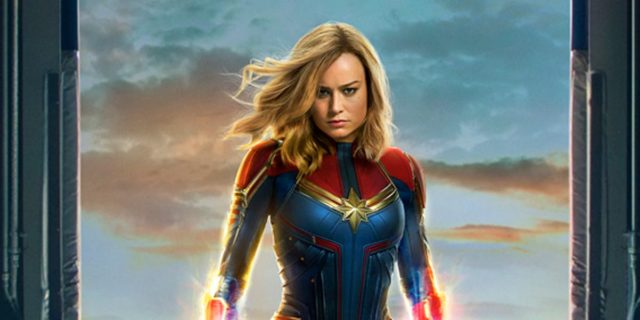 The costume is okay for the end of the movie… but she doesn’t turn it blue / red until towards the end. Prior to that, it would have made far more sense to be in the green variation of one of the Kree soldiers. It’s the hair, though, that really bugs me. I get that they design these sets based on limited information and production stills… but Brie Larson has had blonde hair around the movie (she’s gone with other colors in the past) and Captain Marvel is blond in the movie and comics. There’s got to be a color setting for blond that isn’t medium orange. 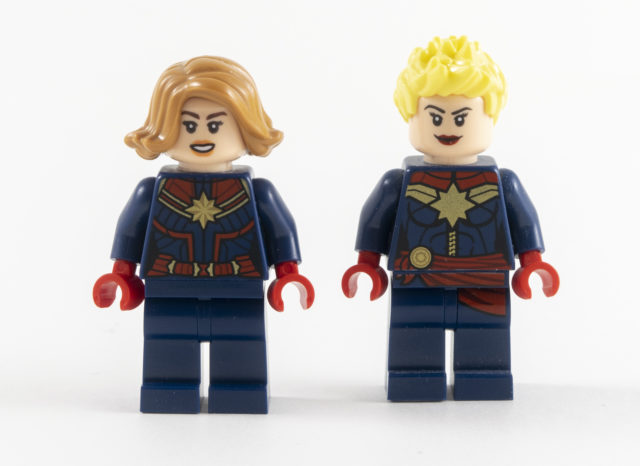 Compared to the other character, which has more of the traditional comic look (and was clearly the inspiration here), and I think better color balancing. The MCU one has a much better look of armor, matching what we see, and a better use of the Hala star. I think what I really wanted is more printing on the legs and arms to extend the costume a bit. 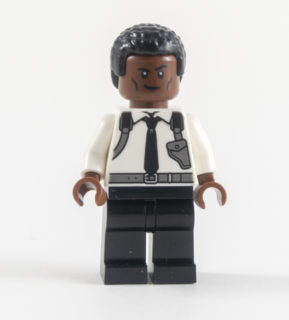 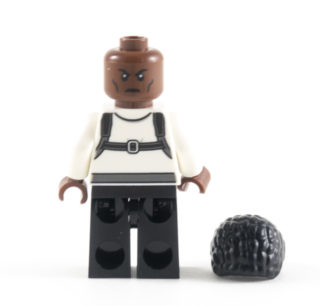 Like I said, I really liked the movie, but I think Samuel L. Jackson as a young Nick Fury is worth the price of the ticket alone. If for nothing else, the scene where he sings is just great. But there’s also the fact that there is some serious voodoo technology at use here, and he and Larson had fantastic chemistry on screen. The figure is a great variation from the other figure we have for the older fury. I also like that the face look is annoyed and angry… though I would have loved to see an alternate face that was just the angry face again. LEGO isn’t known for doing nice little jokes like that, though… 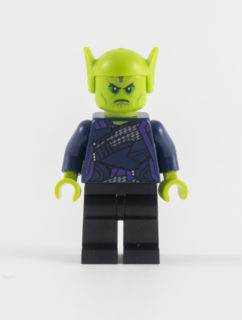 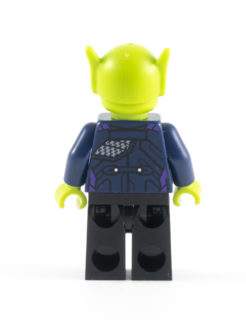 Talos is our last figure, and he’s solid as a Skrull. It’s a shame that there aren’t any other sets coming out for the movie, because I would have paid another $5 for this set to get Science Guy in the set, and it’s pretty generic overall (as fitting the costume). The only real quibble here is the lack of an alternate face, since Ben Mendelsohn was able to act way through the makeup and gave us a lot of variety in the movie.

There is a lot of missed opportunity with the minifigs here, but that’s more a function of the price and lack of other sets. There are several other characters that could have showed up, and sets that could have been made (Yon-Rogg, Minn-Erva for the Kree… Maria or Dr. Lawson for Earth, etc… the aforementioned Science Guy). 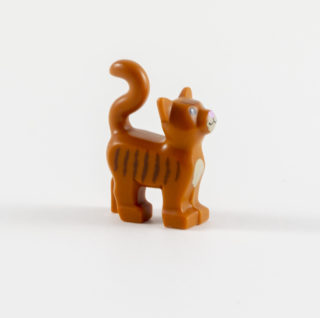 We get Goose the “cat” here as well, so now we have an orange tabby. Fun fact… Brie Larson is actually super-allergic to cats, so in her scenes it’s supposedly a CGI or puppet cat. 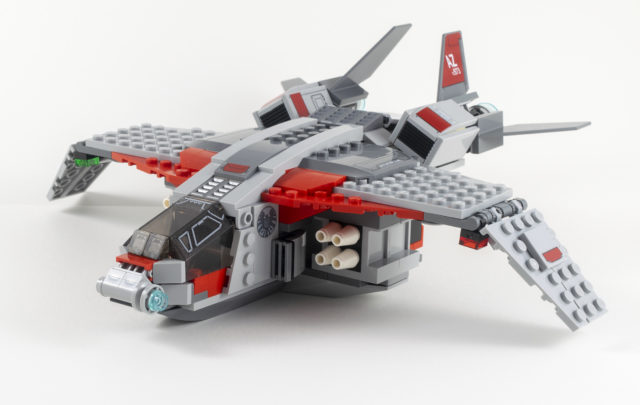 Even though LEGO sets anymore (sadly) are mostly about the minifigs, the proto-Quinjet here is a fun little build. It is supremely swooshable, something that’s often overlooked in sets anymore, and has a decent balance of the newer jets, but compact down to something smaller. 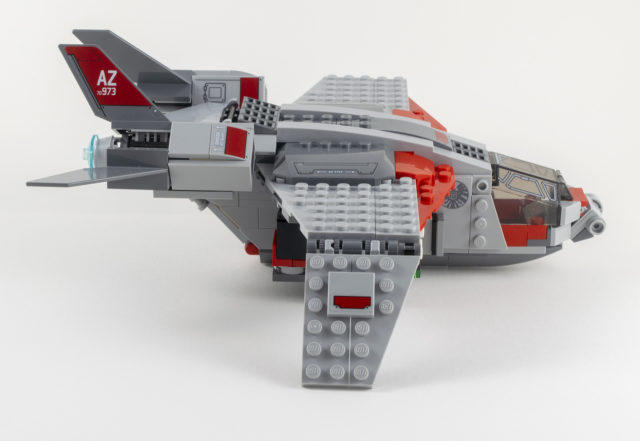 Of course, the trade-off here is that the jet in the movie is the size of the normal Quinjet we see later (I guess Stark Industries has been making them for awhile)… so clearly they had to cram a lot in. Small quibble based on the movie, but likely something LEGO just assumed… but this jet isn’t a SHIELD aircraft. I won’t go into who it really belongs to, but it’s a small bit of background lore that weaves through several MCU movies.

The play features on the set are pretty slight. That back panel opens, but there’s no room to do anything in there. The front cockpit seats only one (and it really needed to seat two, with seating behind), so you’re only getting one minifig in the whole of the ship.

As a vehicle, it’s just fine, if a little bit “LEGO-d” up. In the movie, the quinjet eventually gets some weapons (or a weapon), but it wasn’t quite like this. From a practical point of view… it was never in a battle with the Skrulls; it was used as a transport and an escape craft. The issue I have is that putting the missles, and that complexity, into the build really detracts from the rest of the ship.

Like most flick-fire mechanisms, it ends up being a really long walk for a little bit. Half of the bulk of the middle of the jet goes into these things, and the flick fires go… maybe 6 inches. Even from a play perspective, its underwhelming, and it feels like all those parts could have gone to better stuff.

Still, as a set it’s solid and stout… and that extends to the whole set. I’m not going to knock off points on this set because it’s the only one we’re going to get (unfortunately), and even with the “I wish this was…” on the minifigs, you still get a lot of value in what amounts to the bottom range for sets. I’m going to give this thing a pretty solidÂ four out of five, but like its predecessor.

Even though I can’t find any sort of confirmation, and it’s not marked as Hard to Find on Shop@Home, I’m pretty sure this is a Target Exclusive in the US… so you can get it there, or better yet, for those sweet VIP points, through LEGO Shop@Home (which also helps support the site). 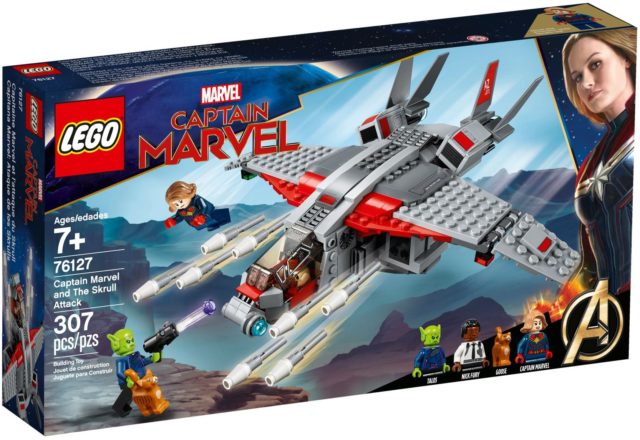