I’m starting this review a few days before the second Guardians of the Galaxy movie comes out; I’m excited, I have tickets to a double-header with the first in IMAX on Thursday. The first GotG movie represents something very unique in the Super Hero genre; a genre I really enjoy, but is starting to show a few problems. The Marvel movies, which are all entertaining, are very formulaic. The look and appearance of the movies themselves has become somewhat bland. Marvel tends to stick to flat colors and taking off brightness… giving Cap a dull blue suit, making Spider-Man less shiny looking, darker colors for Doctor Strange, etc.Â DC goes sepia and covers everything in grit; suicide squad made Harley colorful, but everything else was gray and brown with an extra helping of grit and dust.

Guardians of the Galaxy has been bucking all of those trends; it’s absurdly colorful. It mixes humor and action more effectively than any other comic book movie not named Deadpool. More than that, it proved that you can tell a comic book story with an ensemble cast, without diving deeply into origin stories, and make us care about them in a two hour runtime. I’m just saying, it’s perfectly okay to choke up a bit when you hear “We Are Groot.” Guardians of the Galaxy was supposed to be the first “failure” in the MCU, back when it was first released, but it ended up being one of the best, if not the best, we’ve gotten.

The verdict on LEGO sets is a bit more mixed. The first line only consisted of a few sets and a polybag… but it gave us one of the best spaceship/jets in the first Milano set (I still maintain it’s named after Alyssa Milano and not the cookies). It also gave us a good set with a Nova, and a… not good prison break set. Still, it was great to get the major players from the first movie, even if we still need an official Glenn Close minifigure, and that Milano wasÂ fantastic. For the sequel, LEGO seems to be sticking to their most recent trend of “let’s just rehash the old stuff, but make it worse and raise the price a bit.” Thus far, I’ve only picked up one set for review,Â 76079 Ravager Attack, and that is mostly because I wanted a Mantis minifigure. Here’s hoping that this little $19.99 and 197 piece manages to impress a bit more when built than it does in the first impression.

I’ve been working on an article for some time about LEGO… are they in some sort of creative drought, or have they just given up on making quality sets for the most part? Certain lines are doing incredible things… the LEGO Batman Movie, their original stuff like the Modular Buildings and Ideas, the new Ninjago movie sets. There are scattering of really great sets in there, but for the most part, especially for our break and butter like Star Wars, Super Heroes, and other licensed themes, we’ve been getting a bucket of awful, lazy, and rehashed sets. It’s not just the repeats, it’s that so many features in the sets just lookÂ awful. Sizes being off, ugly build techniques, and just ugly ships in general. Did LEGO lose a bunch of the design team (or are they just doing original stuff), or is it all being done by a computer at this point? Who knows. 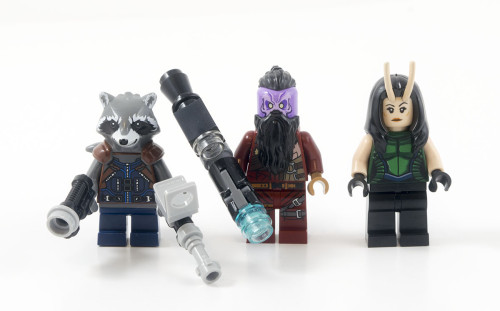 We get three minifigures in the set; an updated version of the still far too large Rocket, the new villain from the Ravagers named Taserface, and a new addition from the Cosmic / GotG canon in Mantis. Three minifigures, two new and one redone, is always nice to see in one of the cheaper sets. More than that, I’m glad Mantis wasn’t tucked away in one of the most expensive sets. She’s a pretty cool character in the comics.

Rocket’s only real change isÂ color. Otherwise, he’s mostly unchanged and still, way,Â way, too big. I was hoping they could come up with a solution for these figures at this point, but it seems like it’s a problem LEGO isn’t interested in solving. The size of the head, combined with the standoff for the tail, make him nearly as tall as a regular minifigure.

The tail still feel like it’sÂ going to break on any sort of play use. Mine have been sitting on a shelf, so it’s fine, but I’d be curious if anyone else has seen problems with the part.Â At least the legs and torso seem to be fairly reusable for other applications. 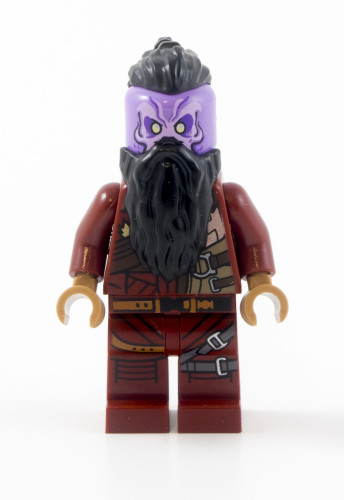 TaserfaceÂ is a new Ravager, the good/bad guys from the first movie that Peter was once part of. I know nothing about him, and when I opened up his wiki page it said there were spoilers, so I stopped reading. I’m a bit curious about the name, given that “Taser” is a brand name, not a product (also a type of sailboat, but I think in context we can assume it’s the stun gun). On the other hand, that sounds exactly like the name Star-Lord would give someone. I like the hair here, because it can be used in a whole lot of varieties, and black beards are somewhat rare. 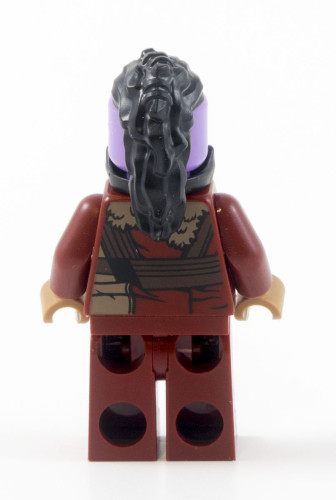 I’d need to check the other sets with Ravagers to see if this is a generic uniform or not, but I haven’t bought them and I’m too lazy to do some googlin’. Not bad, but they’re pretty meh, just like they were in the first Guardians of the Galaxy movie. I mean, how many people even knew the red outfits were Ravager outfits in that movie? 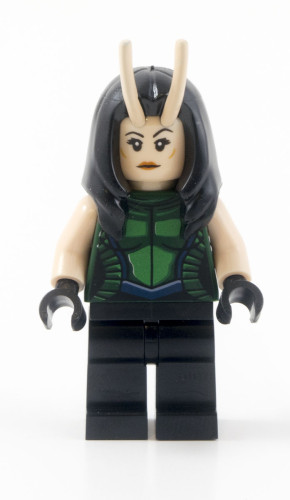 Mantis is one of the weirder characters in the Marvel universe… and this is a universe that includes Spider-Ham and Thor as several different types of animals. In the comics, she’s either a human, a bug, or a plant. Sometimes, it’s all of those things. She’s a telepath, sometimes, and an empath, most of the time, and on at least one occasion set Groot on fire with her brain. She’s been a pacifist before, and also a martial arts master. In short, she’s even more messy than your average comic book hero, but she’s also usually mixed up with this weird sense of innocence that makes her fun to see in stories. 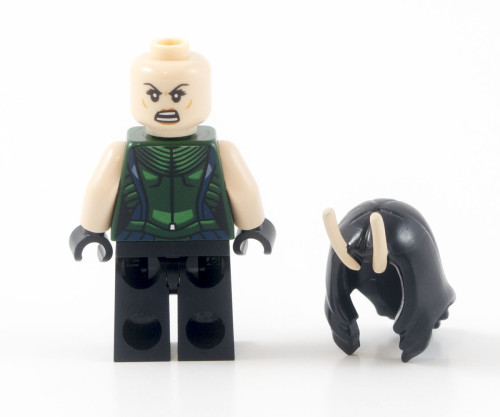 The figure isn’t bad, but I’m really wondering about the angry alt-face (that doesn’t fit the more modern version of the character). Much like Rocket’s tail, the antennae feel flimsy like they could break off, and are something to keep an eye on. The torso is pretty great for reuse, since there aren’t any symbols or insignias, and I could see it pop up in several different applications. How well the character works, much like with Taserface, I’ll have to come back to after I see the movie. 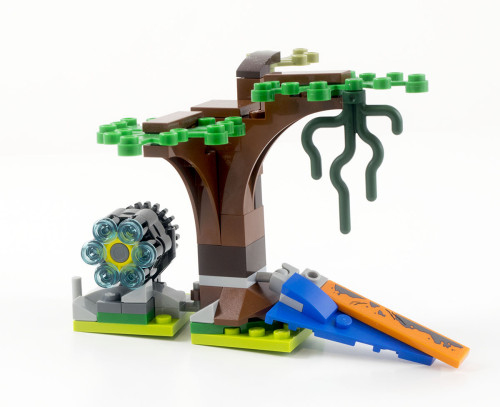 I’m not certain if this is the best or worst part of the set. I mean, the gun is very Rocket, so that’s cool. The tree is very “typical LEGO filler” which is bad. The chunk of what looks to be the Milano is spoilery, which is… bad, maybe. It’s hard to tell with these things since this set could have zero basis in the movie outside of some production stills. Attaching a mixel socket for the wreckage just seems stupid, so that’s bad. 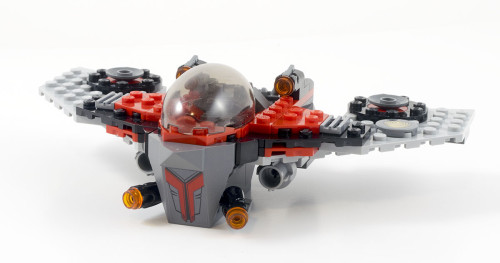 The biggest problem I’d had with LEGO sets lately is that they often feel like something that either I build as a way to capture a shape before I make it look better or the kind of build I made back when I was just starting out and didn’t understand build complexities. That’s not to say I’m a great MOC builder. I’m not, but I also know that stacking a few plates and calling it a day doesn’t really fly. This set looks very circa 2001 LEGO; that isn’t automatically bad… Benny’s Spaceship showed us that tapping into that nostalgia can really work for a build, but when all the sets start doing that, I’m left wondering what the point is.

Pictures do too much justice to this build, because as you’re putting it together, it feels like you’re missing 2/3rds of a ship. I made a joke about a frisbee above because until you attach that slope blob on the bottom, this thing feels like a flat plate. There is just so little to like about this build, and that’s really the biggest problem with that tree. Take those parts and build up a little bit better ship. I know I haven’t seen the movie, but there is a style for those ships and this just doesn’t feel like it matches what we’d seen before. It’s ugly, boring, and lazy. 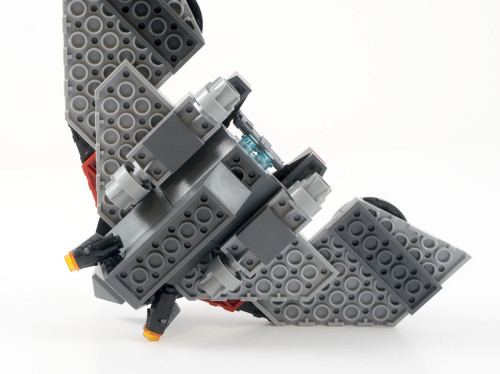 Even the use of stud-shooter blasters in place of launchers here hurts the ship (the brick versions on top make a lot more sense). I made a joke in chat that this thing isn’t even half-*bleep*, it is at best a quarter. That may be generous. In my own private head-canon, I imagine the design going something like “well, that’s a good first pass, I’m going to get a sandwich” and then the guy coming back to discover that his first draft was submitted and accepted. Of course, that’s giving the designer the benefit of the doubt (mostly because I want to love those guys, they make the toy we love)… but I’m not sure based on what feels like the majority of new sets.

I’m left in a real quandry about the set. It’s only $19.99 in the US, so it’s far on the inexpensive side. It has Mantis, which is great, along with one of the new bad guys. It doesn’t feel like you’re getting ripped off at the price, really, but there’s also nothing at all to get excited about outside of Mantis. The set is boring at best, disappointing at worst. Everything I’ve heard about the movie is that its great, but the sets don’t seem to do it any justice. This is an unfortunate trend for what has come before, and based on some leaked pictures, what is coming later for Thor and Justice League. I’m not certain LEGO is even trying on these sets any more, and just releasing them as filler for a box with a minifig in them. That underwhelming nature has me calling this aÂ two out of five. Mantis isn’t going to improve what is a very forgettable build.

Verdict: 2 out of 5. You can, if you feel so inclined, buyÂ 76079 Ravager Attack and the rest of the Guardians of the Galaxy vol. 2 LEGO sets at Amazon.com. You might want a good discount first to feel better about it, and as of this writing, it’s rocking a 20% off one. 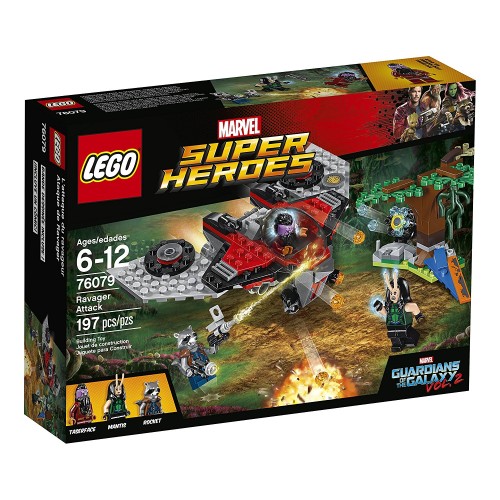