The Internet rumor-mill has been going crazy lately for everything around the Marvel Cinematic Universe. If you’re like me, and try to live in an information bubble for movie’s you’re excited for, don’t go below the fold. If you’re a realist like me, and know that the internet has made said bubbles impossible, keep reading.

First, we get the final trailer for Age of Ultron, which hits theaters on May 1st. It’s pretty much impossible to not be excited for this movie, or the fact that seemingly everyone is using Cap’s shield. Also, I’d suggest never playing racquetball with Thor.

We also got conformation of whoÂ Gholum is playing in this movie: Ulysses Klaw (or Klaue, as it was in the character descriptions). It’s likely his part is a lead-up for Black Panther (as was always rumored based on the early looks), as Klaw is a major villain there. I’m holding out that somehow Namor gets pulled into the mix, bexcause the whole T’challa/Namor in the recent Avengers stuff has been incredibly dark and good to read.

Looking even further into the future, today we get another rumor confirmed in that the Russo brothers as directors for Avengers Infinity War parts I & II. They are the people that gave us Captain America:Â The Winter Soldier, which is arguably the best of the MCU movies (Avengers and Guardians can be called “more entertaining,” but the Captain America movies are the better crafted films).

Hopefully it’s still based more on the Infinity Gauntlet, because that’s still my all-time favorite, and not the follow-up Infinity War series (better name, worse story). I’m not saying I’m a big fan of Thanos or the Infinity series, but I will be wearing this to the theater when I see these: 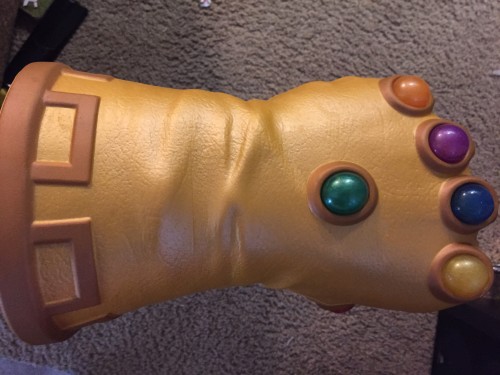 I will admit that it’s pretty hard to type with, but looks awesome.

Last up, in case you didn’t know how you were going to spend your weekend, Marvel’s first foray into the binge-streaming world is now here. Daredevil drops this Friday on Netflix, and looks to be a very legit addition to the MCU (plus, anything that gets usÂ closer to Luke Cage and Jessica Jones is awesome). This joins on to a much-stronger Agents of S.H.I.E.L.D. in giving our fix between movies.

While I don’t think that Affleck’s Daredevil was all that bad (and his portrayal of the character certainly wasn’t the worst thing in the movie… especially the director’s cut), this show looks to be better on almost every front. Now all we need are some sets and minifigures based on all of this stuff. I mean, I’m not saying that I’dÂ like if LEGO released a CMF line for Marvel figures and upped the price to $4 or $5… but I’m also not saying I wouldn’t buy every one I saw.