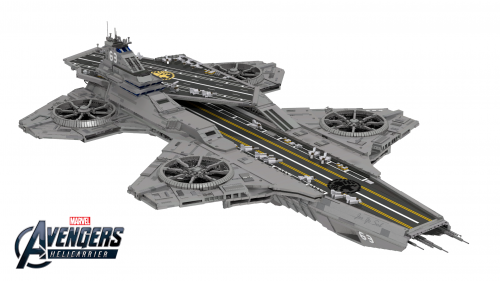 Looks like we have another 10k supporters on an Ideas model, this time, the massive S.H.I.E.L.D Helicarrier by YoSub Do. It is a hugely impressive model, but I know I’m not alone that this set is never, ever, going to be made. Outside of the absurdly high piece count (22,694) and the fact that the ship wasn’t actually built, it was created in LDD which means that it’s ignoring that pesky nemesis gravity… it’s just not the kind of set that Ideas has ever been interested in producing. Anyone here interested in dropping two or three grand on any one LEGO set? They’re not interested in making $100 sets out of some strong products

I would have loved to see an official LEGO Helicarrier, but I think it’s probably safe to assume that particular vehicle has been played out in the MCU. I’m also skeptical that Marvel, for all it’s exposure, has the kind of power that Star Wars has to justify huge sets like even a vastly scaled down helicarrier would be. UCS is a risky proposition for LEGO if it wasn’t also pulling in the Star Wars fans. Other big sets haven’t traditionally fared as well, and lingered or languished.

It’s one of those things that bothers me about Ideas… these builds would be awesome but so many times it’s more like demanding that science get around to cloning Unicorns. Just a wee bit unrealistic in expectations.Â Congrats to YoSub for getting the support, though. It’s a lot harder now, and there’s obviously a lot of people that like it.