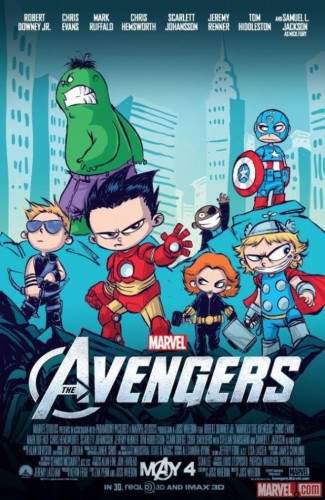 At last year’s San Diego Comic Con, Marvel was selling pre-orders for their Avengers ultimate 10-disc box set and as an incentive, you received this awesome poster. Plans fell through on that box set, and it was released much later than the expected date. Now, if you’re headed to Comic Con, and are a fan of Skottie Young, and want to purchase Phase One of Marvel’s Cinematic Universe on Blu-ray in a 6-disc set, then this deal may be for you. Mr. Young has created the above poster and Marvel is including it as an incentive if you purchase the box set at the Marvel booth. Price is $150 for everything. On a side note, Amazon is selling that amazing 10-disc limited edition set

which includes Blu-ray copies of the film in the special case with the Tesseract for $155. Don’t know what other goodies are included in the SDCC 2013 version, but we’ll see. More info below:

Bring home a piece of cinema history with Phase One of the Marvel Cinematic Universe on Blu-Ray! This collectorâ€™s set includes all six Avengerâ€™s films from Phase One and other amazing collectibles. But wait, there’s more. As a special exclusive ONLY AVAILABLE at the San Diego convention, we are also including a limited edition theatrical homage poster as a special gift with purchase for anyone who buys the Box Set at the Marvel booth. This limited-run poster (production run of 350 posters), is illustrated by Skottie Young and and hand-numbered. Not only that, but Skottie Young will be on hand during preview night signing these super rare posters! Price: $150.00