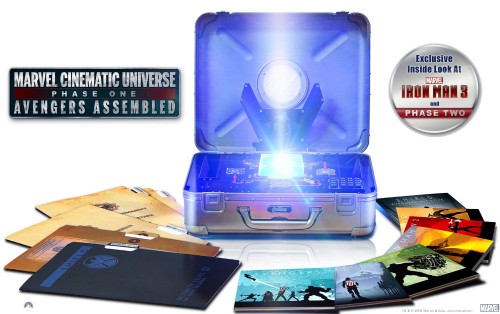 The 10-disc set above was set for a holiday release last year when Rimowa, the company that makes the suitcase, filed a suit against Marvel for illegal usage. They were okay with Marvel using it on-screen as Nick Fury carries the Teserac Cube in it; but they weren’t okay with Marvel selling a replica case for the 10-disc set. Either Marvel and Rimowa came to a licensing agreement or Marvel created a new case that was similar but different enough for the suit to go away. In either case, I just got a notice that Amazon has started shipping that 10-disc set to people who kept their pre-orders which I can’t imagine was a whole lot of people. In order to entice you to consider buying it, they are throwing in a sneak peek at the next movie in the next phase of the Marvel Cinematic Universe, Iron Man 3. I’m pretty sure everything in the case is intact, so to summarize, here’s what you get in the set:

Plus all the other goodies we previewed before. The official release date for the shelf spacer taker upper is April 2.