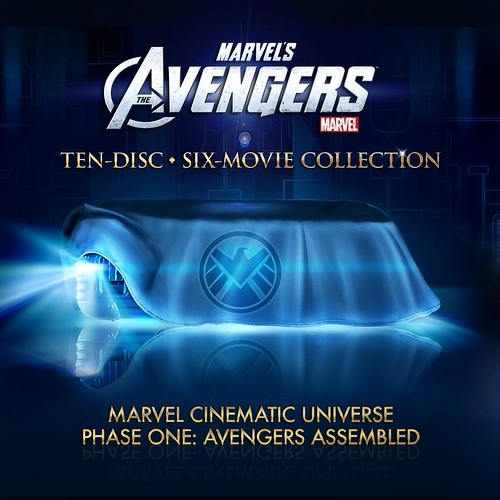 While I’m still basking in the afterglow from watching the Avengers movie, I was surprised to find out a few days ago that some details for the DVD sets have been “released”. Most of the details have been gleaned from Amazon.com so I’ll just summarize the key points here for you along with their current pre-order price. And if you pre-order now, you’re guaranteed the lowest price should it drop any further between the time you order and the time it ships, which is rumored to be around September 25th.

First up is your basic single disc DVD edition of the movie which will net you the audio commentary by director Joss Whedon and a featurette titled “Assembling the Ultimate Team”. Pre-order price is $20.99. Marvel’s The Avengers

Next is a 2-disc Blu-ray/DVD combo package in two flavors: DVD packaging

(blue). Both are currently priced at $27.99 and will also net you the same bare bones bonuses.

The 4-disc set is where things get interesting. You get the movie on Blu-ray 3D, Blu-ray, DVD, and also a digital copy. The possible list of bonuses include:

And finally, for those of us that need to splurge on the biggest and the baddest, there is a 10-disc, 6-movie collection containing Iron Man, Iron Man 2, The Incredible Hulk, Thor, Captain America: The First Avenger, and, of course, Avengers. I have no idea what else is in this monstrous set. I would imagine more details will be release on or around July 11th when San Diego Comic Con kicks off later this year. The price for this set? MSRP looks to be $219 if Amazon is to be believed, but the current pre-order price will set you back $153.30. Marvel Cinematic Universe: Phase One – Avengers Assembled (10-Disc Limited Edition Six-Movie Collector’s Set) [Blu-ray]