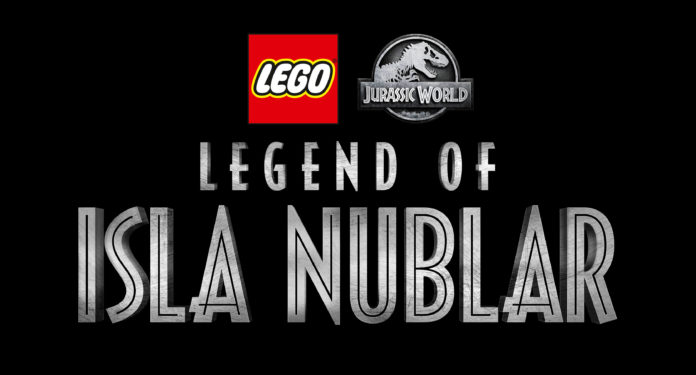 There’s more LEGO Jurassic World sets headed our way. Based on a new partnership with Universal Brand Development, a new 13-epsisode animated mini series, LEGO Jurassic World: Legend of Isla Nublar, is in the works as a follow-up to the 2018 specials, LEGO Jurassic World: The Secret Exhibit. Four new sets will hit the shelves later this year in the fall. They are below along with the official press release way down below.

75934 Dilophosaurus on the Loose 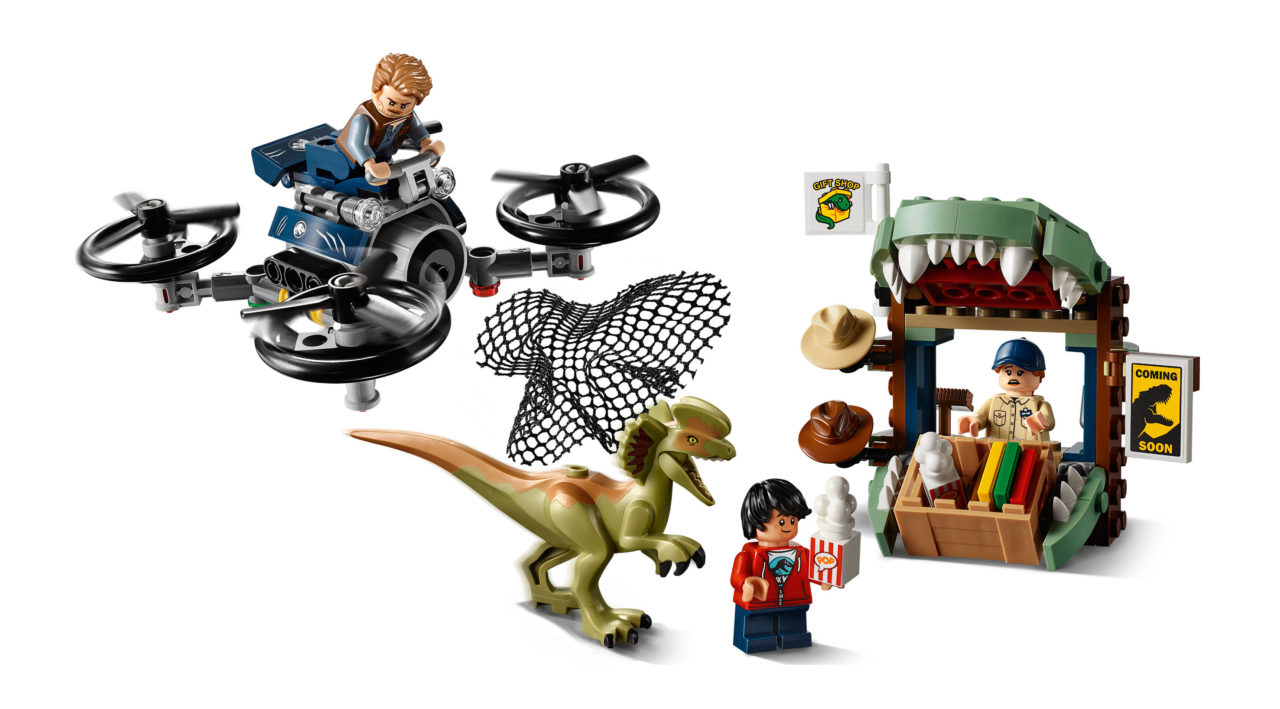 Thrilling adventures await children when they construct Owen Grady’s drone and fly to save Hudson Harper from an escaped dinosaur in LEGO® Jurassic World 75934 Dilophosaurus on the Loose. The drone features 4 spinning rotors and a net shooter function to aim at the Dilophosaurus dinosaur model. This building toy for kids also includes 3 minifigures, plus a market stall in the shape of a dinosaur’s head with lots of accessory elements to inspire creative play. 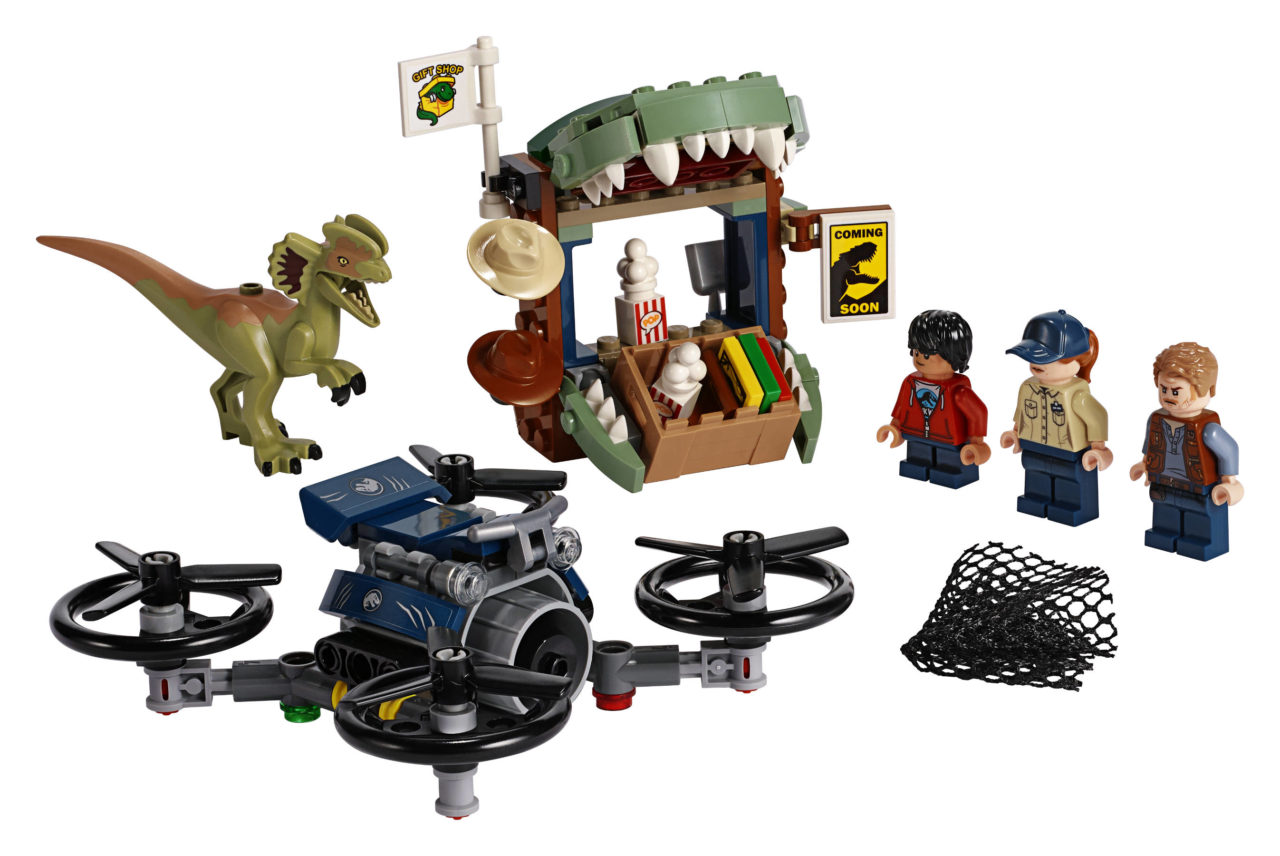 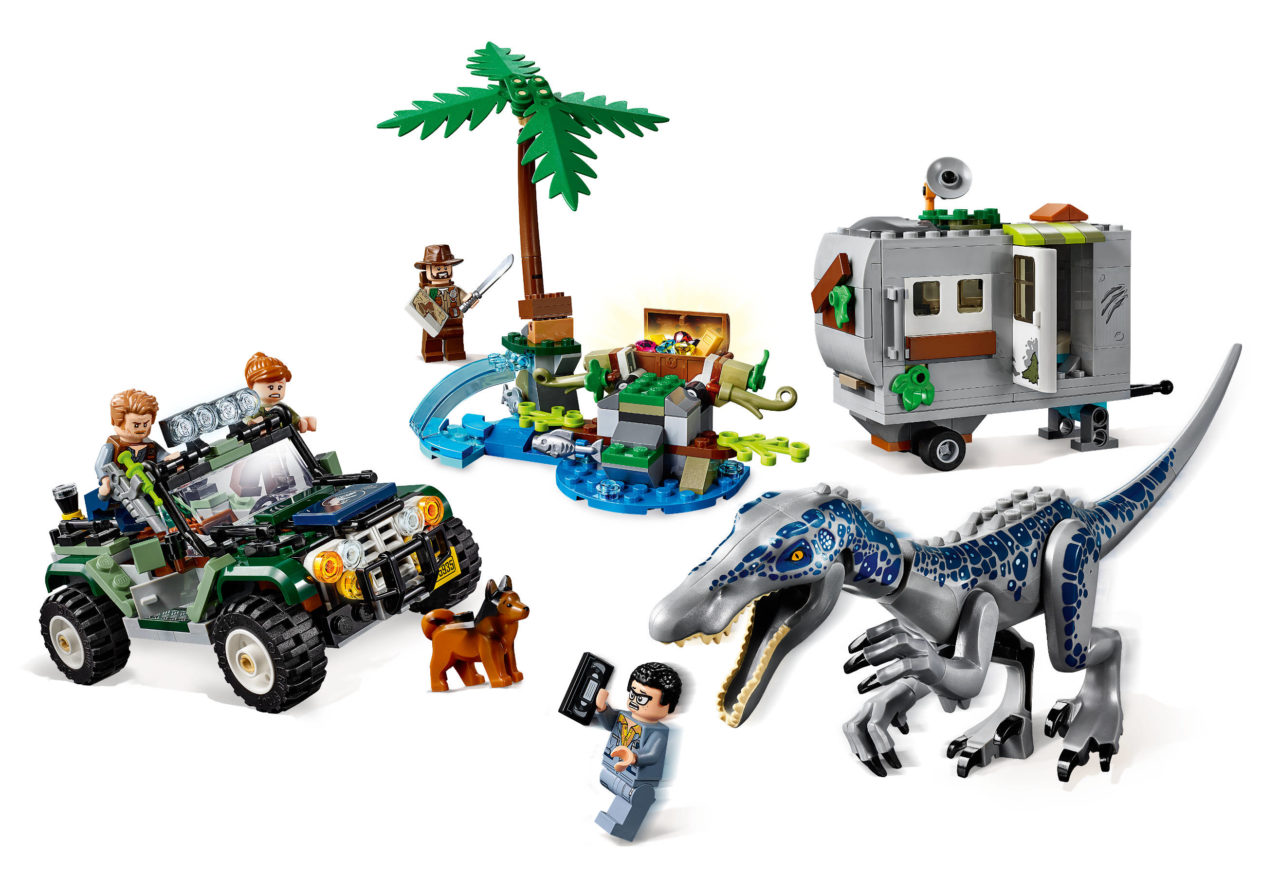 Drama awaits kids as they help Owen Grady and Claire Dearing pursue bad guys through the jungle in LEGO® Jurassic World 75935 Baryonyx Face-Off: The Treasure Hunt. This action-packed dinosaur playset features an offroader with space for 2 minifigures and an attachment point for a trailer which has a buildable rooftop antenna and a detailed interior, plus a buildable jungle scene that has a hidden treasure chest with a reveal function. It also includes a posable Baryoynx dinosaur figure and 4 minifigures with cool weapons and accessories to inspire imaginative play. 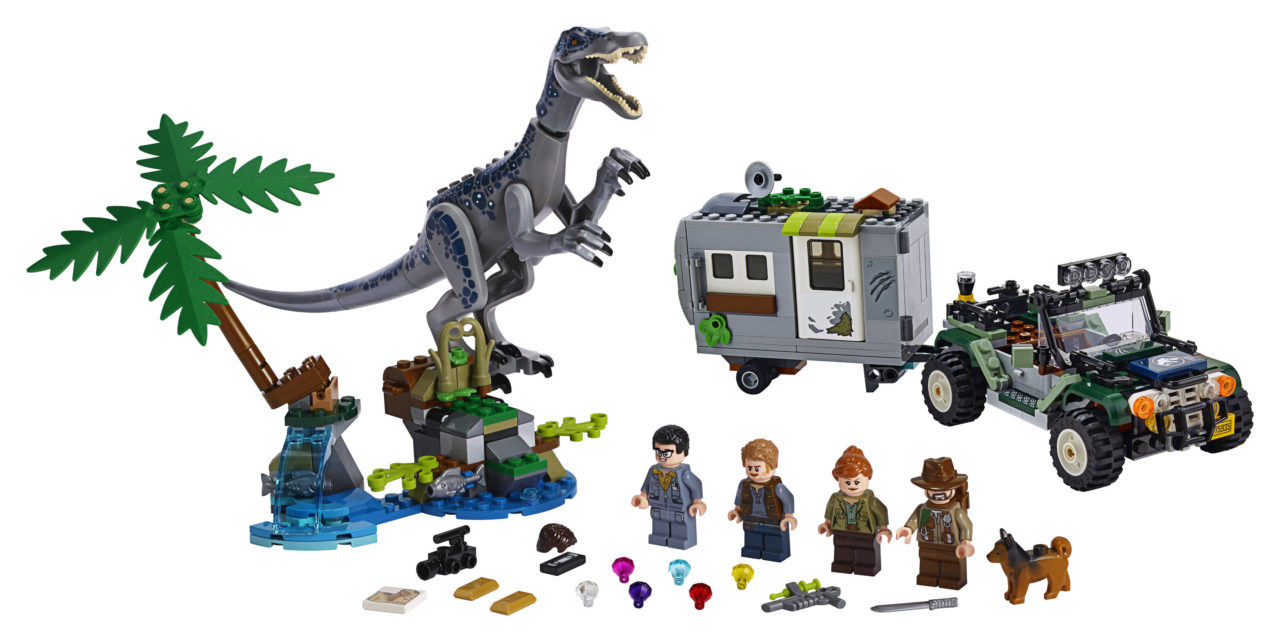 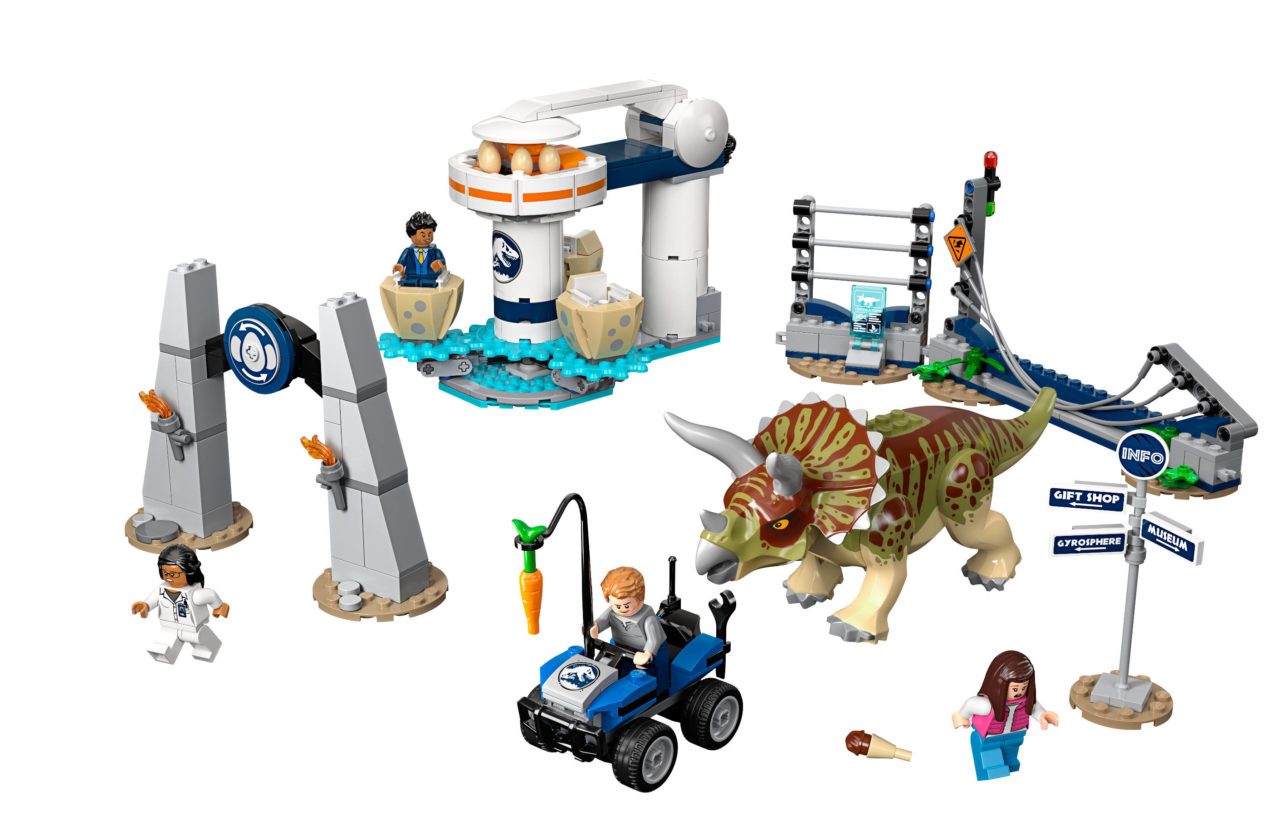 Youngsters will love creating exciting dinosaur action adventures with this LEGO® Jurassic World 75937 Triceratops Rampage building set. The colorful playset includes an Egg Spinner ride with 3 dinosaur-egg seats for minifigures and a spinning function, plus a gate and queuing area for the ride. There is also a posable Triceratops toy dinosaur figure, a collapsible fence ­and a minifigure buggy to play out a dinosaur escape and pursuit.  This building toy for kids includes 4 Jurassic World minifigures to inspire creative role-play. 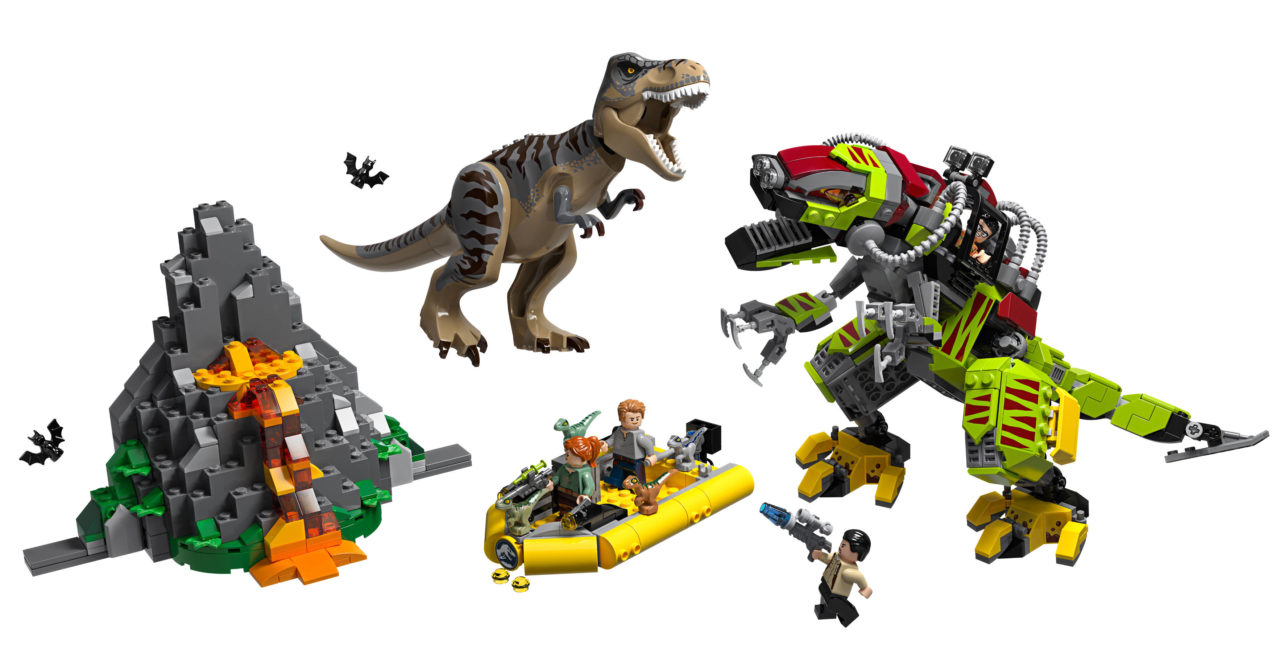 Action-packed dinosaur adventures are guaranteed as youngsters play out a LEGO® Jurassic World 75938 T. rex vs Dino-Mech Battle and seek hidden treasure in the Isla Nublar volcano. The buildable T. rex toy dinosaur figure and bad guy Danny Nedemeyer’s Dino-Mech are both posable and have snapping jaws, while the buildable volcanic rock has an opening function to reveal a hidden treasure chest. This Jurassic World building toy also includes 4 minifigures, 4 baby velociraptor toy figures and a boat with 2 stud shooters and a tranquilizer gun to inspire kids to role-play Jurassic World scenes and create their own stories.

Set in 2012, three years before the events of the Jurassic World movie, LEGO Jurassic World: Legend of Isla Nublar picks up where the story left off from LEGO Jurassic World: The Secret Exhibit. Newly hired animal behaviorist Owen Grady and Assistant Manager of Park Operations Claire Dearing team up on Isla Nublar to deal with everything the Jurassic World park throws their way. And “everything” includes runaway dinosaurs, ongoing construction to expand the park, tourists everywhere, unpredictable tropical weather, and an impulsive boss! Plus, a mysterious saboteur with surprising ties to the park’s past is on a quest to find a legendary treasure and destroy Jurassic World forever! What could possibly go wrong? Everything.

“The box office and retail success of 2018 proved Jurassic World is the definitive dinosaur brand,” said Vince Klaseus, president of Universal Brand Development. “This year we’re focused on continuing to expand the Jurassic World story through always-on content and new experiences for fans of all ages. Our partnership with the LEGO Group allows us to do just that and more.”

Building on the success of the 2018 LEGO Jurassic World offering, the LEGO Group will globally launch four building sets that take the storytelling and role play opportunity beyond the blockbuster film year, giving fans the chance to bring new adventures, characters and dinosaurs home for even more play. The sets will hit shelves this fall, and are displayed in the LEGO booth #1335 in Hall 3B of the Jacob K. Javits Convention Center from February 16-19.

“Jurassic World is one of those properties that just works so well in LEGO form,” said Jill Wilfert, vice president, licensing & entertainment for LEGO Group. “The theme and stories appeal to kids and adults at the same time, and with this content, we offer a fun and unique twist by adding LEGO creativity and humor to an evergreen property. We’re thrilled to expand our successful partnership with Universal to introduce more original LEGO Jurassic World stories that will inspire imaginations and continued play.”

Revealed for the first time today, four building sets based on LEGO Jurassic World: Legend of Isla Nublar include:

75934 – Dilophosaurus on the Loose
Explore LEGO Jurassic World with Owen Grady and build his drone to look after the dinosaurs. Meet Hudson Harper, a kid who knows everything there is to know about dinosaurs. And build the market stall in the shape of a dinosaur head with LEGO bricks. But look out—a young Dilophosaurus has escaped and is creeping up behind Hudson. Fly to the rescue with Owen’s drone, fire the net shooter and capture that dinosaur. Every day is an adventure with this action-packed LEGO playset!
Ages 6+, 168 pieces, $19.99 (USD)

75935 Baryonyx Face-Off: The Treasure Hunt
Rush to stop Danny Nedermeyer and Sinjin Prescott’s dangerous treasure hunt in LEGO Jurassic World! According to legend, there is treasure hidden on Isla Nublar and Danny and Sinjin have a map and old video tape to help them find it. But when a Baryonyx dinosaur thinks they are trying to steal her fish, they have to hide out in an old trailer. Help Owen Grady and Claire Dearing fix up the offroad buggy. Then drive with them and Red the dog to catch the bad guys before they steal the treasure!
Ages 7+, 434 pieces, $59.99 (USD)

75937 – Triceratops Rampage
Take a ride on the awesome new LEGO Jurassic World Egg Spinner with Simon Masrani and Allison Miles! Then check the sign for directions to Jurassic World’s gyrosphere. But, watch out—-there’s been a power failure and the mighty Triceratops has smashed through the fence and escaped! Jump in the buggy with Owen Grady and speed to the rescue. Dangle a carrot in front of the mighty dinosaur to distract it and save the tourist. There’s never a dull day in Jurassic World park!
Ages 7+, 447 pieces, $59.99 (USD)

75938 – T. rex vs Dino-Mech Battle
Danger! Danny Nedermeyer is roaming Jurassic World park in his huge Dino-Mech on a mission to steal the treasure hidden in the Isla Nublar volcano. But first he has to face the mighty T. rex. Jump in the boat with Owen Grady, Claire Dearing, Vic Hoskins—plus baby Velociraptors Blue, Delta, Echo and Charlie—and speed to the battle scene. Fire the boat’s stud shooters at the Dino-Mech. Put the T. rex to sleep with the tranquilizer gun. You must stop Danny before he finds a way to smash into the volcanic rock and steal the treasure!
Ages 8+, 716 pieces, $89.99 (USD)

Build an Army of Pteranodons, Dewbacks, and Aragogs for 40% Off