Update: Forgot to include the official press release. It’s posted at the bottom. Two things I gleaned from the press release are that there will be a Walmart-exclusive BrickHeadz set, and both TRU and Walmart will get retailer-exclusive sets.

Bring on the DUPLO dinosaurs!

Three product reveals across three different age groups were shared by LEGO today for the upcoming Jurassic World release: 75928 Blue’s Helicopter Pursuit for System, 10758 T. rex Breakout for Juniors, and 10880 T. rex Tower for DUPLO.  I would consider this a spoiler-free post, but based on the DUPLO set, if Owen isn’t riding the back of a T-rex in the movie, I’m going to be disappointed.

Pictures and pricing below. All Jurassic World LEGO sets have a street date of April 16th, 2018.

$39.99 | 397 pieces | Ages 7+
Builders can unite Owen with his lead Velociraptor in this set designed for fans, ages seven and up. The set includes a quadbike, helicopter, featuring rotating blades and dual searchlights. The set also includes three minifigures: Owen, Wheatley and a pilot, plus Blue, the Velociraptor. 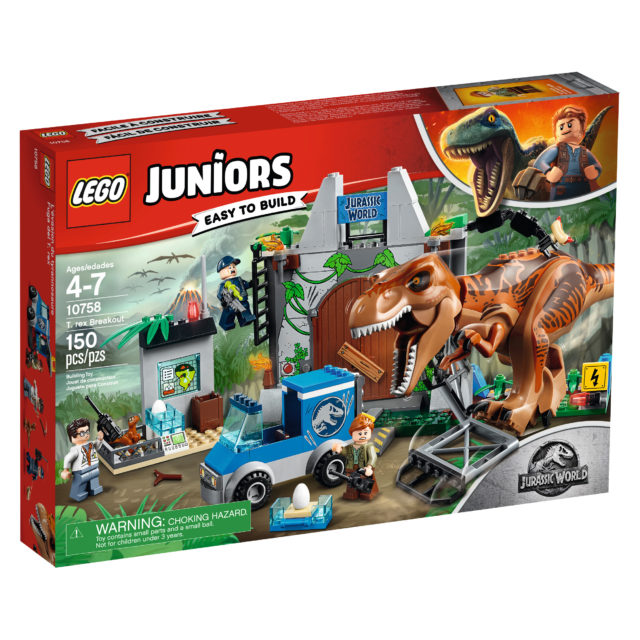 $49.99 | 150 pieces | Ages 4+
Children as young as four can play along and build a posable T. rex, opening gate and a truck with Quick Start chassis. This LEGO Juniors set includes easier building instructions and quick start elements as well as three minifigures and a baby dinosaur figure.

$29.99 | 22 pieces | Ages 2+
This new LEGO DUPLO set is suitable for builders, ages two and older. This easy-to-build dinosaur features large building bricks and is great for creating endless role-play stories! Toddlers and their parents can build this set together, which features a T. rex with opening jaw, revolving lookout tower, car and an Owen LEGO® DUPLO® figure.

NUREMBERG, GERMANY. – January 30, 2018 – Universal Brand Development (Universal) and the LEGO Group announced today the launch of their largest Jurassic World partnership to date, offering an expanded line of construction sets, all-new animated content, and, for the first time ever, a lifestyle collection. In anticipation of the upcoming global theatrical release of Jurassic World: Fallen Kingdom in June, Universal is building upon the success of LEGO Jurassic World, with the debut of construction sets that span every LEGO age category, as well as two all-new, animated videos, and a collection of soft lines and publishing to reach audiences beyond the toy aisle.

“Fans embraced LEGO Jurassic World with our initial product launch, and we couldn’t wait to come back and give them more of what they love with new ways to play and new opportunities to interact with the brand,” said Vince Klaseus, President of Universal Brand Development. “The expansion of our partnership reflects Universal’s objective to create lifestyle programs and engaging fan experiences that reach every age category, 365 days-a-year.”

In support of the theatrical launch of Jurassic World: Fallen Kingdom, Universal and the LEGO Group will globally launch 13 constructions sets that span across the various LEGO® play categories: LEGO Systems (ages 6+), LEGO Juniors (ages 4-7) and LEGO DUPLO (ages 2-4), plus a collectability offering with LEGO BrickHeadz, available this spring only at Walmart. The sets will hit shelves in April, with retailer exclusives at both Toys “R” Us and Walmart. Additionally, fans will find new soft line and publishing offerings available later this year. .

“We are thrilled to be expanding on our long-standing partnership with Universal in 2018. This year will bring a wide assortment of LEGO construction sets, collectables, licensed apparel and animated content, all based on Jurassic World: Fallen Kingdom,” said Jill Wilfert, Vice President of Inbound Licensing and Entertainment for the LEGO Group. “Jurassic World is an iconic property that appeals to both adults who grew up with the property and to their kids who have embraced this world with the new films. The team at Universal has a strong long-term plan in place that will continue to build the property globally, and we are excited to give LEGO builders of all ages even more options when it comes to playing with Owen, Claire and the iconic dinosaurs like Blue in LEGO form.”

Revealed for the first time today, a selection of the LEGO Jurassic World: Fallen Kingdom sets fans can look forward to seeing at retail include the below. More sets and information will be unveiled at New York Toy Fair in mid-February.

LEGO Blue’s Helicopter Pursuit- Builders can unite Owen with his lead Velociraptor in this set designed for fans, ages seven and up. The set includes a quadbike, helicopter, featuring rotating blades and dual searchlights. The set also includes three minifigures: Owen, Wheatley and a pilot, plus Blue, the Velociraptor.

LEGO Juniors T. rex Breakout- Children as young as four can play along and build a posable T. rex, opening gate and a truck with Quick Start chassis. This LEGO Juniors set includes easier building instructions and quick start elements as well as three minifigures and a baby dinosaur figure.

LEGO DUPLO T. rex Tower- This new LEGO DUPLO set is suitable for builders, ages two and older. This easy-to-build dinosaur features large building bricks and is great for creating endless role-play stories! Toddlers and their parents can build this set together, which features a T. rex with opening jaw, revolving lookout tower, car and an Owen LEGO® DUPLO® figure.

About Jurassic World: Fallen Kingdom
It’s been four years since theme park and luxury resort Jurassic World was destroyed by dinosaurs out of containment. Isla Nublar now sits abandoned by humans while the surviving dinosaurs fend for themselves in the jungles.

When the island’s dormant volcano begins roaring to life, Owen (Chris Pratt) and Claire (Bryce Dallas Howard) mount a campaign to rescue the remaining dinosaurs from this extinction-level event. Owen is driven to find Blue, his lead raptor who’s still missing in the wild, and Claire has grown a respect for these creatures she now makes her mission. Arriving on the unstable island as lava begins raining down, their expedition uncovers a conspiracy that could return our entire planet to a perilous order not seen since prehistoric times.

With all of the wonder, adventure and thrills synonymous with one of the most popular and successful series in cinema history, this all-new motion-picture event sees the return of favorite characters and dinosaurs—along with new breeds more awe-inspiring and terrifying than ever before. Welcome to Jurassic World: Fallen Kingdom.

Directed by J.A. Bayona (The Impossible), the epic action-adventure is written by Jurassic World’s director, Trevorrow, and its co-writer, Derek Connolly. Producers Frank Marshall and Pat Crowley once again partner with Spielberg and Trevorrow in leading the filmmakers for this stunning installment. Belén Atienza joins the team as a producer. www.jurassicworld.com

About The LEGO Group
The LEGO Group is a privately held, family-owned company with headquarters in Billund, Denmark, and main offices in Enfield, USA, London, UK., Shanghai, China, and Singapore. Founded in 1932 by Ole Kirk Kristiansen, and based on the iconic LEGO® brick, it is one of the world’s leading manufacturers of play materials.

Guided by the company spirit: “Only the best is good enough”, the company is committed to the development of children and aims to inspire and develop the builders of tomorrow through creative play and learning. LEGO products are sold worldwide and can be virtually explored at www.LEGO.com.

For more news from the LEGO Group, information about our financial performance and responsibility engagement, please visit http://www.LEGO.com/aboutus.

Build an Army of Pteranodons, Dewbacks, and Aragogs for 40% Off