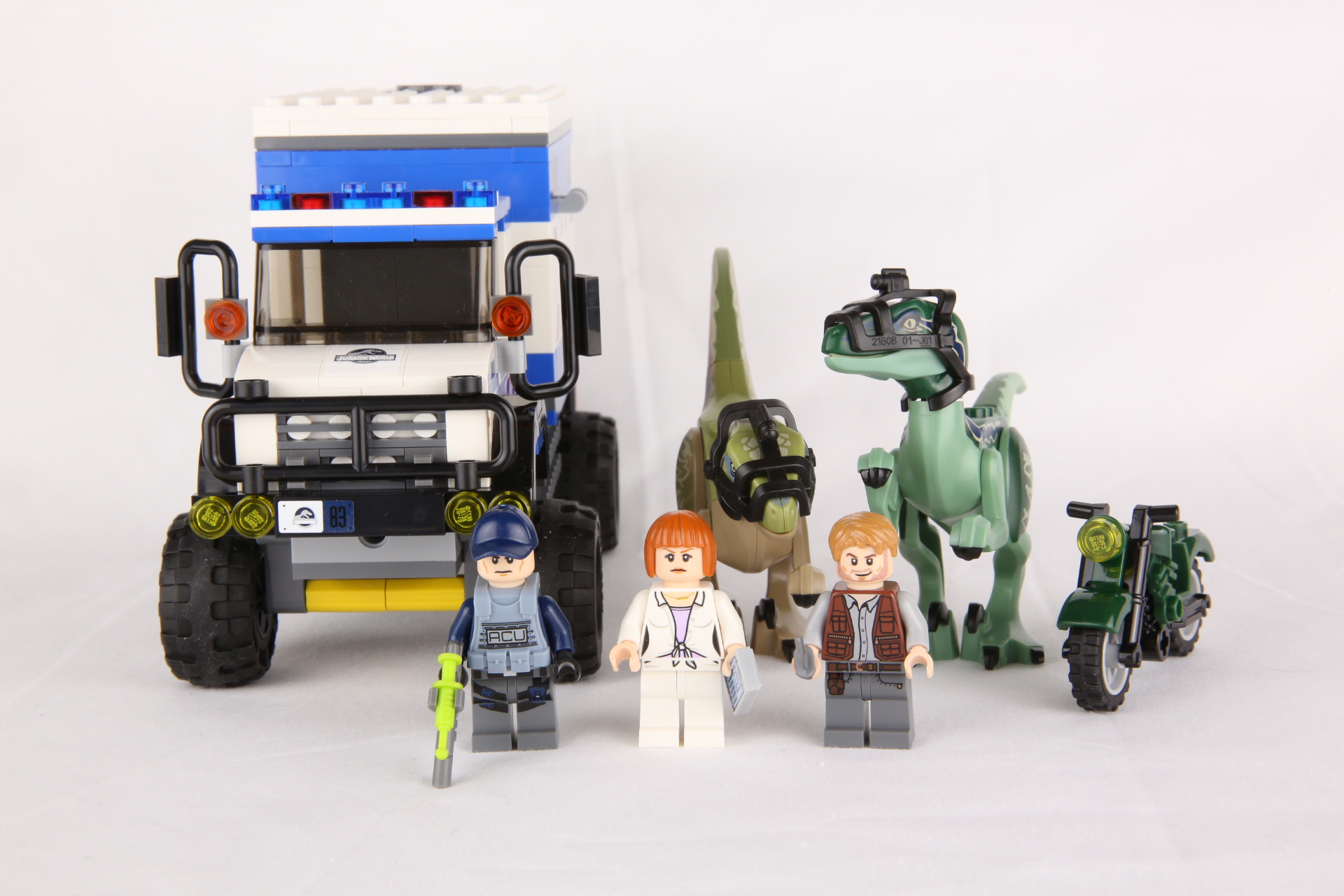 Four reviews in and so far all of the Jurassic World sets are average to less than average on the review scale. Will 75917 Raptor Rampage be the one that stands out from the crowd of mediocrity?

I’m going to do this set a favor and not criticize it too harshly for its lack of screen accuracy. Sadly, that is the trend with the majority of LEGO’s licensed sets across just about every theme. 75917 Raptor Rampage certainly includes a lot of key elements of the scene it’s based on, and the parts that don’t belong are put there for playability sake. And unlike 75915 Pteranodon Capture, the included non-canon features don’t detract from the final build too badly. 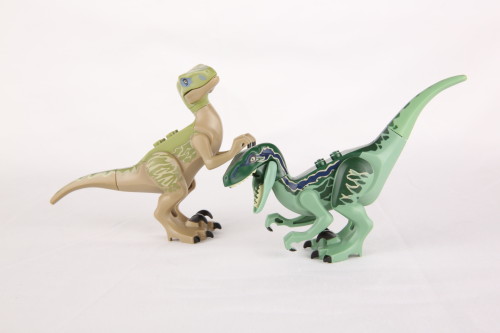 I’ll just say right off the bat that I liked this set for two reasons: Blue and Charlie. Yes, the two velociraptors. I totally dig them because the velociraptors are, after all, the real stars of Jurassic World. As bad as that movie was, seeing the raptors in action almost made up for all the bad acting, dialog, and anything else that involved a human. I didn’t think I would enjoy their LEGO counterparts as much as I do but for some inexplicable reason, I love’em. I love picking them up and making throaty raptor sounds while chasing the kids around the house or terrorizing the dog with them. You can put them in a variety of poses with the only limitation being that they can’t tilt their head up and down, just swivel them from side to side. Their hands are glorified clips which allows them to carry or hang onto bar-type elements. More on that later. 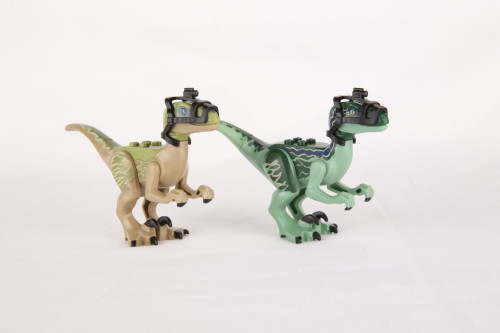 They come with a head harness that simply clips around the neck and rests on top of the head. +1 for accuracy as these things were what the military used to mount cameras onto the raptors. They don’t get in the way of the mouth opening so you can still have Charlie bear his teeth at you. 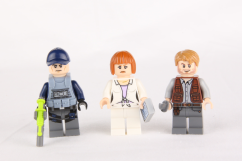 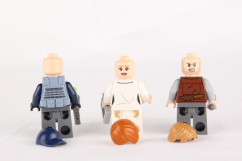 Three minifigs come with this set: an ACU trooper, Claire, and Owen. The trooper comes with it’s standard issue syringe-scoped rifle (a syringe as a scope makes no sense whatsoever) and like other troopers before it, does not have a double printed head. Claire’s two expressions consists of her stern business game face and a surprised, shocked, scared face. Her accessory is a cellphone which, believe or not, does indeed have significance in the movie. Owen’s head element comes with two expressions: one of a smirky grin and the other of teeth-gritting determination. Owen has his lower back-strapped buck knife printed on the back of his torso and also comes with a minifigure knife element which is odd becuase I don’t think he ever pulled it out and used it. Nonetheless, I thought the back was a really nice detail for a minifig. The absence of the two boys is noted, understandably so to spread the main cast throughout all of the sets for sales reasons but all of the included minifigures are accurate for this scene. It’s almost as if the set designer watched the movie or something… 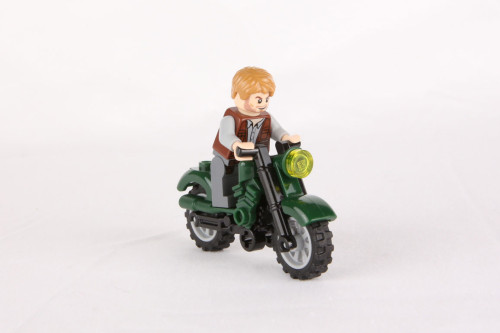 Owen also comes with his motorcycle. Unfortunately, I had not picked up 75920 Raptor Escape yet else I would be recreating that famous scene where Owen is running with his raptor buddies through the jungles of Isla Nublar. But you can bet I will be getting it toot sweet. Surprisingly, this is the ONLY set to include Chris Pratt. 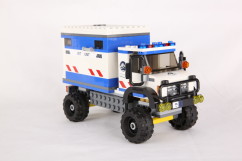 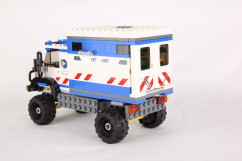 The main build of the set is the Vet Unit ambulance and this thing is hilarious! It is so freaking tall I’m surprised the set didn’t come with a super jumper to launch the minifigs into the cab or the back of the ambulance. I mean look how tall this thing is:

The stickers on the sides should have read “Monster Truck Vet Unit.” 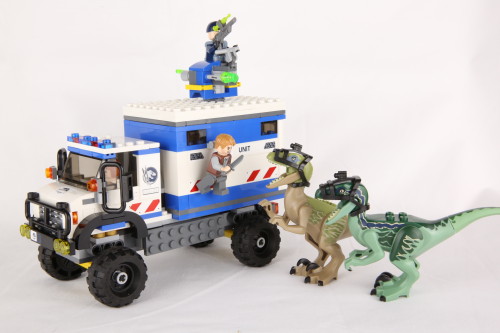 The cab is prety simple with seating for one for Claire to take the wheel. There are handlebar plates on either side of the ambulance shell and if you were to believe what the back of the set box is telling you, Owen is supposed to hang off one of these handlebars and fight off the raptors. Of course that doesn’t really happen in the movie. By the time Owen meets up with Claire, they’ve lost the chasing raptors. 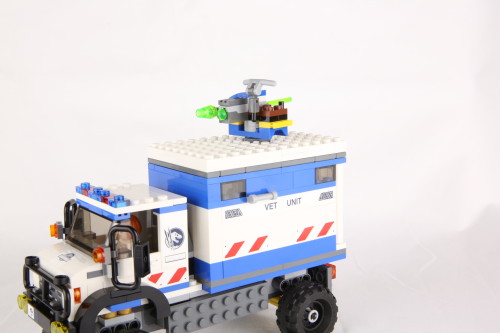 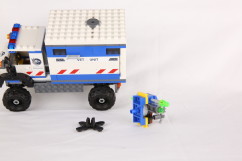 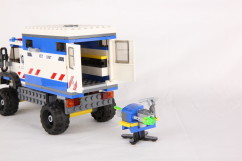 You know what doesn’t happen in the movie? The gunner station that comes out of the back and mounts on top of the truck. For a Vet Unit, it’s packing a pretty good punch. There’s a spring loaded missile launcher attached to the gunner station and the set includes a propellor element in case you don’t want to mount the gun to the roof and instead want to create a sentry station to act as lookout while deploying your mobile computer terminals. I know; those don’t make any sense either. Those terminals weren’t built very well. The tile with the handlebar should be turned around 180 degrees so that the user can actually use the keyboard. They still fit in their designated areas in the back. 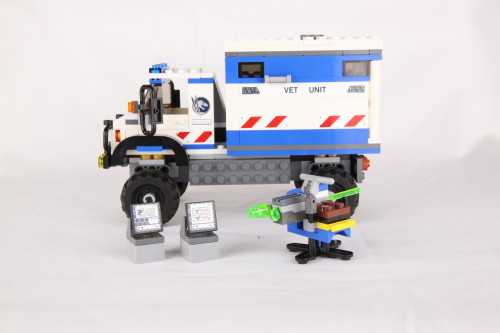 I totally get that the spring-loaded missile launcher is a play feature that has to be worked into every possible set ever. It’s the new flick fire missile for all intents and purposes. But its absurd to include it into a set with a truck that says “Vet Unit”. If it said “Dinosaur Elimination Unit” then it would make sense and I wouldn’t be sitting here grousing on its inclusion. Remember that Pteranodon Review I wrote a few days ago? THAT’s the set that should have had the spring-loaded missiles and this set was the one that should have had that awful net launcher. At least then the weaponry would make sense for Jurassic One and the net would support the idea of veterinary practices of capture and rescue and not kill on sight. 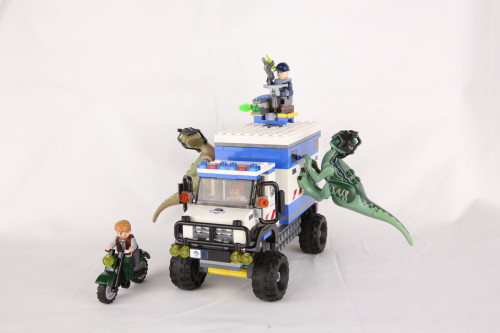 I’m not that into seeking out spoilers or reading leaked scripts; I like going to a movie with knowing as few details as possible so I can be surprised and entertained without anticipation diminishing impact. Before seeing Jurassic World and building this set, I had no idea what the plot was or what dynamics were between Owen and the raptors before I saw the movie. I kind of had an inkling that Owen was their trainer and when I saw this set, I thought oh awesome the raptors are fighting for Owen wearing some sort of mind control device. Before I saw the movie and before I looked at the back of the box, I kind of assumed this was how the set was supposed to be played with: the transport was used to shuttle the raptors from Point A to Point B. Now that the movie is out I realized that they are in fact attacking the ambulance in this particular scene, I still think my way is better.

And that is really the underlying point of all these sets. They give you the very, very basic elements of the scene the set is based on, throw in some somewhat unnecessary play features, ensure it follows the LEGO set design philosophy of conflict resolution, and boom, this is what you end up with. At the end of the day, how you play with them is completely up to you. For me, my raptors ride into battle on the back of an ambulance while an ACU trooper mans the gunner’s station on top, escorted by a motorcycle-driving Owen. If you’re a raptor fan, you’ll need this one and the Walmart-exclusive 75920 Raptor Escape set to complete the squad. Luckily, getting both won’t break the bank but you can probably bricklink it all to save some money.

I said at the beginning of this review that I was going to do the set a favor and not criticize it too harshly on the lack of screen accuracy. Once I embraced that approach, I found it quite liberating and tried to see the set for what it was and what it was trying to do. Screen accuracy is still a niggling point and certainly won’t be forgotten. Casting that aside, I found the set fun to be honest. I want to give the set a 5 but can’t justify it without my own personal bias and enjoyment of the raptors because admittedly, they are not enough to erase the Monster Truck-sized ambulance and the dumb gunner station. It would have gotten a three but the inclusion of Owen tips the scale, splits the difference, and 75917 Raptor Rampage scores a solid 4 out of 5 stars.

You can pick up this set from LEGO Shop@Home: 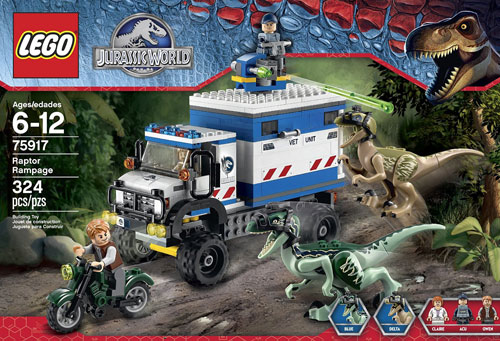