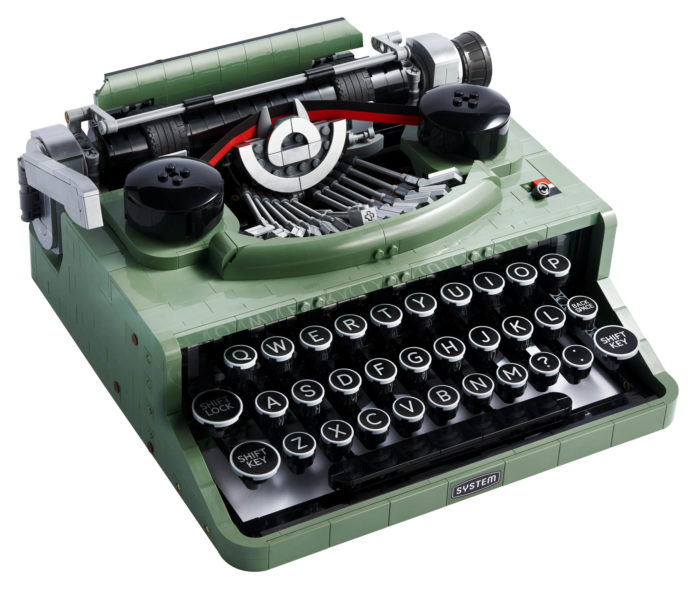 LEGO revealed today the final design for the approved LEGO Ideas project LEGO Typewriter by Steve Guinness, 21327 Typewriter. It looks to be nearly fully functional too. From the press release page:

Intricately designed to mirror the function and tactility of a classic typewriter, the LEGO Ideas Typewriter features a center typebar that rises each time a letter key is pressed, linked to the carriage which moves across as you type, as well as a platen roller that real paper can be fed into.

There’s even what looks like typewriter ribbon element that I don’t recognize as having ever been in a set before. My guess is they used the same material as pirate ship sails but cut and colored to look like the ribbon. I’m most intrigued by the mechanics of this thing. My wife will probably just want one to put in our home office as decoration. Either way, I’m sure it’ll find a way into our home sooner or later. And no we’re not hipsters, not until we haul this thing to a park bench and write a letter on it.

21327 Typewriter has 2,079 pieces and will be available on July 1, 2021 through LEGO.com. VIP Early access begins June 16th. You can view the product page for 21327 Typewriter ( <– affiliate link alert) right now for additional details. It’s a pretty neat looking set and way, WAY more appealing than that stupid map set. And yes, I will continually malign 31203 World Map until LEGO releases another set that’s dumber.