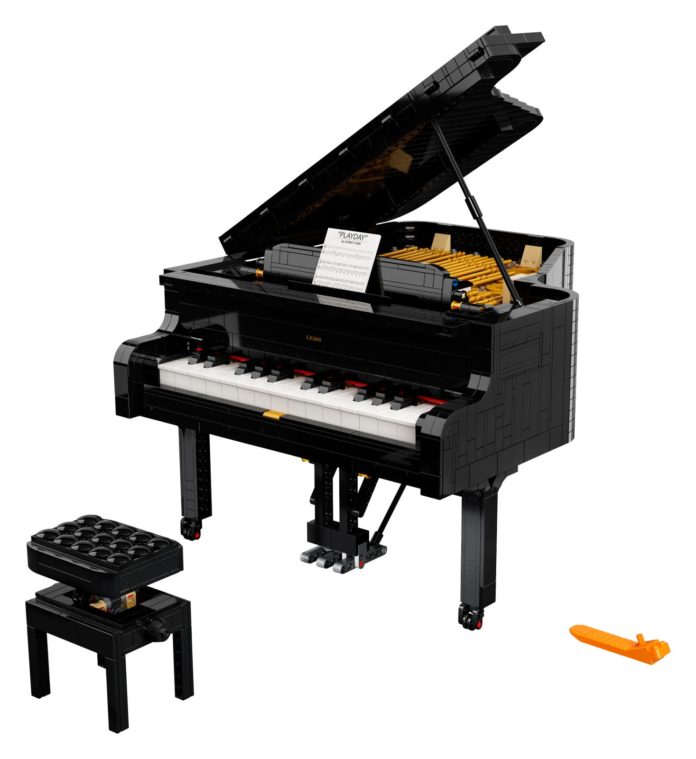 I was super excited about this piece, the Grand Piano from LEGO Ideas, until I saw the price tag: $349.99. Ouch. I honestly didn’t know what I was expecting it to be. It does seem reasonable though considering everything you get:

LEGO sent a bunch of pictures which you can see. The actual design is quite gorgeous and a great model in it’s own right, even if it didn’t actually make any sound. And that is exactly what the original Ideas submission was: a mechanically functioning model that didn’t produce sound. This is where LEGO stepped in to improve the model.

But the thing is, it still doesn’t make any sound if you don’t have the app. That’s not really explicitly stated out right, but on the product page, the designer video above, and the press release, there are a number of references of making sound with the app. 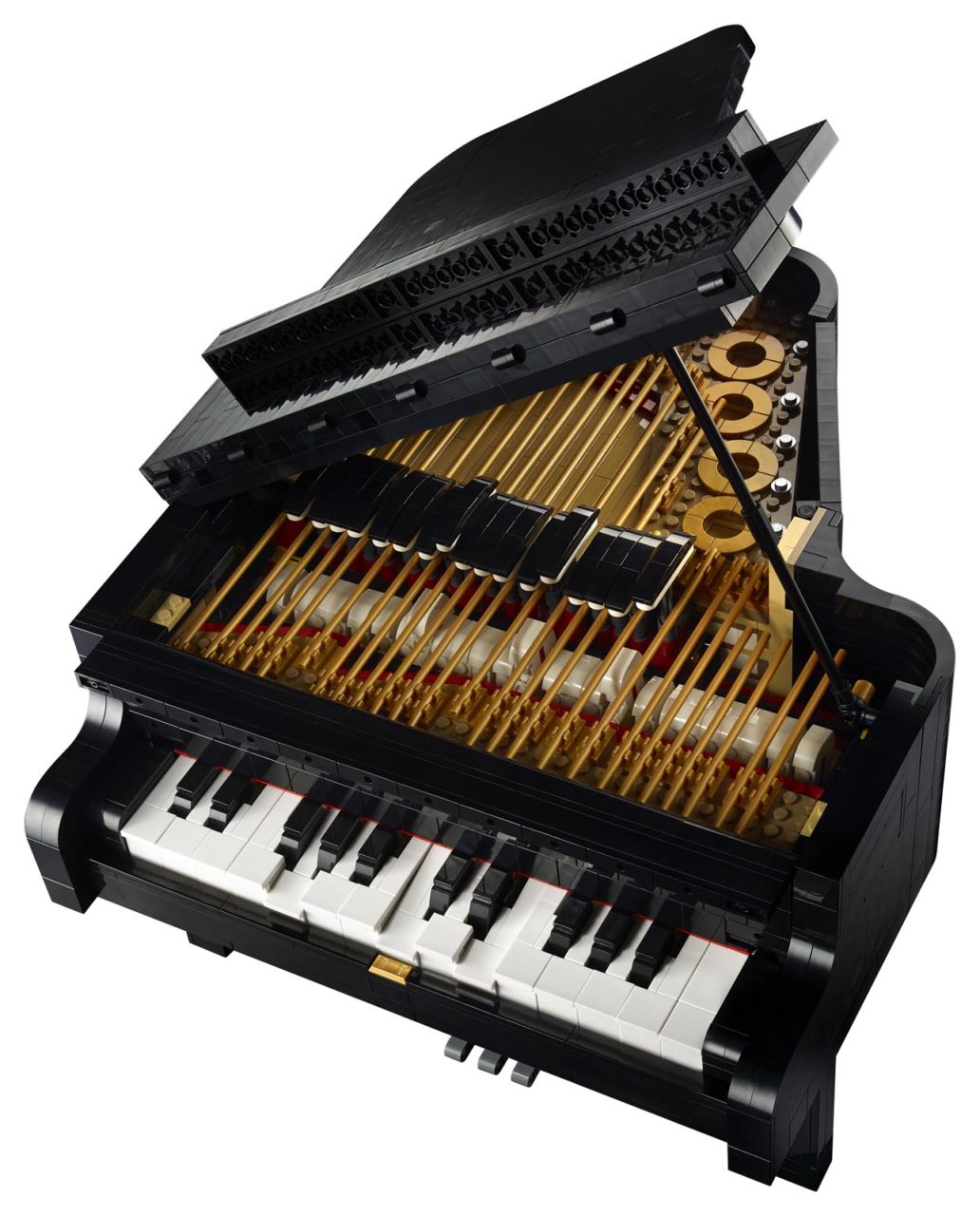 Makes sense because there aren’t any steel wires on the inside of this thing. I have a ton of questions and theories on how this thing actually works which I won’t get into here. I’d rather get the set and see for myself. But I will leave you with the top question: what does it sound like? Because the designer video doesn’t demonstrate the app at all.

Okay, another question: what’s the sensor on the left for? 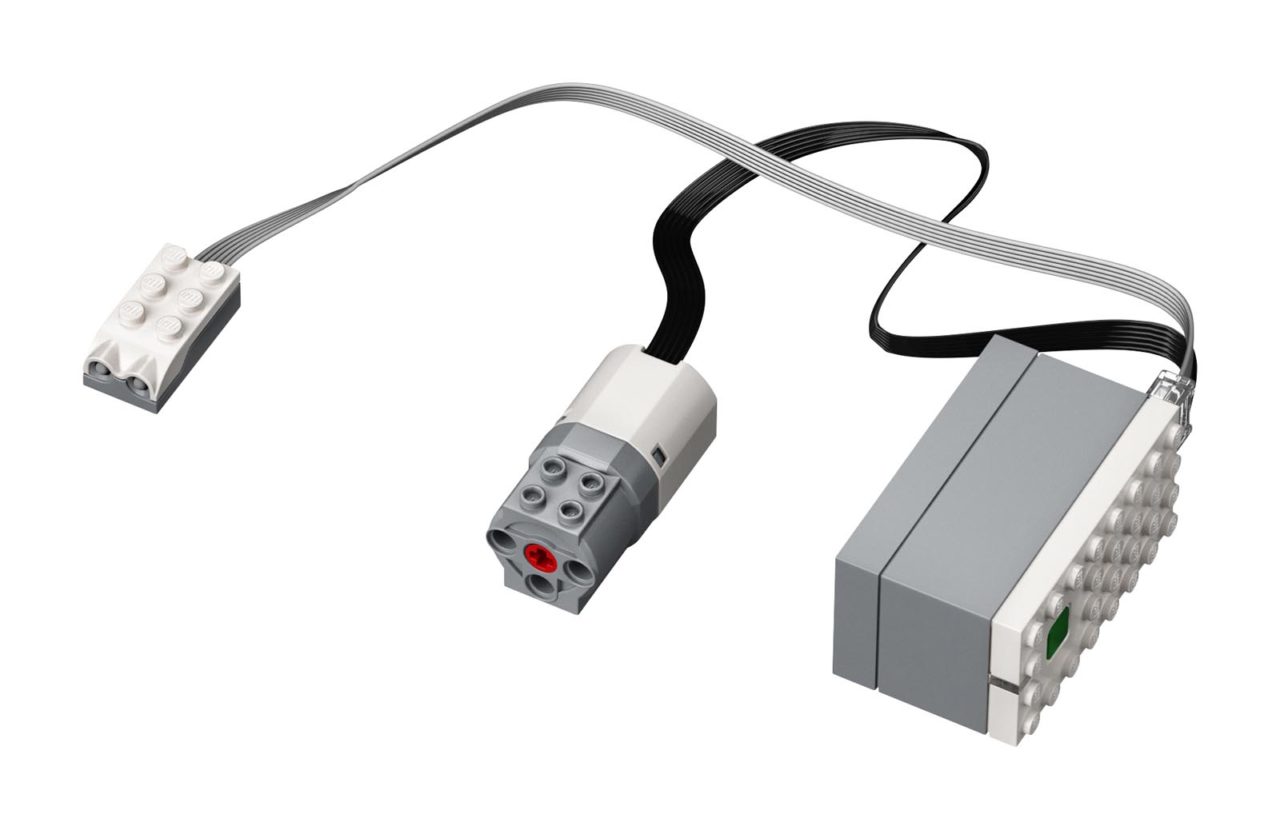 Because based on how it’s laid out, I can’t figure out what it could possibly be sensing.

Okay, last and final question: what does this exactly mean? 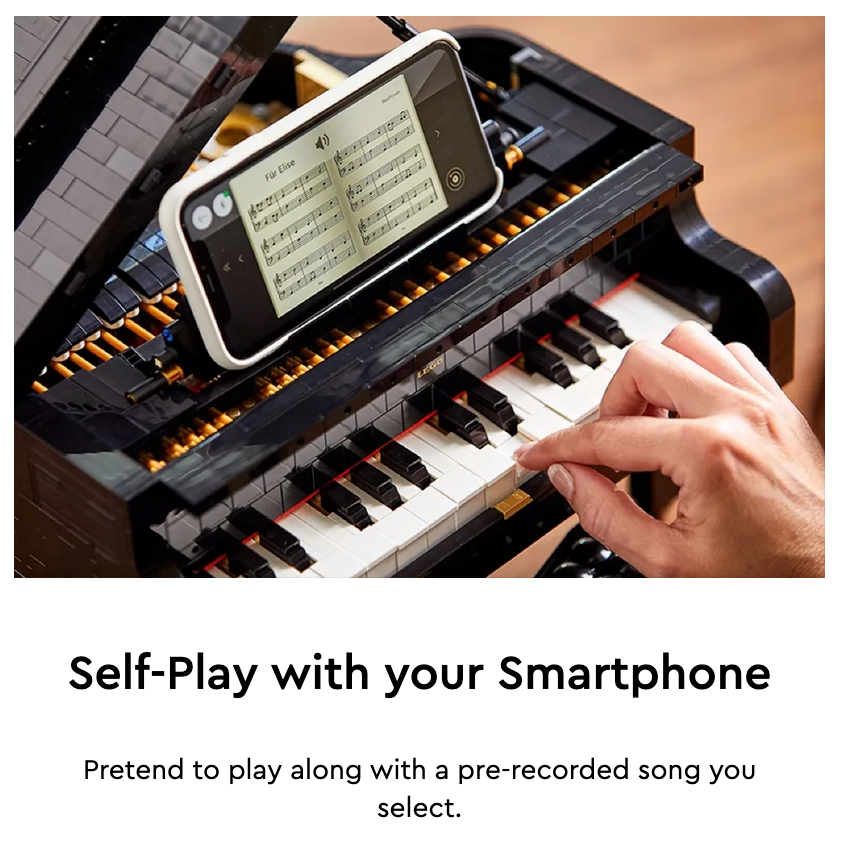 “Pretend to play along”? Can you not actually play a note by itself? Or play another song that isn’t part of the four that’s included?

The set releases on August 1st. It’s shaping up to be a very expensive month.

Imagined by an avid LEGO builder, the LEGO Groupâ€™s brand-new LEGOÂ® Ideas Grand Piano is a show-stopping set for adult music lovers and builders – available from 1st August from LEGO.com and LEGO Stores.

[23rd July 2020] A dazzling idea from a keen LEGO builder and music enthusiast, has now been brought to life after receiving overwhelming demand from the public – as the LEGO Group launches the brand-new LEGOÂ® Ideas Grand Piano™ set. The latest product is part of the LEGO Ideas collection, which conceptualises and produces the creative wonders imagined and voted for by LEGO fans themselves.

Designed with the intricate elements of a real grand piano, this brand-new set is a fully immersive build. With a clever motor and working keys, when the set is combined with the LEGO Powered Up app, fans can become musical maestros one brick and one note at a time – making it The LEGO Groupâ€™s first-ever piano set with the ability to play music.

Talented builders can try their hand at creating their own masterpiece on the LEGOÂ® Ideas Grand Piano™ using the LEGO Powered Up app, which allows them full control of the musical notes and piano keys. Alternatively, those looking to sit back and relax can choose to select â€˜auto-playâ€™ and enjoy the dulcet tones of one of the ten pre-set songs available.

The brand-new set is a masterpiece of craft and innovation, featuring all the makings of real-life grand piano to give an authentic musical experience in LEGO brick-form. These authentic features include a removable 25-key keyboard, a top lid that can be propped up, an authentic hammer action and a moving damper and pedal, which help to make the LEGOÂ® Ideas Grand Piano™ as beautiful as it is functional.

The new grand piano set is part of the LEGO Ideas collection, which offers fans the opportunity to submit their own brick creations with the chance to have their concept brought to life with the help of LEGO master designers and a share of the profits. Other recent LEGO Ideas sets inspired by LEGO fans, include the LEGO Ideas Pirated of Barracuda Bay and the LEGO Ideas Friends Central Perk.

Imagined by music teacher and LEGO aficionado Donny Chen, this set was designed as a way for him to combine his passion for music with his passion for building. To add to the excitement and personal feel of the build, the LEGOÂ® Ideas Grand Piano™ even features a music sheet composed by Donny himself.

Speaking about the process, Donny Chen said: â€œWhen Iâ€™m not building with LEGO bricks, Iâ€™m teaching, tuning or writing music on my piano. So, when I first discovered LEGO Ideas, I knew I wanted to build something that not only combined my two passions, but also looked visually stunning. Itâ€™s truly an honour to see my idea brought to life by the talented people at The LEGO Group and I hope it brings joy to all the other music fans who voted for the idea on the LEGO Ideas platform.â€

Federico Begher, VP of Global Marketing at The LEGO Group added: â€œWe get so many amazing concepts submitted through our LEGO Ideas platform, but when we saw Donnyâ€™s piano design it really stood out as something extraordinary, with great potential to become a truly unique LEGO set.

The accompanying images and video submitted by Donny really sparked some ideas within the team. We believed that including power functions as part of the model to enable the set Â play real music in real life would elevate the design even further. We simply could not pass on the opportunity to create the ultimate LEGO Ideas Grand Piano model for music and LEGO fans alike!â€

The new LEGOÂ® Ideas Grand Piano™ set is the latest example of how the LEGO Group aims to inspire builders of all ages to build, rebuild and get excited by the process of creation.

LEGOÂ® Ideas Grand Piano™ will be available directly via LEGO.com and LEGO Stores from August 1st.