You know, I’d totally forgotten that we hadn’t heard anything from this particular wave of Ideas, the second one from 2015. I thought they all just sort of died off. Two made it through this time, the Caterham Super Seven and brick-built Adventure Time figures.

The Caterham Super Seven is the shock here, since I thought it was a bit too niche.Â Carl Greatrix’s models are quite nice looking, but cars aren’t my thing so I wasn’t super-enthused for it. They do look fantastic, and there’s a chance that they could have good parts. If anything, I may end up with them for my daughter, who really likes racing LEGO cars, and maybe this will get her to leave my Quinjet alone. Probably not, but maybe. 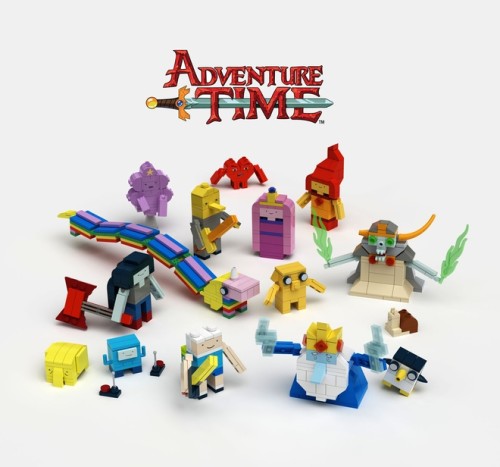 The Adventure Time brick-built figures is less shocking, as it certainly is right up LEGO’s alley, but I am surprised they got theÂ licensing worked out to make it work. A lot of other similar things have missed I expected this one too. I know nothing about the cartoon, but do own a shirt that has the Adventure Time guy riding an AT-AT like a dog. So there is that.

LEGO also announced the next review, the 3rd of 2015. Given their current schedule, I look forward to those results in 2018 (and the five other reviews sets that get announced, somehow, before that happens). 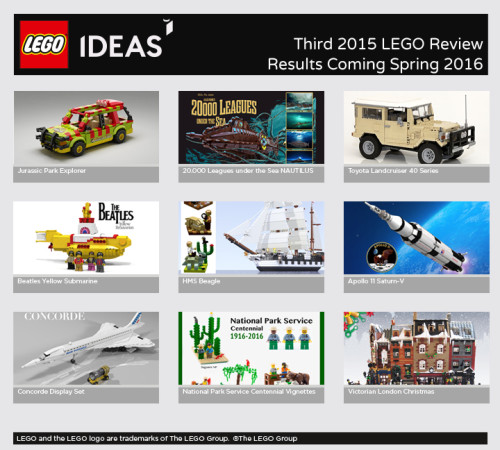 My guess for the big promise sets in this would be the Concorde or the Saturn-V. I would particularly love to see the Saturn V, as I missed out on the 7468 Saturn V Moon mission way back in the day, and would absolutely love to see it again. A few are pretty easy to discount straight away, like Lond Christmas, the NAUTLUS, and Beagle (all for size), and the Jurassic Park set because all of the others have been rejected too. 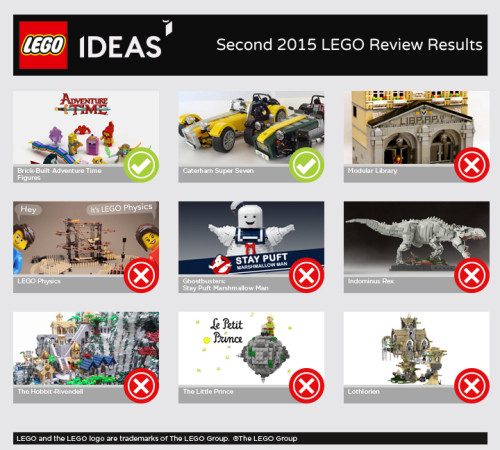 It’s also not surprising on the stuff that did get rejected this wave. Additionally, the video mentions that they are no longer considering the Star Citizen fighter. I assume it got dropped because, like the game, it was just going to continue to roll over and never come out. And LEGO doesn’t play those games.