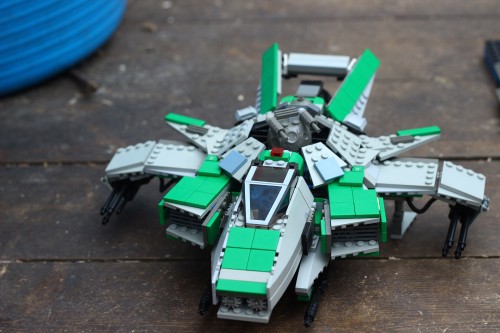 Another build has gotten to that illustrious 10k mark on LEGO Ideas, this time the F7A Hornet, a ship from the upcoming Star Citizen game. Don’t feel bad if you haven’t heard of the game, because it is an interesting story. It’s from the guy who created the classic Wing Commander series, Chris Roberts, and was one of the first crowd-sourcing campaigns that just broke expectations all over the place. After blowing way past their original goal, the game raised $2.1 million on Kickstarter… and another $54 million through other sources. I like to imagine that the development team is sitting on a giant pile of money like out of The Dark Knight. I’m not sure who they’re going to set on fire though… probably whoever was responsible for that terrible Wing Commander movie back in the 90s.

As an idea, this is interesting, but I’m skeptical of the reach. There are so many different ships that are being made in the game, but they’re not even all that well known to the backers (like me… I didn’t realize it was a Star Citizen ship until I read the description, and was one of the original backers). I’d be nice to see some more space stuff out there, but unlikely that LEGO would hit what is still a very niche license… especially one that conflicts with their biggest seller, Star Wars. I like the ship, and like it even more that the guy took his LDD version and actually built the thing. Even better, he’s sharing the instructions so anyone who’d like to build it can as well. I’m curious to see where this one ends up.

Save $10 Off Friends Central Perk Set