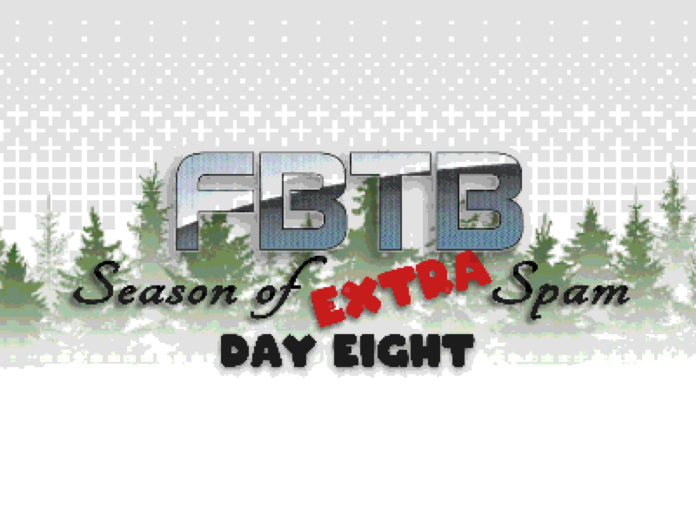 Things continue to roll along, and someone should probably go check on Nick. This might be the Advent calendar that finally breaks him. 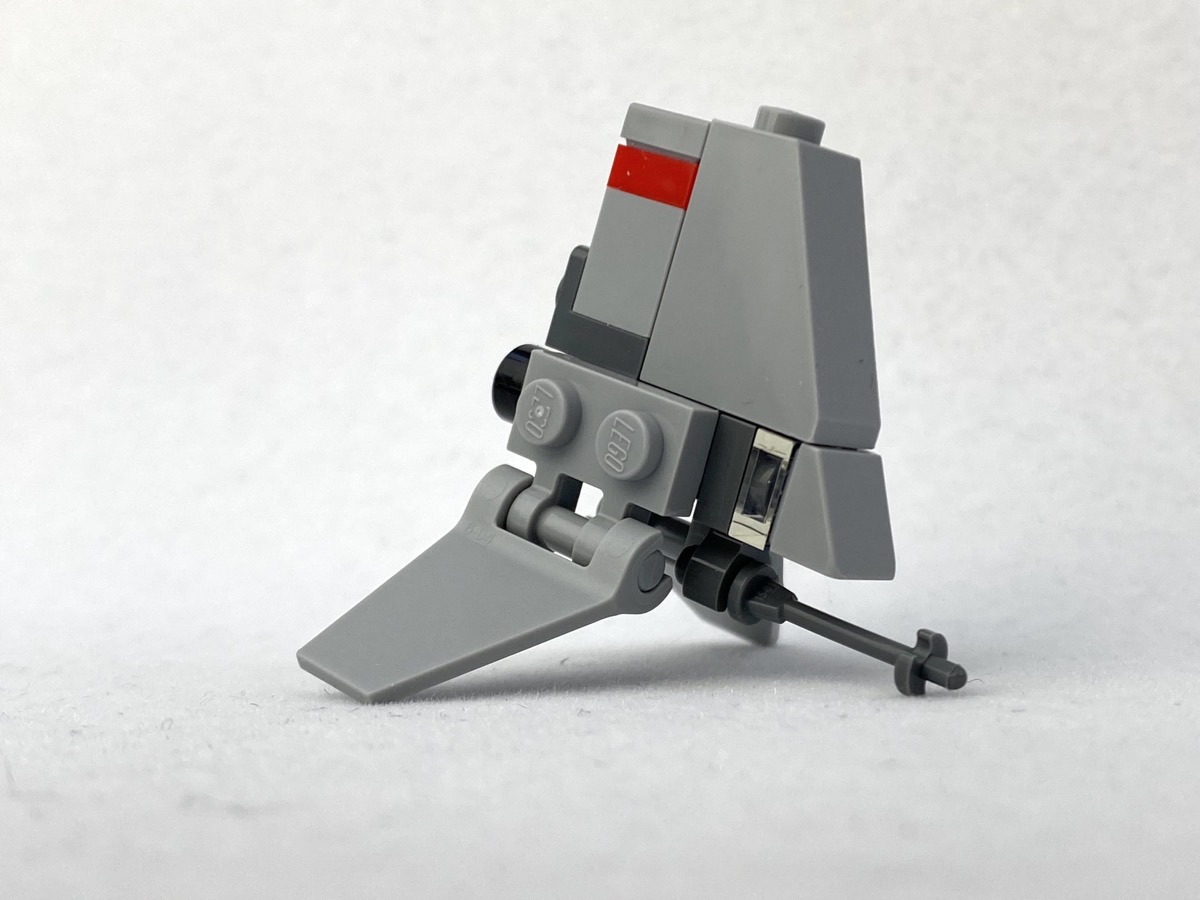 I love this! Pretty recognizable at this scale, and that’s remarkable for a ship that had about two seconds of screen time in the original trilogy. And those two seconds? Just a hand model that Luke swoooshed around. The T-16 Skyhopper doesn’t get a lot of love but this is just a great model to pick up and swoosh around a bit. This with yesterday’s Landspeeder, there’s a lot of Episode IV love in the air. Surely we’ll come crashing down tomorrow?

The other remarkable thing about this is how the angle of the 1x2x2 slope is a perfect match for the SNOTted cheese slope. it’s almost as if they’re the same degree or something.

My secondary calendar is still a no-show. Conundrum!

I had high hopes today. Yesterday’s build was my favorite so far, and the hot sauces haven’t been killing me lately.

Here’s what I get for being optimistic:

So not the Shrieking Shack after all, as I predicted. Something far more random. I think it’s the lake towards the end of the movie, where Harry saves Sirius from the Dementors. It could be, or it could just be a random woods with Dementors. Or floating Emperor Palpatines. Could be anything. 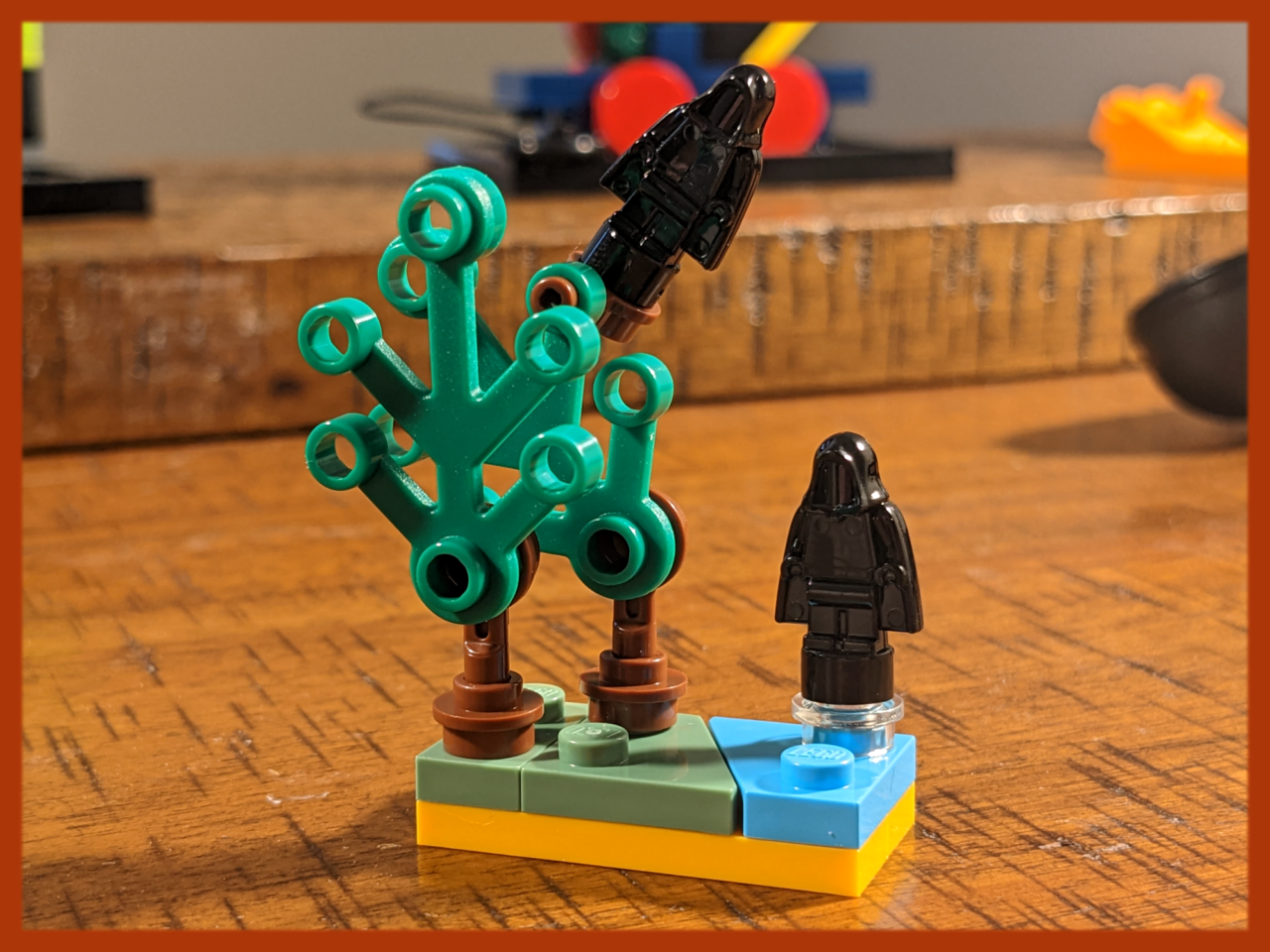 The hot sauce – ASS BLASTER – kinda came out of nowhere and hit me with some pretty serious. Still nothing compared to the ghost pepper of Day 2, but one of the hottest so far. I do think my tolerance is getting higher, which is helping things a lot. 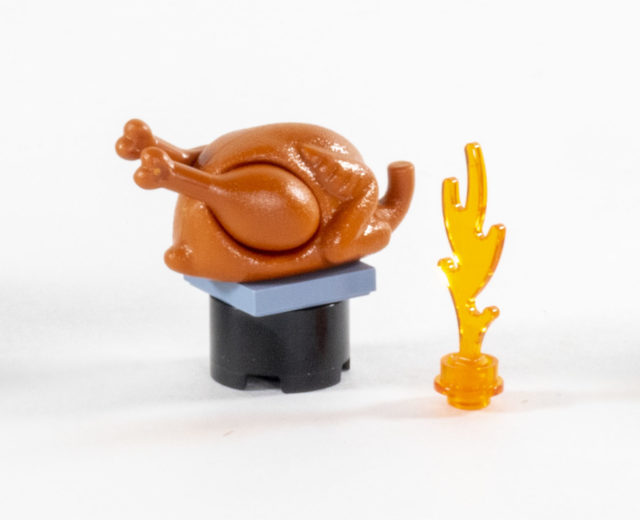 Honestly, it feels like I can’t win with this thing. Okay, yeah, so, we’re at a holiday thing with a turkey. So that’s something. But have you ever seen a lazier build than this thrown together? This is what you do when you have the bits left over in a set and you’re board and decide to slap something together. Yeah, it’s cool to get the turkey but come on, they could have put something around the fire instead of giving us a single trans stud to stick it in instead of a steno pot we got at Dollar Tree but couldn’t afford to also get a plate there too so we’re just going to chuck at at the side and hope that’s enough to keep the whole buffet warm. Just… miss.

Oooh… shiny, we have a a Silver Templar. Unlike our other Space Marines thus far, this guy is a practical baby, a marine from the Ultima Founding, the most recent founding of Space Marines born out of the Indomitus Crusade, when resurrected Primarch Robute Guilliman struck out across the galaxy with the Primaris Space Marines to fortify and bolster chapters and unify the Imperium while it was on the brink of collapse.

What that made-up word salad means… the Primarchs were the demigods that served as the genetic origin for the chapters. Robute was the master tactician that is the but of ten-thousand jokes (my personal favorite is to call him Mr. Bob Gillman – which is also an homage to the horrid and wonderful Revenge of the Creature) and the Primarch of the Ultramarines. If you see a picture of a Space Marine from Games Workshop, and they’re blue… they’re probably an Ultramarine. They’re the literal poster boy for the game. Little problem, he was gravely wounded and killed and/or thrown into stasis back in the year 121.M1 (31,121) after his traitor brother cut his throat in battle.

Fast forward several millennia, and the Ynnari (Games Workshop changes their names a lot) looked into the future and decided to bring him back for reasons, he and his new space elf bae saved some things before a world got blown up, and then Bob went back to Terra to talk to his undead corpse of a dad before going over to Mars and finding the guy he hid underground for ten thousand years to work on a secret project who had finally worked out how to make Space Marines about six inches taller. Think… “What if the sequel trilogy was just Geonosis again, but we designed them all based on Dwayne Johnson instead and called it good.”

None of that past paragraph was made up in the Warhammer 40k lore. Warhammer 40k is weird. Out of game, old Space Marines were kind of goofy looking and posed like they were about to poop, and scaled wrong compared to everything else. So Primaris were a way to introduce a ton of new sculpts and refresh models more than two decades old. In story, there were suddenly hundreds of thousands of new marines, Greyshields before they were linked to a chapter, being sent out to existing chapters, and hundreds of brand new chapters founded with the new tall bois.

They also have style, cause silver armor is cool.