With the recent announcement of this year’s San Diego Comic Con set of four exclusive minifigs, I thought I’d take a moment and reflect on what happened at last year’s Comic Con.

For a few years now, LEGO’s been offering a giveaway at their booth but it wasn’t until last year where the demand shot through the roof. The distribution method was always the same: stamped and non-stamped tickets were thrown into a box, you reach in and draw a ticket. Stamped means you win the exclusive (or the chance to buy it) and non-stamped means you win nothing. The number of times you could draw a ticket was only limited by the number of tickets left in the box. You could draw a ticket, and then get right back into line to draw again. Rinse and repeat until all the tickets or exclusives were gone. The 2011 exclusives were Dark Knight Batman and Green Lantern. The crowd and demand for the exclusives that year were greater than previous years and the line that wrapped around the booth twice over became a security concern. 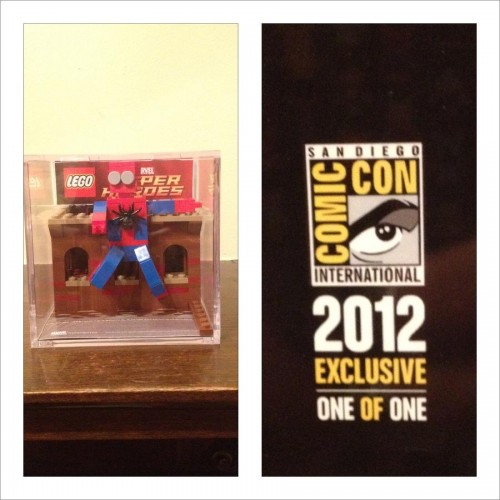 Last year, one of the promotions that LEGO was running was that they were giving away a different model every day. It was a special 1 of 1 model themed for each day. To try and win the model, you just needed to pick up a raffle ticket until they ran out. The winning ticket would be drawn and posted later in the day at the their booth. The line to pick up the ticket was mismanaged, and by mismanaged I mean not at all, and as a result tempers flared, people yelled, and security came down again. This happened on Thursday. 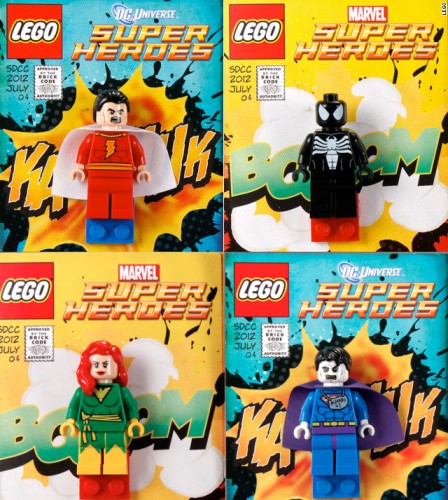 Friday was the big day that everyone was waiting for when they were supposed to give away four exclusive minifigs: Bizarro and Shazam for DC, and Black Suit Spider-Man and Jean Grey for Marvel. And the demand was even greater than the year before. There were 1,000 of each figure for a total of 4,000 figures to give away. In an effort to alleviate the line and prevent the mob scene from the day before, the powers that be at LEGO tried a new plan: badge scanners. All badges for attendees have a special barcode. So in cooperation with show management, LEGO was able to procure badge scanners. All badges would be scanned in the morning, and then a list of all 4,000 winners would be posted. This is where the real problems and commentary comes in. Be warned that I have a foul mouth but all they have been beeped:

I meant to post those videos last year after that frustrating experience, but I figured with the news of this year’s exclusives, now is as good as time as any.

I’ve been going to comic con for years, and in all the times I’ve chased after exclusives, I have never been witness to such an event. I’ve offered volunteer time to help with the situation every year, but they have yet to accept. A person at the LEGO booth last year who shall remain anonymous admitted that they had too much going on: a different focus every day, a giveaway every day, four exclusive minifigs on Friday, a different mural build every day, and an exclusive set for sale throughout the show days. I have no information as to what other activities or giveaways LEGO will be offering; they will most likely at the very least offer an exclusive set for sale like last year’s Darth Maul tin. So looking back at last year, should we expect the same sort of distribution method? I honestly have no idea. I don’t even know how many of each figure will be offered. Given that there are four this year and there were four last year, it might be a safe assumption that they will be given away on a single day. With plenty of licenses to promote during the show, they may focus on a different license every day like they did last year lending support to the single day theory. If they go with a different plan, they could giveaway one figure a day and spread it out over four days. Whatever the case may be, I hope they’ve learned from past experiences and reconsider. The badge scanners were a great idea to avoid a massive line and crowd to draw tickets, but it just created a massive crowd when to came time to check the list if you’ve won. And I’m pretty sure the Fire Marshall, show security, booth employees and everyone didn’t like that.

First Come First Served: Part of the problem with the crowds is that the drawings were scheduled for a specific time during the day, so minutes and sometimes hours before the drawings would start, a line would start forming. If the ticket distribution started immediately when the doors opened, the line would only form for a short period at the beginning of the day until the tickets run out. And this brings me to my next point…

Less Non-stamped Losing Tickets: If they’re going to do a random drawing, have less losing tickets so that they could cycle through the winners as fast as possible and avoid a massive crowd that’ll alert show security and the Fire Marshall. Or, and here’s a radical idea, get rid of losing tickets altogether so that every ticket is a winner.

Badge Scanners and Multiple Lists: Part of last year’s gigantic mess was due to the fact that they posted all 4,000 winners in one list and posted in one location. Break up the list in chunks by last name and post them in multiple locations OR post multiple lists in multiple locations. This isn’t a great system at all though. While badge scanning definitely speeds things up, the list is where the the crowd happens, especially with 4,000 names on it.

One Minifigure Per Day: If LEGO offered a different figure each day, it would cut down on the list size and the crowd size by 75%. However, This would go against any plans on promoting a different license per day if they’re giveaway for LEGO Super Heroes is spread out over all four days.

If it were up to me, this is how the minifigs would be distributed: a different minifig everyday on a first come first serve basis with badges stamped to limit one per guest per day. It would only painful for the first hour of the day while people line up for their figure, but the upside is that LEGO will have the rest of the day to manage their booth without an impending crowd forming. The badge stamping would be the best method to ensure that the giveaways falls into the most hands and prevent scalpers from getting multiples. It’s not a perfect system, I don’t think a perfect system exists, but this is probably the best method that addresses all the major concerns. Anyways, I’ve rambled on for over a thousand words now and it’s way past my bedtime.

Whatever method LEGO chooses to go with, we will be reporting on it as soon as we find out. San Diego Comic Con starts next week with preview night on Wednesday July 17 and runs through Sunday July 21.