If anything can be said about the new Superman film, it’s that it’s certainly polarizing of Superman fans. The previous Superman set we had, 6862 Superman vs. Power Armor Lex, was in my mind an absolute stand-out from the first Superheros DC wave. It featured a classic comic-style Superman, his ultimate villain, Lex Luthor, and a cheaply-made Wonder Woman to boot.Â Â Of course, back when that set came out, Man of Steel was still a prepetual rumor, given that the franchise had more-or-less died after the stinker that was Superman Returns.

The thoughts about the film are varied, ranging from awful, to okay, to best thing since bacon-flavored socks. Regardless how you feel about the movie, though, the sets can stand alone. We saw this before, with the Iron Man 3 and The Avengers line, as direct tie-ins that came out before the movie hit. The Avengers sets were absolute gangbusters, and the Iron Man 3 sets I’ll cover in my upcoming Malibu Mansion Dreamhouse review, so how do the Man of Steel sets stack up?

Just as a warning, there will be some spoilers in this review, because these are movie tie-in sets. You’ve been warned. No crying in the comments because I revealed that Superman is killed by a giant spider in act III.

Is it weird to anyone else that the biggest battle of the entire movie, the showdown between Kal-El and General Zod, is the smallest set? Biggest city, biggest battle, biggest plot point, and the biggest actions in the movie all in a $13 set? Maybe it’s just me. 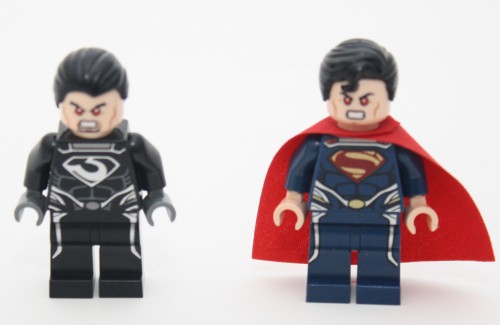 This is a small set, clocking in with two minifigures (as previous Super Heroes sets have had), Superman and Zod (without his armor). Given that these two figures show up in all three of the Man of Steel sets, I suppose if all you want is the figures, that’s a bonus here, since you’re out at $13 and done. 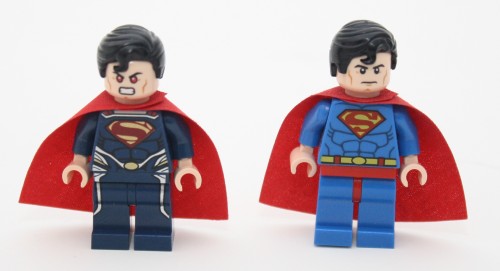 Superman, complete with his movie costume, shows up here. The hair is the same Â as the comic-style, though the face is different. Both he and Zod feature an alt-face with glowy eyes (pictured in the main picture) and also a supremely angry face. It sort of fits in the movie, though more about uncertainty than anger for Superman. What is kind of surprising is that LEGO, at LONG last, has figured out how to kind of line up the printing… or at least make it so the printing isn’t so obviously off-kilter. 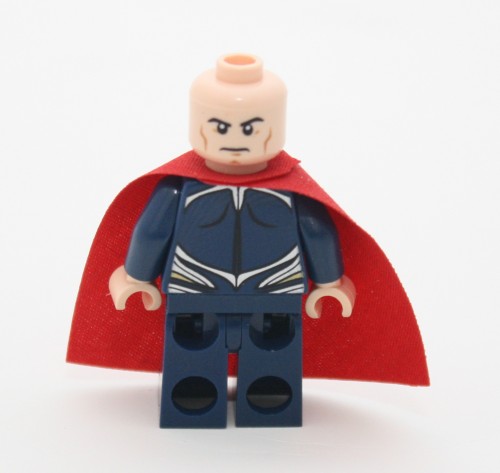 The regular face is nearly identical to the old Superman, which is a good thing. The costume design is okay, I guess, though I’m not a fan of the darker costume. I like the campy nature of Superman, which sort of bugged me in the movie. Take away the S and make this some generic superhero movie, and it’d be totally passable. But that’s a review of the movie costume, and this is about the figure. You know this minifig is Superman. 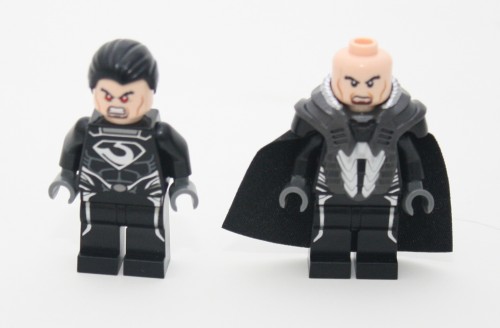 Zod (pictured here with the version that comes in the other two sets… i.e. including armor), is a fairly decent example, though I’m not a fan of the hair. The hair is decent for the Superman II General Zod, but Man of Steel Zod has a military cut and a half-goatee. So, the face is accurate, at least around the mouth. I’m not sure how you make him look all crazed and unhinged like he was in this fight… 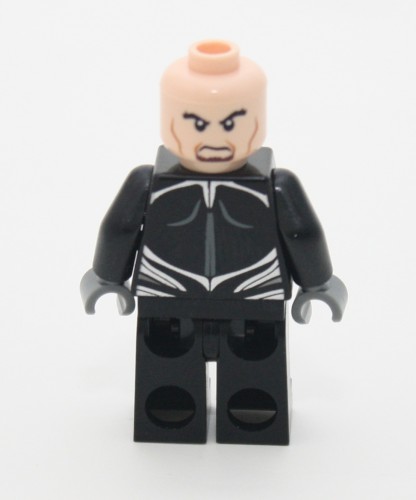 While the armor we wears in the other sets is interesting, I like the printed torso of the figure, and the letter on the chest, which I assume is Zod, given that it’s his surname. He’s actually named Dru-Zod in the comics, though it’s hard to take him seriously when your name sounds like Drew. I hear the name Drew and I can’t help but picture a frat boy in two-collars, wearing an ironic cap and holding a cup of Natty Light (apologies to anyone naming Drew that’s reading this if that doesn’t describe you). So, Zod it is.

When I first built these sets, I figured that the exclusion of the armor was just LEGO being cheap. After seeing the movie, however, I see that they can be cheap and have some pretty cool attention to detail, which is nice. 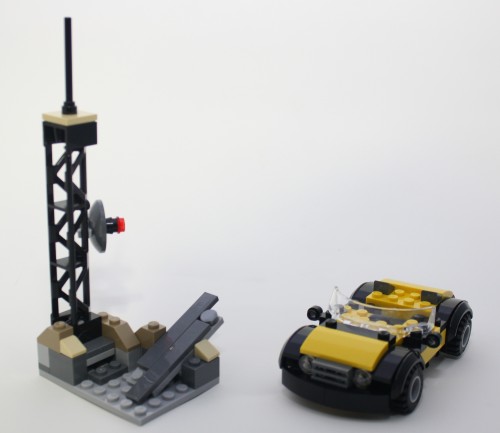 The set itself is basic, given the price point. Again, this is weird, since the whole battle of metropolis was an awesome, CGI-laden affair. While I think the movie itself was a good action movie (and a poor Superman movie), the fight was certainly epic. It somehow deserved more than the basic playset you see here. 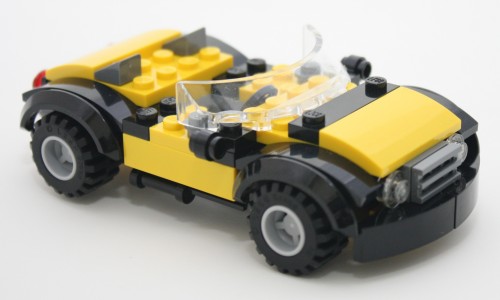 The most striking part is the little LEGO car, which suffers from a terrible case of System-scale-itis (meaning a full car seats one person in a terribly impractical manner). I actually quite like the look of this car, and it has a good selection of parts. Getting some more black rounded slopes and yellow full slopes is great. I actually need to pick up a whole bunch more of the yellow ones, since I’d like to make a Union Pacific train engine and then blow it up in a mock Smallville battle. It’s not flashy, but a decent little toss-in. 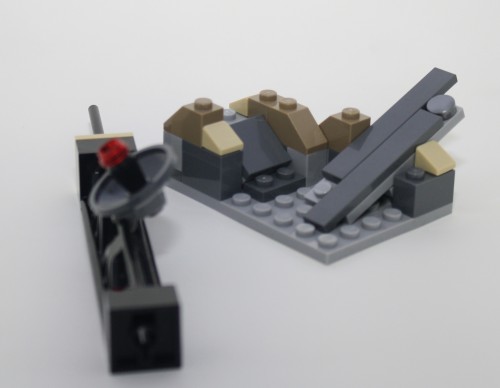 The tower, on the other hand, comes with a little catapult launcher. The idea of a “jump” actually has a place in this movie, and is a good little nod for Superman nerds. Originally, Supes couldn’t fly (and couldn’t again in the N52; if you know what that is… well, I weep for you along with myself). You actually see in the long, drawn-out origin scenes our boy Clark learning to jump before eventually learning to “fly.” All of the Kryptonian prisoners, who are powered by their armor and not the yellow sun (until Zod soaks it up after taking off his armor), and they jump and dash around.

That being said, this is just a collection of “what are some parts we can toss in here to increase the number of parts and certain people to complain less?” It’s a playset feature that flings a minifigure a few inches. The tower is sort-of like a scene in the movie, except in that case it was actually a steel I-beam, which was lasered in half. It’s a $13 set, so I won’t pick on it that much, but the little dish on it is weird. 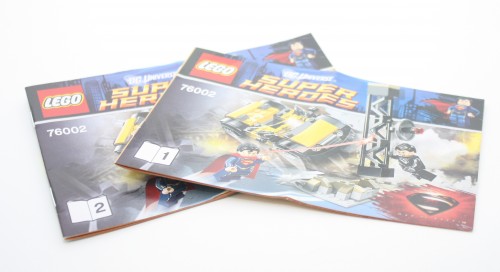 One last point, and something I’ve been meaning to rant about in a lot of sets, is the absurd decision of splitting a 119-piece set into two instruction books. I’m all for numbered bags in the bigger sets, and splitting things up. Anyone who isn’t hasn’t built the UCS Falcon (or is some kind of masochist), but I think that a certain amount of pecking around isn’t a bad thing. Kids can figure out how to find a small number of parts. So stick this in one book and do something better with it.

In the end, this is a good little $13 set that makes it sort of aÂ disposableÂ pick-up. It would have been nice if it had a bit more variety compared to other sets, or better, if the other sets would have had a different selection of figures. I would have loved to see this set be a little bigger and include Perry White along with it (and not just to get a Morpheus figure), even if that would have meant some more money.

Verdict: Buy it, especially if it’s on sale. It’s worth the low price. Â You can pick up this set, and the rest of the Man of Steel line, on FBTB’s site at LEGO Shop@Home 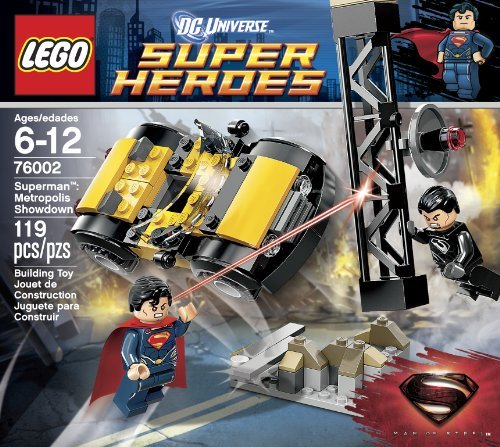