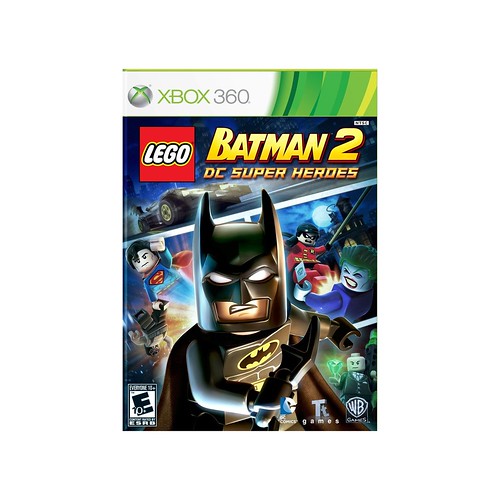 In case you have haven’t pre-ordered/ordered/bought LEGO Batman 2: DC Superheroes yet, I’ve compiled a list of reviews the game is receiving from various outlets. So far, it looks like TT Games and Warner Bros. Interactive have another hit on their hands.

But as with any Lego game if in doubt just start smashing. And as mindless as the combat and destruction may be the collection of little Lego studs is as hypnotically addictive as always. And it may just be baby steps but this is a definite move forwards into a more expansive kind of Lego game, one in which it’s possible to get lost for weeks and whose appeal is almost as broad as the toys on which it’s based.

Lego Batman 2: DC Heroes isn’t groundbreaking but it is consistently fun, and while it might not take top honours for best Batman game of all time (that belt is still held by Batman: Arkham City), it’s easily the best Lego game we’ve seen in years.

In the end, then, it’s a Lego game as you’ve come to expect – not deep, demanding or particularly complex, but applying charm with Kryptonite effectiveness through dozens of fully playable, fully voiced superheroes and a puzzle-packed open world.

LEGO Batman 2: DC Super Heroes is a step in the right direction for a series that was flirting with stagnation. With 50 available characters, a slew of corresponding skills and abilities, an open world that encourages exploration and discovery, a halfway decent story, and rock solid control, this one is quite the package. The camera can still be iffy, the execution of certain hero skills leaves something to be desired, and some of the puzzles are a little goofy, but beyond thatâ€¦ Bottom line is if youâ€™ve enjoyed the LEGO games up to this point, youâ€™re gonna live the latest.

Despite attempts to update how the LEGO games play, LEGO Batman 2: DC Super Heroes does somewhat fall into the trap of being more of the same experience weâ€™ve already had with other licensed titles of this sort. When it comes to recommending this $50 USD release for purchase, I have to address two distinct crowds. If youâ€™ve already had your fill of the LEGO formula or like your games to be very challenging, you can skip this since there is little here to really bring you back. Younger and less experienced players looking for relaxed entertainment will be well served however, and that crowd may want to look into this title.

LEGO Batman 2: DC Super Heroes is a collector’s paradise. You have to play through the game to get studs to unlock characters to go back to old levels and access different areas to collect more secrets. I polished off the story in about nine hours, but I spent the next 11 chasing down bricks and characters — and I’m still not done. The open world stuff could use some tweaks, but the little stumbles don’t stop LEGO Batman 2: DC Super Heroes from being a great game.

Travellerâ€™s Tales took some chances with Lego Batman 2. The addition of spoken dialogue paid off well, and I hope it becomes a standard for all of this developerâ€™s games moving forward. Transferring the classic Lego gameplay into a vast overworld is also a success, but the redundancy in secret solutions in this play space hurts the experience, almost turning it into a mundane collect-a-thon. Thankfully, the classic Lego gameplay dominates the main game, making Lego Batman 2 another goofy brick-building blast to play.

“Lego Batman 2: DC Superheroes” brings back Batman and all his friends and enemies in a fantastic Lego game.

Despite feeling instantly familiar, LEGO Batman 2: DC Super Heroes isn’t just more of the same. It improves the core gameplay of the series, adds new features and characters, offers a long, engaging and well-presented story and swaps the hub area for a visually rich and fun-packed Gotham City to explore. There are issues that need addressing in the open world, but this is still the best LEGO game in the franchise so far.

You can purchase the game from Amazon

for all current systems.

Drock lets us know that TRU stores are currently having a promotion. Buy the game and select one of four sets as a freebie.

Target is having a deal of their own. Buy the game and either the Batman or Joker ultrabuild sets and receive a free $10 gift card.