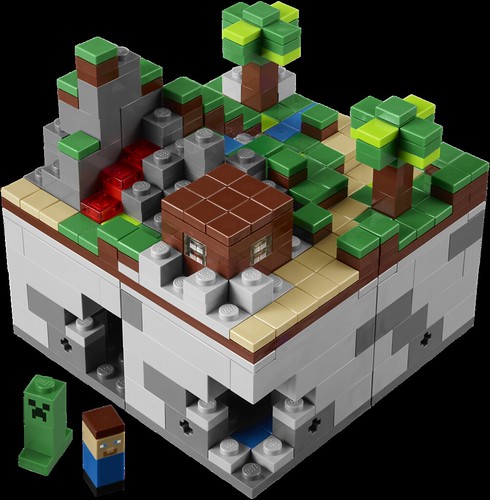 If you’re like me, you don’t live anywhere near Copenhagen, Denmark where LEGO World is underway from now until February 19. It is there where the official LEGO Minecraft set was unveiled just moments ago. I’ve been fortunate enough to be sent the official pictures from the press release to share with you. It appears to be built in micro scale given that the mobs are about the same height as a microfig. I’m sure more pics will be up and available from attendees from the event soon. I’d keep my eye on flickr for pics.

The Minecraft set was the first set from the crowd-sourcing effort LEGO CUUSOO to reach the 10,000 vote threshold once the program went live world wide. The set consists of 480 pieces and will cost you $34.99 USD or €34.99 EURO. It’s available for pre-order starting TODAY from Mojang’s retail partner, Jinx. It will also be available through LEGO Shop@Home and select LEGO Brand Retail stores starting in the summer.

More official pictures below, official press release below that.

And yes, the micromobs are printed, not stickered. 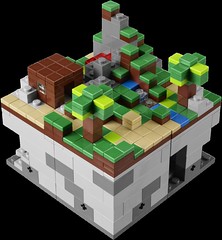 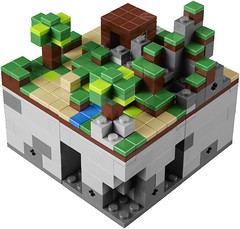 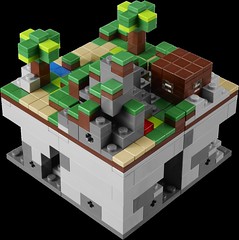 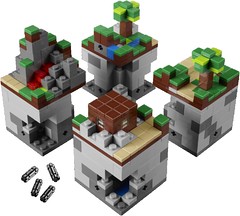 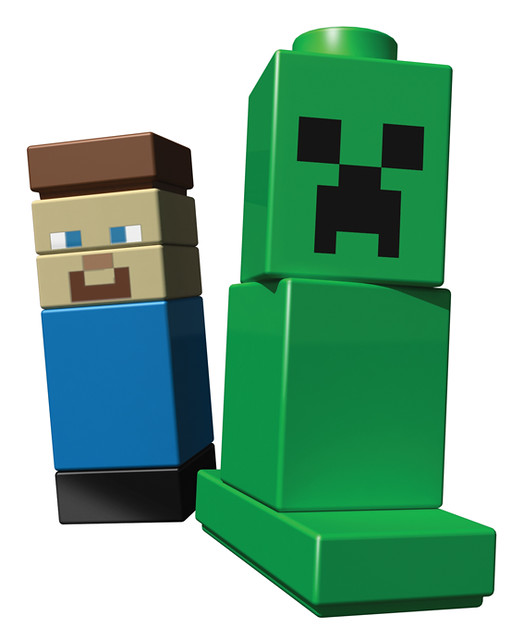 The new set, which was the first to receive 10,000 votes of support from users on the global LEGO CUUSOO idea collection platform, will be available for purchase in summer 2012, but can be pre-ordered from today, exclusively through Mojang retail partner Jinx.com for $34.99 â‚¬34.99 at https://www.jinx.com/LEGOMinecraft. The sets will also be sold in select LEGO brand retail stores and the LEGO online shop from summer 2012.

â€œLEGO Minecraft Micro World is designed to celebrate the essence of the LEGO concept and the Minecraft gaming experience,â€ said Paal Smith-Meyer, Head of the LEGO New Business Group. Each set features four cubic modular vignettes that can be connected to recreate the Minecraft experience in LEGO bricks. One Minecraft block is represented as one 1×1 LEGO plate with a tile on top – not a perfect cube, but the best approximation at the chosen scale.

LEGO Minecraft Micro World includes two of Minecraft’s most iconic characters, Steve and a Creeper, represented as “Micro Mobs.” The model presents a standard for building a Minecraft world that can be configured any way the builder likes.

The surface of the modules comes off to reveal mines and hidden resources beneath. Fans can build their own landscapes, stack cubes on top of each other, to build the world of Minecraft as they wish.

The product was developed in collaboration with four LEGO fans: Chris Malloy, Michael Thomas, Kyle Tingey, and Bjarne Panduro Tveskov. These fans developed concepts alongside LEGO designers and helped shape the product into its final version.

LEGO CUUSOO is a website where LEGO fans can submit their ideas for new LEGO products and collect votes to make their ideas become a reality. They can also vote for other usersâ€™ ideas. It can be found at https://lego.cuusoo.com.

Ideas that are supported by 10,000 votes have a chance of being selected to become part of the LEGO Groupâ€™s product portfolio. Consumers who have their ideas chosen will earn 1% of the total net sales of the product.

Mojang will donate the 1% proceeds from LEGO CUUSOO to charity.

For more on the co-creation process for LEGO Minecraft Micro World, see the LEGO CUUSOO blog at https://legocuusoo.posterous.com.

About The LEGO Group
The LEGO Group is a privately held, family-owned company, based in Billund, Denmark. It was founded in 1932 and today the group is one of the world’s leading manufacturers of play materials for children, employing approximately 10,500 people globally. The LEGO Group is committed to the development of children’s creative and imaginative abilities. LEGO products can be purchased in more than 130 countries. www.LEGO.com

About Mojang
Mojang is an indie game development studio based in Stockholm, Sweden. Founded by Markus â€œNotchâ€ Persson, Jakob Porser and Carl Manneh in October of 2010, Mojang has reached a user base of over 20 million registered users with its first game, Minecraft. Mojang is currently developing its second game Scrolls and published its first 3rd party game Cobalt in December. For more information, visit https://mojang.com/.