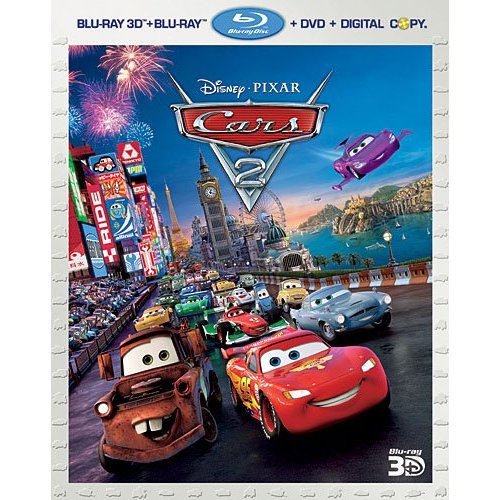 Update: I added the Toys’R’Us retailer exclusive below.

Cars 2 will be released in less than a week on Tuesday November 1. And since its the norm lately to offer highly anticipated releases in multiple formats, I thought I’d make a post on the different options available to you.

The cheapest option is to purchase a digital copy of the movie from iTunes for the low, low price of $14.99 for standard definition or $19.99 for one in HD. This is great if you’re agoraphobic or just really dig going completely digital.

The next option up is just a no frills DVD copy

of the movie for $16.99 from Amazon. The only extra you get is the Toy Story short Hawaiian Vacation and a new Mater’s Tall Tales short Air Mater.

For $8 more, you can get an equally bare (in terms of extras) Blu-ray/DVD combo pack in either Blu-ray Packaging

The Toys’R’Us version of the combo pack will run you $29.99 and may be a bit more appealing for us LEGO fans. It includes an exclusive bonus disc with “LEGO Cars 2 Animated Shorts, Videos with the LEGO Cars 2 Designer, LEGO Cars 2 Trailer and More!” You can check out the animated shorts and the LEGO Cars 2 trailer on the Cars minisite on LEGO.com. I wouldn’t be surprised if the all of the video content on the minisite made it onto the bonus disc.

Walmart’s exclusive package for the Blu-ray/DVD combo pack will run you $29.96 and you get a Finn McMissile die-cast car which all signs point to being a normal version that is currently clogging up the pegs at every toy aisle you walk into. So basicall you’re paying a $5 dollar premium for a $3 dollar toy on a bare bones combo disc release. The Toys’R’Us page doesn’t specify whether or not the bonus disc is in DVD or Blu-ray format. If the Pirates of the Caribbean LEGO shorts are any indication, then I would guess it would be on DVD but don’t hold me to it. I’ve been known to guess wrong.

features the following: Blu-ray 3D, Blu-ray, DVD, Digital Combo, and a Bonus disc. You get the same shorts as the DVD and Blu-ray release as well as Nuts and Bolts: A Sneak Peek of Cars Land, World Tour â€“ Interactive Map, deleted scenes, short documentaries, and set explorations from the different cities in the movie.

Target’s exclusive release of the movie is the five-disc combo, same as the one outlined above, but also features a snow globe that lights up. You pay a hefty premium for said globe, though, $49.99.

if you order Cars 2 combo pack along with another Pixar combo pack dvd. Wall-E looks like a good choice.

It seems contradictory that I would make such a post since I ended up hating it, but something compels me to buy it anyway. It might be the combo pack and the Amazon deal. I don’t know. I’m sick.