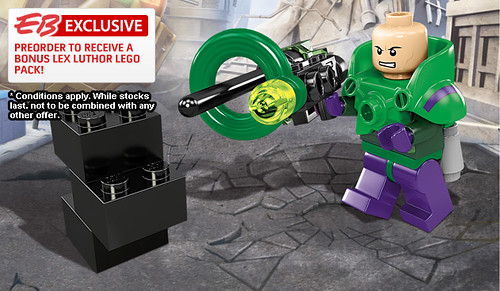 It looks like there may be hope for those that found the Lex Luthor figure included in 6862 Superman vs. Power Armor Lex a little bland. I mean, who shows up to battle Superman in a three piece suit? Ok, so they did scrap on occasion in more formal attire and sometimes even in ridiculous shirtless bare-knuckle boxing matches. However, don’t get too excited just yet (I mean about the figure, not the shirtless boxing) because this deal has only popped up on the Australian EB Games site so far and even if the same deal gets offered in other countries it still means pre-ordering the LEGO Batman 2: DC Super Heroes game at full price. I love the LEGO games and if this offer hits Canada it will be the first time I buy one without waiting for the usual price drop, but I just wouldn’t want to risk missing out on this classic look. Fingers crossed!