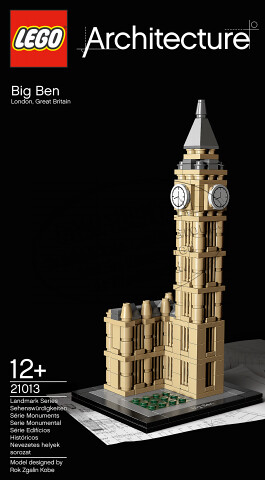 Update: We’ve received a better image of the Big Ben set sans box. Click through to visit the flickr page where you can view a hi-res version: You know, as Architecture sets go, this one doesn’t look too bad. The box shot seems to have traces of a watermark on it though. It’s priced at $29.99 / â‚¬29.99 and will be available starting June 1. Official press release below:

BILLUND, Denmark â€“ Big Ben, one of the UKâ€™s most recognizable buildings and a global symbol of Victorian London and the Gothic Revival style, has been recreated as the latest set in the LEGOÂ® Architecture series.

Big Ben, officially known as the Clock Tower, has stood at the north-eastern corner of the Palace of Westminster in London for more than 150 years. It was designed by the unlikely team of Classical architect Charles Barry and Gothic Revival pioneer Augustus Pugin and completed in 1859.

Big Ben is the fourteenth model in the LEGO Architecture range, which uses the LEGO brick to interpret the designs of iconic architecture around the world. It is the first model to be designed by Rok Zgalin Kobe from Slovenia who joins Adam Reed-Tucker as a LEGO architect.

â€œThe most challenging in creating this model was representing the richness of 19th century Gothic Revival architecture in a scale usually more appropriate for modern or contemporary architecture of smooth surfaces and clean lines,â€ said Rok Zgalin Kobe.

Charles Barry won the competition to build the new Palace of Westminster in January 1836. His initial designs were without the clock tower that would become known as Big Ben. As his own style was more Classical than the increasingly popular Gothic Revival, Barry asked for assistance from Augustus Pugin, a leading light of the movement that left its indelible mark on the Victorian era around the world. The design of the interior of the palace and the clock tower are thought to be his work.

LEGO Architecture products features well-known buildings, and the work of important architects Aimed at inspiring future architects, engineers and designers as well as architecture fans around the world, the range contains a booklet featuring step-by-step building instructions that is prefaced by exclusive, archival history, information and photographs of each iconic building, its design origin, its architect and its architectural features.

The LEGO 21013 Big Ben is available for purchase from June 1 in LEGO brand retail stores, LEGOLAND Stores and online at https://shop.lego.com/. The product is designed for ages 12+ and includes a booklet with facts and history about Big Ben. Recommended retail price is $29.99 or â‚¬29.99.

ABOUT THE LEGO GROUP

The LEGO Group is a privately held, family-owned company, based in Billund, Denmark. It was founded in 1932 and today the group is one of the world’s leading manufacturers of play materials for children, employing approximately 9,000 people globally. The LEGO Group is committed to the development of children’s creative and imaginative abilities. LEGO products can be purchased in more than 130 countries.