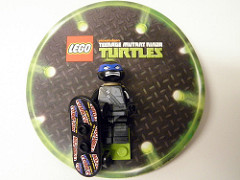 A lot to chew on from this year’s NYCC LEGO booth. We got two new exclusive TMNT minifigures and a new collectible Star Wars tin set. Honestly I was extremely disappointed that there were two exclusive Ninja Turtles minifigures for NYCC after SDCC had four awesome super hero minifigs earlier this year. Rather than a short cycling line to pick up minifigures, they used a raffle system for the black Ninja Turtle with an awesome NYCC-stickered skateboard. The winning numbers at the end of the day implied an extremely limited run of these minifigures. Iâ€™d estimate 500 or less of these â€œDark Turtles,â€ though we never got an official count. The other exclusive was a limited edition of 300 Krang androids, for which you had to dress up like a Ninja Turtle at 10am Saturday morning at Rockefeller Center. I decided to go for exclusive Landspeeder tins instead, but fellow LUG member Bill went and let me take pictures of the minifig. Itâ€™s pretty cool, I sort of wish I braved the cold and went with him. Luckily I won a â€œDark Turleâ€ as well as pick up Landspeeders for friends and myself. The â€œDark Turtleâ€ is really cool in-person. Love the skateboard he comes with, though itâ€™s a sticker rather than printed. The new shell backpack is nice, but I wish theyâ€™d done it as a neck bracket that attaches to a shell piece. Then we could get all Mario Kart up in here and make a blue shell. The tin was the third in a line of event exclusives, including the previous Darth Maul and Boba Fett tins from SDCC and Star Wars Celebration. $40 is really steep for such a small set, but it was a limited run of 1000 and extremely hard to get, so itâ€™ll retain its value if not increase. Itâ€™s also a nice classy souvenir. The booklet is high quality with a spine. Iâ€™ll never turn down something Original Trilogy. As it’s so easily replicable I decided to keep mine sealed. I got #307/1000. There were tickets given away at the beginning of the show every day, but unless you had early access they were nearly impossible to get. I was able to get several over the weekend thanks to my exhibitor access. Itâ€™s a nice little set, but youâ€™re really just paying for the tin. There a couple of new colors or rare elements, but anyone should be able to make a close approximation without any trouble. Brickset has a .pdf of Billâ€™s instruction photos.