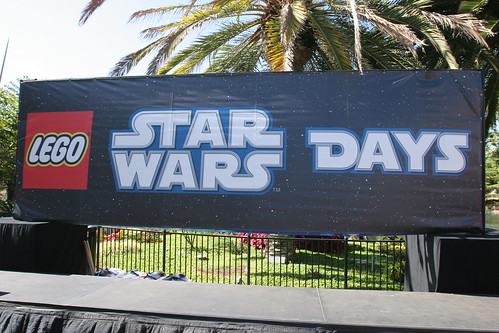 LEGOLand California held their annual Star Wars Days this past weekend August 7th and 8th and what a glorious weekend it was! The AFOL community was well-represented by SANDLUG and LUGOLA with members driving in from as far as Fresno, CA and Las Vegas, NV. With this year being the 30th anniversary of Episode V, there was a slight emphasis on Empire-based MOCs.

As a follow up to his incredible ANH-themed chess set, Brandon Griffith (icgetaway) completed his Hoth Chess set at the 11th hour and had it on display. One picture I was not able to get was the storage underneath the actual chess board where each piece had it’s own compartment. Brandon will be taking better pictures of his set, so keep eye out for those in the near future.

Matt (monsterbrick) brought an incredible MINI-scale diorama of key scenes from ESB as well as a few from ANH, ROTJ and TPM.

One of my favorite displays was the Battle Tauntaun scene, “Defense of the South Slope” (I hope I got the title correct). Paul Meissner (legosamurai) came up with a BRILLIANT idea of the Battle Tauntaun. Fradel Gonzales, Brandon Griffith, Paul Lee (polywen), Andrew Lee (onosendai2600), and others each contributed a tauntaun outfitted with weapons and armor to help the Rebels defend against Imperial forces.

Mark Borlase (brickplumber) stole the show with his most epic Hoth display. Most everything was custom made. His AT-ATs rival the best out there, and his snowspeeder model is the best I’ve seen.

Participants in the Fan Gallery received a goody bag for their contribution and work in manning the booth. Inside the goody bag was a poster featuring all the minifigures in sets released in 2010, the 2010 product catalog that was only previously available from this year’s Toy Fair goody bag, a LEGOLAND California comemmerative DUPLO brick, a White Boba Fett minifigure, and two complimentary passes to the park. All but the complimentary passes were available to guests of the park. The poster and DUPLO brick were given out along with badges for the 501st’s Droid Hunt game; all you had to do was wait in line. On Saturday if you made a purchase of LEGO Star Wars product equaling $35 or more, you would have received the 2010 product catalog. On Sunday, they either ran out of product catalogs or planned this all along, but on Sunday instead of receiving the catalog you would instead get a White Boba Fett with your purchase.

Members of the 501st were in attendance for photo ops and to manage their Droid Hunt game.

Of course, Star Wars Days wouldn’t be complete without a costume contest now would it? I only attended Saturday’s contest as they had one for Sunday as well. There were two age categories: 8 and under and 9-15 which is different than years past as the latter category at one point was 9 and up, pitting adults against children, which we all know isn’t a fair fight. The winners of each category are below:

You can see all the participants in the costume contest in the flickr set.

Despite getting sunburned, I had a blast this weekend. I got to hang out with Ryan and Don and have a mini FBTB Con on our own. The LEGO communities of Southern California are great and I consider myself blessed to be able to participate in events like this with such cool fellow AFOLs. I look forward to next year.