Back at E3, there were two Marvel games shown in trailers that were previously announced but we had sparse details about: Team Ninja’s Marvel Ultimate Alliance 3 and Crystal Dynamics’ Marvel’s Avengers. Both got videos at E3, and there was a huge and stark difference… one looked engaging and groundbreaking, and the other one was shown by Square Enix.

Fast forward a few months, and we already received, and for my part, was mostly let down by, Ultimate Alliance 3. It was a decent enough game, but had real issues with balance (regular enemies could do huge damage for no reason, while the bosses were mostly boring and trivial) and was honestly just forgettable. Plus, it was just terrible to play in handheld mode, the best way to play the Switch.

Marvel’s Avengers was incredibly hyped up going in to the conference, because this was Crystal DynamicsÂ  and Square, and there’s just a base level that we can expect. CD is responsible for the Tomb Raider games, and the “new” trilogy in that series have all been great and fun to play. They clearly now how to make a game, and it could be fun to see their take on making a Super Hero game (a genre that is notoriously difficult to do right in games).

The problem is that what ended up getting shown looked boring, and had a huge uncanny valley problem in what they showed off. It isn’t based on the Marvel Cinematic Universe, but everything about the look and feel of the game felt like it was an adaptation… but just not quite. The voices weren’t right, because they weren’t supposed to match the MCU, and the look needed to be more distinct. More than that, it focused on characters that we’ve seen so much in the past few years that it didn’t feel fresh at all.

At New York City Comic Con on Friday, they finally gave us a glimpse of something so much more. The unnamed female narrator of the original E3 trailer is none-other than Kamala Khan, a.k.a. Ms. Marvel – the best character Marvel has introduced in the past twenty years*. This trailer is mostly cinematic, but we get a brief glimpse of gameplay that shows she’s a playable character and we’re going to get her power set in the game in a big way (she’s an Inhuman that can manipulate her shape to grow, shrink, etc… somewhat like Mr. Fantastic but a bit more nuanced – also, she is an Omega-level comic book nerd). 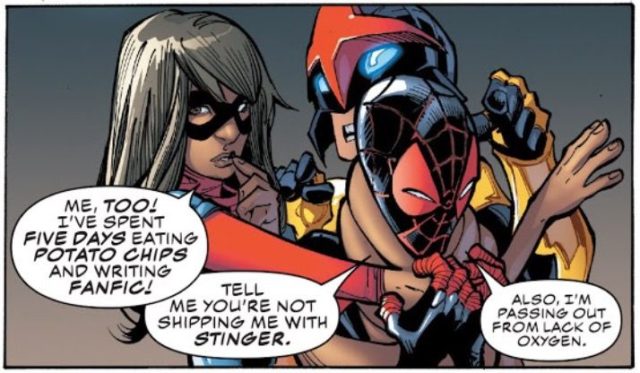 While two-thirds of this story are still classic characters, we get Bruce Banner over Hulk, and the story here starts to feel far more its own thing. There’s still that familiarity, but this Tony Stark looks different enough, and this Bruce acts different enough, that it doesn’t feel so old hat.

I’m not sure I’ve ever had a game trailer turn me around quite as quickly as this one has, but now I’m hoping that this game will scratch that same itch Ultimate Alliance 3 promised – with new characters we really haven’t had a lot of… except, you know, better.