We’re 6 weeks away from the release of the “last” of the Avengers movies to feature the original group (there will most certainly be more of them in the future), and we now have what is likely to be the last drop. It’s another in what Disney/Marvel has come to do without peer in movies… a trailer that will get you excited and thrilled without giving awayÂ anything about the story. Seriously… goosebumps here.

There are a few things that I have questions or observations about in watching this, though. There’s only perhaps 30 seconds here we haven’t seen before, and a lot of new voice overs… the rest is mostly stuff from previous movies that fits in with the idea that this is the climax of a story that’s been unfolding since 2008’s Iron Man.

Scott looks as confused as ever, so in character, but how long was he stuck in the Quantum Realm? We know there was going to be a bit of a time skip between Infinity War and Endgame, but it’s hard to tell what it is here. Those trash cans have clearly been there for awhile… or it’s my neighbors from up the street that just seem to have an eternal pile of stuff waiting for pick up at any given time.

Hawkeye is clearly someone who’s been wrecked pretty hard by the snap, so we can assume his family was affected by it. Again, the time thing is what’s sort of confusing here, because he sports 4 different hairstyles in the trailer. I counted, because I was specifically looking for this majestic cut. Hawkeye… please keep this style forever. 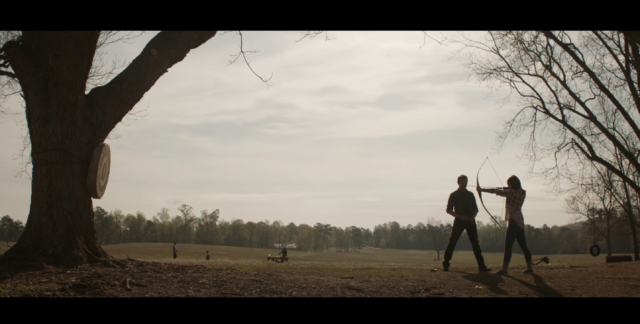 Okay, it should be noted that Hawkeye most certainly has powers too. Based on the look, that was probably pre-snap, or we could be looking at what happened to Hawkeye during the snap, and we’re going to have our hearts shattered.

But, more importantly, I want to focus in on the fact that he’s giving an archery lesson to a young woman. I mean, this could be his daughter, Lila, and we do see what is probably his home in the background (though I question the logic of a tire swing half a mile from the house)… but she was 7-8, tops, in Age of Ultron. During the snap, she would be 10-11, and that looks more like a 20+ year-old.

Which suddenly has me irrationally hopeful that it could actually be Kate Bishop, also known as Hawkeye, from the comics. Seriously, she’s awesome, and a similar trainwreck to how Hawk Guy is. We’ll have to see, but I rewatched the trailer a few times just for this scene.

Last bit in here is this shot. I don’t have any specific observations, I just thought it looked really cool. While I want a Rabbit and Angel buddy cop movie, I’d gladly throw War Machine into the mix too.